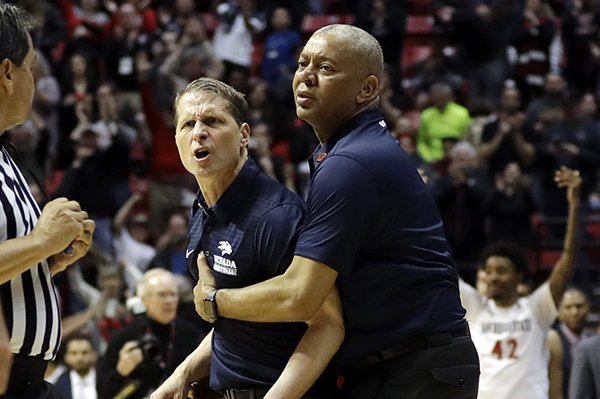 FAYETTEVILLE -- Before tonight, the last time Eric Musselman and Johnny Jones coached a game in Walton Arena, they were on the visiting bench with LSU.

It was the regular-season finale on March 7, 2015, and the Tigers -- with Jones as their head coach and Musselman as an assistant coach -- beat the No. 18 Razorbacks 81-78 on Keith Hornsby's three-point basket from the corner at the buzzer.

"I think the fans at Arkansas really should boo Eric when he comes out, because he designed that last play for Hornsby," Jones, now Texas Southern's coach, said with a laugh. "It really was a miraculous shot and a magnificent game.

"Winning that game meant a lot as far as helping us get into the NCAA Tournament."

Fans won't be booing Musselman -- who is in his first season as the University of Arkansas coach -- when the Razorbacks (3-0) play Jones and Texas Southern (0-3) at 7 tonight. Arkansas has beaten Rice, North Texas and Montana by an average of 29.7 points.

"I think Eric's done a tremendous job of coming in and setting the tone for his team and the way they're preparing and playing," Jones said. "He's really getting the best out of his guys.

"They're a very sound and solid defensive team. I think the players have really transitioned well and bought into his system."

[Video not showing up above? Click here to watch » https://www.youtube.com/watch?v=3Cz3pkVVBMo]

Musselman had been an Arizona State assistant for two seasons and was considering a return to the NBA as an assistant coach with Flip Saunders and the Minnesota Timberwolves when Jones called after the 2013-14 season and asked him to come to Baton Rouge and interview for a job at LSU.

Saunders had played for Bill Musselman -- Eric's father -- at the University of Minnesota.

"It would have been really comfortable for me because I've known Flip for so long," Musselman said. "Johnny called the same week, actually."

Musselman had never met Jones, but he was friends with David Patrick, an LSU assistant coach at the time who is now the head coach at California-Riverside.

"David said, 'Hey, get on a plane to Baton Rouge. At least come have dinner with us if nothing else,' " Musselman said. "I really liked Coach Jones a lot.

"Sat down with the family and we wanted to stay on the path of college coaching, and so I passed up what could have been a really comfortable situation with the Timberwolves to go with Coach Jones, and it was awesome."

Jones said he was looking to add a coach with an NBA background, and Musselman was a perfect fit.

"Eric is what I refer to as a basketball junkie," Jones said. "He's just eaten up with it really 24 hours, seven days a week. That's his focus.

"When you're in the business that we're in, you want those type of people around you. He's one of those guys that he never ceases trying to learn and to get better at his trade."

When Jones was fired as LSU's coach after the 2016-17 season, Musselman had an opening for an assistant on his staff because Dave Rice went from Nevada to Washington.

Musselman said he wanted to hire someone with head coaching experience -- Rice had been a head coach at UNLV -- and he added Jones.

"It just doesn't happen often where you're an assistant for a guy, and then he's an assistant for you," Musselman said. "I just kind of begged Coach Jones to come help me, and he did and it worked out for him."

After Jones helped Musselman and Nevada go 29-5 and advance to the 2018 NCAA Tournament Sweet 16, he was back as a head coach at Texas Southern.

"Even though he was an assistant with us, I look at Coach Jones as a mentor in a lot of ways."

"It's unique in a sense, and I think it goes to show about relationships and the business that we're in," Jones said. "Eric helped us at LSU, and I hope I was able to reciprocate and help him at Nevada after I left LSU and support his team and his program in the same fashion."

Jones, in his 19th season as a head coach, said taking an assistant's job at Nevada was easier because of how close his family became with Musselman's in Baton Rouge.

Musselman said his wife, Danyelle, was instrumental in persuading him to take the LSU job and stay in college coaching rather than making a return to the NBA.

"I think Danyelle is really tremendous for Eric in all aspects of his life," Jones said.

Jones said he welcomes the challenge of playing at Arkansas, especially because scheduling teams from Power 5 conferences became more difficult after Texas Southern won road games at Baylor, Oregon and Texas A&M last season. But Jones said he would prefer not to play a team coached by a friend like Musselman.

Tonight's game is part of the Collegiate Hoops Roadshow -- a multi-site, on-campus exempt event that allows teams to add an extra game to their schedule -- and was arranged by Russ Potts Productions, a sports marketing company.

"I'm looking forward to getting this game behind me," Jones said. "Because I don't enjoy playing against friends."

Musselman will coach against another friend when Arkansas plays South Dakota on Friday night in a game that's also part of the Collegiate Hoops Roadshow. South Dakota Coach Todd Lee was an assistant for Musselman in the CBA with the Rapid City (S.D.) Thrillers.

"We didn't schedule Texas Southern and we didn't schedule South Dakota because those guys are friends, and I would just prefer to play somebody else," Musselman said. "But the good thing is when you do play a friend, when the game is over you're able to exchange ideas and thought processes.

"I think there is some benefit to doing it because certainly I want Coach Jones to win every game possible other than Tuesday night, and same thing with South Dakota after our game with them on Friday."