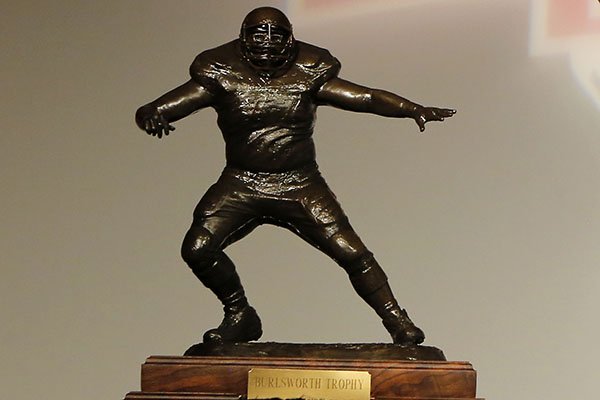 The three finalists will be honored and the 10th winner of the award announced on Dec. 9 at 12:45 p.m. at a luncheon in Springdale hosted by the Brandon Burlsworth Foundation and the Springdale Rotary Club.

The award has been given annually since 2010 to the nation’s top player who began his career as a walk-on like the trophy’s namesake, Brandon Burlsworth.

Burlsworth had no Division I scholarship offers before walking on at Arkansas and eventually developing into an All-American in 1998 and the No. 63 pick in the 1999 NFL Draft by the Indianapolis Colts. Burlsworth, of Harrison, died in a car accident 11 days after he was drafted.

Davis, a four-time All-American hurdler, has 47 tackles and 12 kickoff returns for 149 yards this season. He was a mid-season All-America selection by Athlon Sports and The Athletic.

Blankenship is second in the SEC and 14th nationally with 92 points. He has converted 19 of 23 field goals with a long of 50 yards and is perfect on extra points.

Willekes, a preseason All-America pick and the Big Ten’s defensive lineman of the year in 2018, has 59 tackles, 6.5 sacks and two fumble recoveries this season.