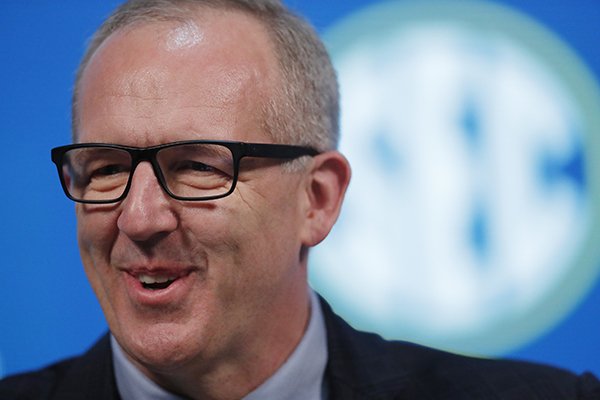 Arkansas Athletic Director Hunter Yurachek fired coach Chad Morris on Nov. 10 after Morris was 4-18 in a year and a half with the Razorbacks.

"It has been great working with Hunter the last two years," Sankey said at the Little Rock Touchdown Club's meeting Monday at the DoubleTree Hotel. "He has been very easy to work with and will make the right hire for the football team."

Sankey said with any coach that an SEC school wants to hire -- head or assistant -- that school should let the SEC know so it can do background checks on the prospective hires.

"We do require schools to inform us about who they are hiring for any sport," Sankey said. "This allows us to look into any issues and inform the school."

Barry Lunney Jr. is the Razorbacks' interim coach and will lead the team in the final two games at LSU on Saturday and against Missouri on Nov. 29 at War Memorial Stadium in Little Rock.

Sankey said the process of transitioning coaching staffs is never easy for any school. He added that he doesn't call head coaches immediately after they are fired, but he does plan on talking to Morris in the future.

Sankey, 55, became the SEC commissioner June 1, 2015. He is the eighth commissioner in conference history after he took over for Mike Slive.

Before joining the SEC, Sankey was the commissioner of the Southland Conference from 1996-2002.

Arkansas joined the SEC for the 1991-92 basketball season and began playing football in the league in 1992. Sankey said that despite the football program's struggles over the past eight seasons under John L. Smith, Bret Bielema and Morris, the Razorbacks are a viable member of the conference with their success in baseball, softball, women's soccer and track and field.

"Arkansas absolutely belongs in the SEC," Sankey said. "There has been success in the SEC. It may not have been recently, but these things come in cycles."

In other Touchdown Club news Monday, founder David Bazzel announced that two-time Heisman Trophy winner Archie Griffin will be the new guest speaker at the club's season-ending event Jan. 9 at the DoubleTree Hotel in Little Rock.

Griffin replaces 1982 Heisman Trophy winner Herschel Walker (Georgia), who had to back out of his speaking appearance because of scheduling issues. The Jan. 9 event also has been moved from the evening to a luncheon at 11:30 a.m.