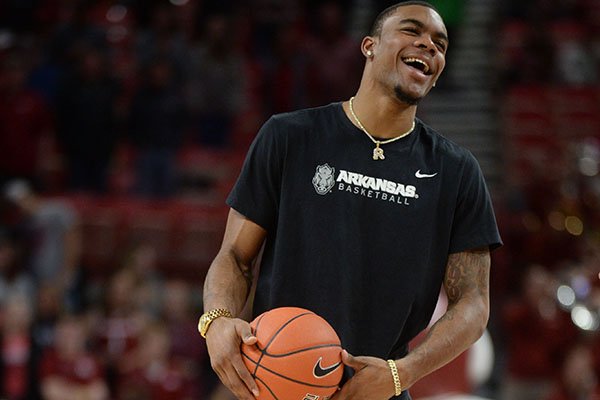 Arkansas forward Reggie Chaney is shown prior to a game against Montana on Saturday, Nov. 16, 2019, in Fayetteville. Chaney, a sophomore, missed the first three games this season while serving a suspension for an undisclosed violation of team rules.

FAYETTEVILLE -- University of Arkansas Coach Eric Musselman, asked Monday whether suspended forward Reggie Chaney would play this week, said he hopes to make a statement tonight about his status.

Musselman announced in a statement two hours before the season opener against Rice on Nov. 5 that Chaney had been suspended indefinitely.

Chaney has sat on the bench during the three games he's missed and continued to practice, drawing praise from Musselman for his work habits and attitude.

So it's hard to believe a Musselman statement about Chaney before tonight's Arkansas-Texas Southern game would be anything except that the 6-8 sophomore's suspension has been lifted.

Why would Musselman make a statement that Chaney remains on suspension? He didn't have a statement before the second and third games against North Texas and Montana that Chaney was still suspended.

"Like I said, we'll let everybody know," Musselman said when asked whether his statement will be that Chaney is off suspension.

Musselman paused for several seconds when a reporter said he couldn't see a reason Musselman would announce anything about Chaney other than he'll play tonight.

"We might," Musselman finally said with a smile. "You never know."

"He's been battling some injuries," said Jones, who didn't want to be specific. "We're hopeful that we'll get him back, but I'm not sure if he'll play [tonight]."

Ewing was the preseason pick for Southwestern Athletic Conference player of the year after averaging 9.3 points and 5.2 rebounds last season.

After Ewing played in the first two games when the Tigers lost 77-42 at San Diego State and 69-63 at Wichita State, he missed the Tigers' 88-69 loss at South Dakota on Friday night.

"Obviously, he's our best post player returning," Jones said. "Not having him available hurts us. It takes away from our ability to be as good as we'd like to be right now."

The Razorbacks have started the season in impressive fashion by beating Rice 91-43, North Texas 66-43 and Montana 64-46.

"We're not satisfied at all," said junior guard Mason Jones, who is averaging 22.3 points and 6.0 rebounds. "We're 3-0, but it's three games we're supposed to win. So as the competition gets harder, the more you're going to see our true colors."

Texas Southern is 0-3, but the Tigers have lost at three places where many teams would fall -- San Diego State, Wichita State and South Dakota.

"I think because they play so many road games in nonconference and they play in so many big buildings and they play in front of good crowds, they're kind of immune to it," Arkansas Coach Eric Musselman said. "The guys that played last year know the euphoria and know the type of excitement that they can have with a big win.

"I don't think they'll be fazed at all [playing at Arkansas]. It's a team that understands every year that they're going to play a lot of these nonconference games, so that's what makes them scary."