Davis signs off on UA's interest 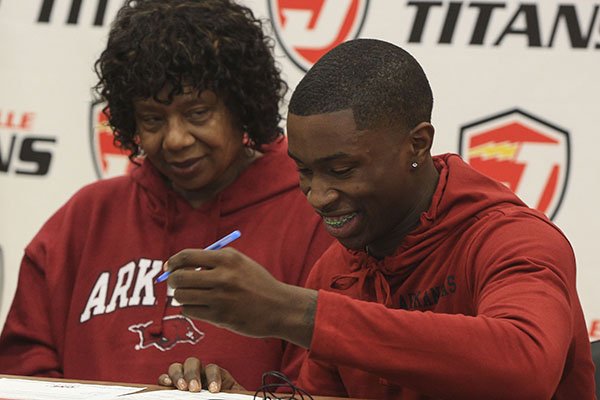 Davonte Davis signs to play basketball at the University of Arkansas while his grandmother Yvette Davis watches during a ceremony Tuesday, Nov. 19, 2019, in Jacksonville.

Jacksonville guard Davonte Davis was the first player to orally commit in University of Arkansas Coach Eric Musselman's 2020 class, and the senior made it official Tuesday when he signed his national letter of intent.

"I've worked really, really hard for this day, and now it's a reality," said Davis, who signed his document at Titan Arena in front of several family members and students. "When I was small, this is something that I never imagined. But with the support of my family and hard work, anything's possible, and I can't wait to get up on the Hill."

Rated as a four-star prospect by ESPN and the nation's No. 80 overall recruit, Davis, 6-4, 175 pounds, chose Arkansas over scholarship offers from Texas Tech, Mississippi, Auburn and Oregon, among others. He averaged 18.5 points, 6 assists and 5.3 rebounds per game last season.

Davis initially was offered a scholarship by then-Razorbacks coach Mike Anderson when he was a sophomore at Jacksonville Lighthouse, but he pledged to Oklahoma State early in his junior season after transferring to Jacksonville. Anderson was fired in March after eight seasons, and Musselman was hired a month later from Nevada. Davis decided to reopen his recruitment Oct. 1, and it didn't take long for Musselman and his staff to make an impression.

"They came down the day that I de-committed from Oklahoma State," he said. "When they came down, I was really shocked because I didn't expect for it to happen that fast. For them to show that interest that they really wanted me to play for the program ... that's something that other coaches really didn't show."

Davis was on hand for the Razorbacks' Red-White game four days after de-committing from the Cowboys and received a scholarship offer Oct. 9. He orally committed Oct. 12.

"[Davis] is a heck of a player, and Musselman is going to get the best out of him," Jacksonville Coach Victor Joyner said. "He's a no-nonsense type of guy, and if he can get him to tap into his full potential, Davonte Davis has a chance to play after college."

Joyner may have one of the better teams he's had since he's been at Jacksonville. Aside from Davis, the Titans have others who are drawing Division I interest, including junior forward Ryan Maxwell.

Joyner said he expects Davis to continue to do the same things he's done since he's been with the Titans.

"He's going to be Devo and play ball," Joynor said. "We don't expect him to do anything but what he's supposed to do. When he doesn't, he's going to get his chain yanked just like everybody else gets their chain yanked.

"But it's always good to see someone from their city go to a major university. We only have one in this state, and the University of Arkansas is the creme de la creme. I've coached 28 years and have had a bunch of Division I players, but I'm just glad to see some of our homegrown talent staying home."