For Lunney and Barrett, radio show like old times 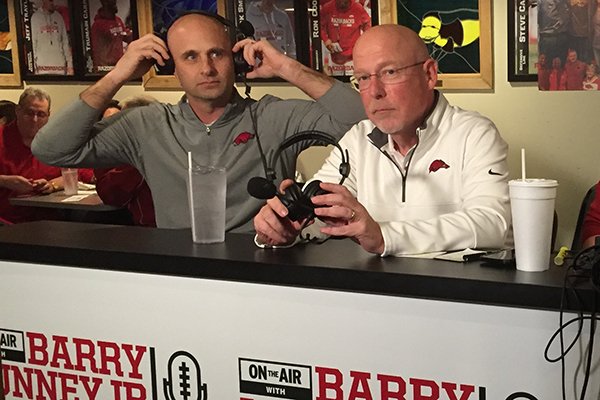 FAYETTEVILLE — For Barry Lunney Jr., the role of Arkansas’ interim football coach also comes with another fill-in gig on the radio.

Lunney, who will coach the Razorbacks in their final two games of the 2019 season against LSU and Missouri, attended the Catfish Hole restaurant on Wednesday for the first of two installments of “On the Air with Barry Lunney Jr.” on affiliates of Razorback Sports Network.

As the show began, Lunney reminded that he and Arkansas football play-by-play voice Chuck Barrett, who hosts the coach’s show, had been on the radio together several times before. In 1996, Lunney was the color commentator for Razorback baseball broadcasts anchored by Barrett.

“I don’t know if it was a failed experiment or it was a short experiment,” Lunney said, “but we had fun together.”

Lunney played football and baseball for the Razorbacks. He was a four-year starting quarterback from 1992-95, and lettered as a pitcher for Norm DeBriyn’s baseball team from 1993-95 and in 1997.

His baseball radio experience came during a redshirt season as he prepared for the NFL Draft.

“Because I was still in the (baseball) program I used to steal Coach DeBriyn’s signals from the press box,” Lunney said, “and say, ‘Boy, this would be a great time for a hit-and-run.’ And then they’d hit-and-run and people thought I was pretty good.”

Lunney went undrafted as a football player in 1996 and turned down a 45th-round MLB Draft offer from the Minnesota Twins that year to play baseball for the Razorbacks again in 1997.

He finished his final college season with a 4-3 record in 14 appearances - including 10 starts - and a career-worst 6.84 ERA in 50 innings. He was drafted again by the Twins in 1997 but only spent a short time in the minor leagues before returning as a graduate assistant on Houston Nutt’s first Arkansas football staff.