No. 20 Razorbacks continue to roll with rout of Belmont 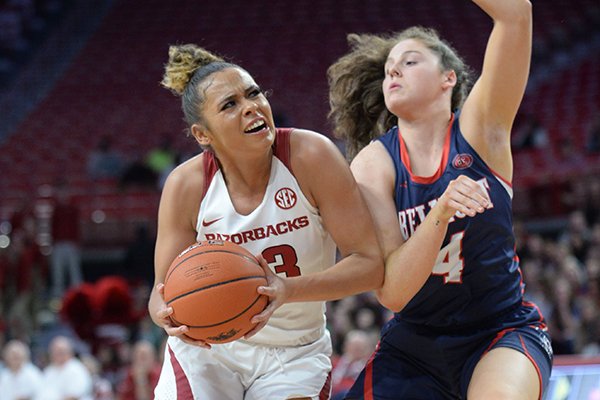 The Razorbacks made their first five shots to start the game and never let the Bruins get going en route to a 91-60 win.

Arkansas coach Mike Neighbors acknowledged the strong start was no question the difference.

“I think the fact that we came out so aggressively in the first four minutes of the game, I think that really set the tone,” Neighbors said. “And then we got them in foul trouble and they had to play some lineups they aren’t used to playing.

“They look up and it’s 26-11 at the end of the first and we’ve had some missed shots that were wide open.

“Again about as good we could play in the first half. I think we had one turnover through about 18 minutes of it, really quality shots and make a whole bunch of them. Probably our most complete game of the five that we’ve played.”

Arkansas (5-0) used an incredible 23-2 first-half run to put the game away early. Belmont (3-2) scored back-to-back buckets to get within 13-9, but Chelsea Dungee and Makayla Daniels took over from there.

The duo combined for the first 15 points during the 23-2 explosion.

Daniels, the reigning Southeastern Conference Freshman of the Week, started the spurt with her own 8-2 run to give Arkansas a 21-11 advantage. Dungee followed with a driving layup, a 3-pointer and two free throws and the lead had ballooned to 28-11 less than a minute into the second quarter.

Alexis Tolefree ended the run with two free throws for a 36-11 lead with 7:23 left in the first half.

Dungee, a 5-11 junior guard, said the good start is a focal point for the Razorbacks.

Dungee, Daniels and Tolefree combined for 44 of Arkansas’ 55 first-half points. They made 15 of 21 shots and 7 of 11 from 3-point range combined. Dungee led with 19 in the first half.

Dungee and Daniels led the way with 21 points each for the game, while Tolefree added 20.

The Razorbacks have dominated opponents, winning every game thus far by 30 or more points, but that’s been a surprise, particularly given the team’s injuries, Neighbors said.

“If you would have told me when we made the schedule back this time last year that we would be without Jailyn Mason, Kiara Williams, Destinee Oberg and Macy Weaver against the lineups we knew we were gonna be facing, I probably would have taken 4-1, 3-2 and close games in the others.

“I would have never predicted it. I think it’s about us. We’ve shot it that well. We’re putting in new things each week. Even if you’re prepared we’ve some twists that come in each week.”

Ellie Harmeyer, a 6-foot senior, led all scorers with 24 points for Belmont, while Maddie Wright was also in double figures with 11.

Arkansas won’t return to Bud Walton Arena until Dec. 7 when it plays host to Kansas State. The Razorbacks will next play at California on Saturday afternoon. The tip-off to slated for 4 p.m. Central time.