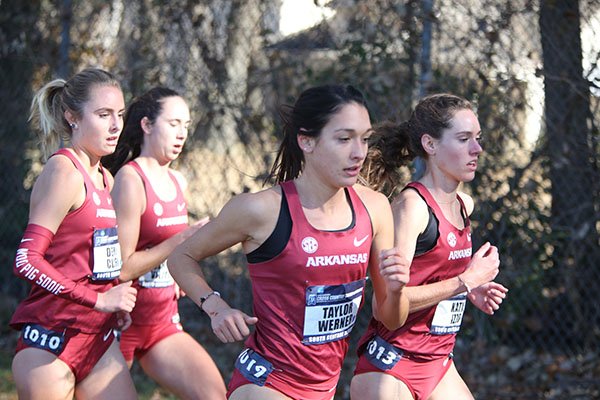 Only Oregon and Texas, once each encompassing a fall semester/spring semester academic year, have won the women's collegiate triple crown.

Lance Harter, becoming the McDonnell-coaching version for women's track and cross country, has coached all four national championships amassed in all of UA women's athletics. His teams have won two each in NCAA Indoor and Outdoor track, including last March and last June.

"I just knew last year as the track season evolved that we had a lot of positive momentum," Harter said. "You'd just see little snippets of bright light and you'd go, 'If this happens and this happens, we could be one heck of a cross country team next fall."

It has happened, though not exactly how he envisioned.

It's been "oh my gosh" even without her. Not only without Robinson, but often without junior top-five runner Lauren Gregory. Gregory was sidelined on and off with a painful foot stress reaction. She's close to full tilt for Saturday after sitting out Arkansas' first-through-fifth South Central Regional qualifying sweep last Friday.

Gregory's absences actually deepened the team. Senior Maddy Reed had to come on as the fifth and final scorer.

She's done so admirably including passing several in the stretch at last Friday's meet to complete Arkansas' sweep at the South Central Regional that Arkansas hosted.

Nobody could have known what graduate transfer Katie Izzo of Cal Poly San Luis-Obispo would do. Seldom at Cal Poly-SLO able to train very long without foot injuries, Izzo at Harter's urging got advice from Dr. Dan Fulmer, a retired podiatrist and former UA team doctor, who was lecturing in California. Between the Dr. Fulmer-prescribed exercises and Harter's coaching and training, Izzo does what she's never done.

"Her first cross country race to win ever was the SEC meet," Harter said.

How the team has taken to Izzo and all take to each other manifested in Werner, Izzo, Viljoen and Clark crossing the winning finish together last Friday.

"It made for a cool photo," Clark said.

They know the coolest would be if snapped atop the first-place podium in Terre Haute.