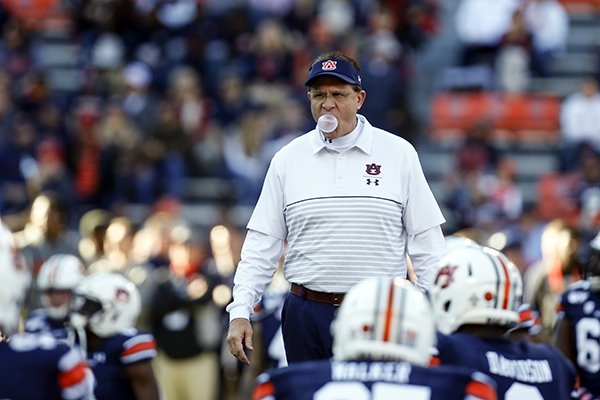 Auburn head coach Gus Malzahn blows a bubble as he walks around before an NCAA college football game against Georgia, Saturday, Nov. 16, 2019, in Auburn, Ala. (AP Photo/Butch Dill)

Auburn Coach Gus Malzahn, who grew up in Fort Smith and led Shiloh Christian and Springdale to state championships as a high school coach before going on to success at the college level, said he didn't expect to be part of the 2020 induction for the Arkansas Sports Hall of Fame.

"No, no way," Malzahn said Wednesday on the SEC coaches teleconference. "It's the state hall of fame. Growing up there and everything that goes with it, that's a special deal not only for me, but our entire family."

Malzahn also has worked at both of Arkansas' two FBS programs. He was offensive coordinator at the University of Arkansas in 2006 when the Razorbacks won the SEC West, and he was Arkansas State University's coach in 2012 when the Red Wolves won the Sun Belt Conference championship.

"It's a huge honor. I'm on cloud nine," Malzahn said. "It kind of caught me off guard. It was really neat to hear that. I'm excited to be part of this next class."

The induction banquet will be March 13 at the Statehouse Convention Center in Little Rock.

Malzahn -- who is known for giving short answers to reporters' questions -- jokingly was asked whether he'll be OK if he's not able to give a lengthy speech at the banquet.

"I talk to him every day," Saban said. "I talked to him Saturday night and Sunday night. I talked to him yesterday. He's in good spirits and he's doing well.

"I think all the indications from the surgery have been really positive from a medical standpoint, and I think he realizes the recovery program that he's going to have and the difficulty that he will have. I think he's got a really good understanding of what he's looking at.

"He's always been a great guy to overcome adversity and he's got a really positive attitude about it. We're encouraged by his positive energy. As I've said before, I call him to cheer him up and he usually cheers me up. That's just who he is."

Derek Mason -- who has a 26-46 record in six seasons as Vanderbilt's coach, including 2-8 this season -- will be back in 2020, Commodores Athletic Director Malcolm Turner announced this week.

"Look, this has been a disappointing year, without question," Turner told The Tennessean newspaper. "But we are going to focus on root causes.

"We have had 50 years of routine kick-the-can coaching changes without accompanying the fundamental underlying change. And out of respect for those who truly support Vanderbilt football and with the focus on building a successful and sustainable football program, this is a cycle that we really need to break."

Mason has led the Commodores to two of the program's 10 bowl appearances, including a 45-38 loss to Baylor in the Texas Bowl last season to finish 6-7. Vanderbilt also finished 6-7 in 2016 with a 41-17 Independence Bowl loss to North Carolina State.

James Franklin did the unthinkable in leading Vanderbilt to back-to-back 9-4 seasons in 2012 and 2013 before leaving for Penn State.

That was a tough act for Mason to follow when he came to Vanderbilt after being Stanford's defensive coordinator. His first two Vanderbilt teams were 3-9 and 4-8 before going to a bowl in Mason's third season.

The Commodores beat Missouri 21-14 this season when the Tigers were ranked No. 22 for Vanderbilt's only SEC victory this season. Mason is 10-37 in SEC games with a road trip to Tennessee in the season finale after the Commodores play East Tennessee State on Saturday.

"When you look at where we are, that's not where we want to be," Mason told The Tennesseean. "That standard is higher, and we understand that. We are going to continue and grind.

"But to hear publicly a statement go out [from Turner] about where I sit right now, it's a strong statement of support. I thank him."

Georgia Coach Kirby Smart got a little carried away when he was asked by a reporter what he told his players after the Bulldogs won 21-14 at Auburn on Saturday to clinch a third consecutive SEC East title.

When Smart met with the media again Monday for his weekly news conference, he opened by taking blame for a poor choice of words.

"I would like to apologize for something I said after the game Saturday night," Smart said. "That's not indicative of who I want to be or what I stand for, and you know you messed up when you get home to your wife and ... you won the game, but she's more upset at something you said.

"It was an emotional win, and I was very emotional. But I've got to do a better job than that."

Missouri officials have been waiting since the summer -- when they appealed a postseason ban before the NCAA Infractions Committee -- to hear whether the Tigers will be able to play in a bowl game.

With quarterback Kelly Bryant as a graduate transfer to lead an offense loaded with returning starters, the Tigers looked like a cinch to win at least eight games and maybe push for 10 victories with Arkansas and Ole Miss as their opponents from the SEC West.

But with two games left in the regular season, the Tigers (5-5) are still working to get to the six victories needed to become bowl eligible. They have lost four consecutive games -- including being the only SEC team to lose to Vanderbilt -- to fall to .500.

The losing streak has dropped Barry Odom's record in four seasons as Missouri's coach to 24-24.

"You got to fight for Coach Odom because he fights for us every day, especially on Saturdays," Missouri senior cornerback Richaud Floyd told the St. Louis Post-Dispatch. "f you don't fight for Coach Odom, you're a bad person to me, because he's straightforward. He's transparent. He's going to give you everything you got."

If the Tigers lose at home against surging Tennessee (5-5), they'll have to beat Arkansas (2-8) in Little Rock on the Friday after Thanksgiving to get a sixth victory.

An Auburn player had 13 receptions against Georgia for the seocnd year in a row.

Ryan Davis caught 13 passes for 72 yards at Georgia last season when the Bulldogs beat the Tigers 27-10. Seth Williams had 13 catches for 121 yards in Saturday's 21-14 loss to Georgia at Auburn.

Davis and Williams are tied for the second-most catches in a game by an Auburn player.

Willie Gosha holds the Tigers' record with 17 catches for 220 yards in 1995 when Arkansas beat Auburn 30-28 in Little Rock when Barry Lunney Jr. -- the Razorbacks' interim coach -- was their quarterback.

Tennessee Coach Jeremy Pruitt said on Wednesday's SEC coaches teleconference that he knows who will start at quarterback for the Vols when they play at Missouri on Saturday, but he declined to share that information.

It might be time for redshirt junior Jarrett Guarantano to get the job back after he started the first four games when the Vols struggled to a 1-3 start.

True freshman Brian Maurer started four of the next six games with redshirt freshman J.T. Shrout getting one start and senior receiver Jauan Jennings getting a start when Tennessee opened in the Wildcat formation.

Guarantano played off the bench in each of those six games he didn't start and has helped the Vols go 4-2 in that stretch. He played the second half of the Vols' most recent game when they won 17-13 at Kentucky. He completed 7 of 8 passes for 115 yards and 2 touchdowns, and rushed for 30 yards to help Tennessee rally from a 13-3 halftime deficit against the Wildcats.

• Najee Harris became the first Alabama player ever to score three touchdowns in the first quarter when he accomplished the feat in the Tide's 38-7 victory at Mississippi State last week. Harris ran 10 yards for a touchdown, had a 19-yard touchdown catch and added a 5-yard touchdown run in the game's first 15 minutes.

• Alabama is the SEC's most penalized team in terms of yards. The Tide have been penalized 73 times for 689 yards in 10 games for an average of 68.9 per game.

Georgia junior D'Andre Swift -- an appropriate last name for one of the SEC's top running backs -- has carried a Bulldogs offense that has struggled to make the passing game go.

The Bulldogs will rely heavily on Swift again when they play Saturday against Texas A&M in Sanford Stadium between the hedges.

Texas A&M, which joined the SEC in 2012, is playing a conference game against Georgia for the first time.

How messed up is that? Granted, the SEC has 14 teams in two divisions and scheduling is complicated, but it seems crazy the Aggies and Bulldogs had to wait eight years for a regular-season matchup.

Texas A&M will look to play spoiler as Saturday marks the first of two consecutive games for the Aggies against teams ranked among the top four in the College Football Playoff rankings.

After taking on the No. 4 Bulldogs, Texas A&M will finish the regular season against No. 1 LSU. Earlier this season, the Aggies lost 24-10 at No. 3 Clemson. At least Texas A&M didn't have to play No. 2 Ohio State on the road this season, but the Aggies played No. 5 Alabama and lost 47-28 at Kyle Field.

Samford at No. 15 Auburn

Arkansas at No. 1 LSU

2009 -- The last time Georgia played Texas A&M, when the Bulldogs beat the Aggies 44-20 in the Independence Bowl

"If I had to sum it up in one way, maybe complacency. Maybe a few guys figured we'd made it."

-- Missouri safety Khalil Oliver on the Tigers' 4-game losing streak after they started 5-1.

"That team wasn't significantly better than us in any way."