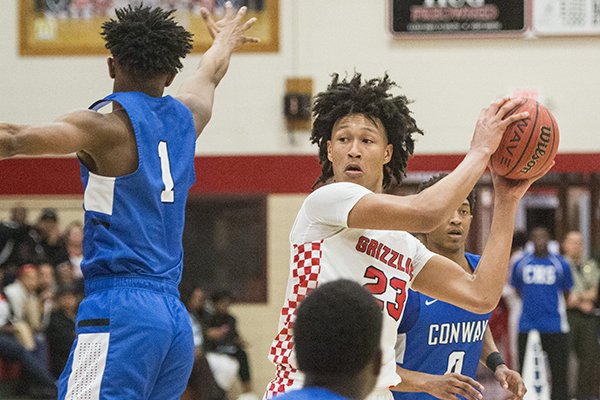 University of Arkansas Coach Eric Musselman has the Hogs off to an impressive 4-0 start this season, and recruits have taken notice.

The Razorbacks are third nationally in scoring defense (45.8 points) and in three-point field goal defense (11.6%) and are seventh in scoring margin with an average margin of 30 points a game.

Jacksonville point guard Davonte Davis, who signed his national letter of intent with Arkansas on Tuesday, is liking what he's seeing thus far.

"I've seen a lot of energy on the defensive end which leads to easy offense," Davis said. "Also playing tough throughout the entire game."

Davis, 6-4, 175 pounds, inked with the Razorbacks over scholarship offers from Texas Tech, Oregon, Ole Miss, Auburn, Florida and numerous others. He said the play of the Hogs lines up with what Musselman told him prior to the season.

"He told me that the game he loves is running up and down, and I've been seeing that," Davis said. "Also being tough and playing hard on the defensive end."

ESPN rates Davis a 4-star prospect, the No. 18 shooting guard and No. 80 overall prospect in the nation. He's excited about Musselman's style of play.

"I think running up and down is a strength in my game, so I think fits me and also the 5-out pick-and-roll game," Davis said.

Fort Smith Northside forward Jaylin Williams, who will announce his college decision between Arkansas or Auburn on Saturday, is impressed with team chemistry and the defensive intensity.

"I can tell that they are having a lot of fun on the court this year," Williams said. "Everyone looks like they are bonding well and they are playing good. You can tell defense is one of the main things coach makes them focus on."

Williams, 6-10, 235, has visited Arkansas four times since the hiring of Musselman with an official visit Nov. 9 being the latest. His lone visit to Auburn came recently when he made an official visit.

The Hogs tell the ESPN 4-star recruit that his skills are needed.

"They tell me all the time they don't have a player like me, so they can't show me players they want me to play like besides showing me players from Nevada," Williams said.

"They play with a lot of energy and really lock down on defense," Robinson said of the Hogs.

ESPN lists Robinson a 4-star recruit, No. 20 point guard and No. 90 overall prospect in the nation. He likes what Musselman has told him during the recruiting process.

"He said he really has great relationships with his point guard, meaning on the court he gives him the freedom to make plays and doesn't really hold him back," Robinson said.

Highly regarded shooting guard and Arkansas commitment Moses Moody has been vocal about his pride in the Hogs since his Nov. 9 pledge, and the Razorbacks' fast start has added to his enthusiasm.

"They have been locking up on defense holding team under 50 points and that's impressive," Moody said. "I've also noticed the fan support they have been getting. I know their second game they had 14,000 people. This is great to see and will help me recruit KK [Khalen Robinson] and Jaylin."

He's seen the Hogs display the style of play Musselman has told him since arriving in Fayetteville.

"I expected coach to bring a lot of energy and really install those positive vibes into the mentality of the players and I can see he has done just that," Moody said. "They are taking pride and having fun playing defense."

"I've seen a team that's playing together for a common goal," said Powell, who's an ESPN 4-star recruit. "A lot of these Power 5 schools will have a few egos on the court, but Coach Muss and staff have completely eliminated that. It shows best in the 4-0 start to the season. I see no reason for there not to be a deep tournament run this year."