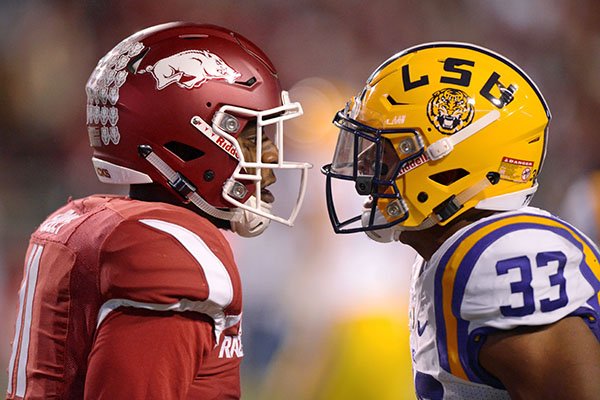 No wonder ESPN wants the SEC to upgrade its schedule.

It was a little surprising that Arkansas at LSU wasn’t picked for an afternoon prime-time kickoff. Instead, the Razorbacks get an experience of a lifetime: Death Valley after dark.

Expect the Razorbacks to be more energetic, even on defense, but there won’t be a miracle near the marsh.

Here are this week’s picks.

The Tigers are 43-46 point favorites, depending on which betting line you use. Once since 1980 has a team beaten that wide of a spread, and the chances are not good the Razorbacks will become the second. The Tigers average a SEC-high 47.8 points per game. The Razorbacks are averaging 22.3. Quarterback Joe Burrows is favored to win the Heisman Trophy, and the Hogs haven’t named a quarterback. The Hogs haven’t won a conference game in 755 days. LSU 62-14

This is a battle between two good football teams who are trying to improve their bowl picture. The winner should move up from Montgomery to Mobile. The Eagles may have an advantage on defense, but the Red Wolves can put up points in a hurry. They both had similar losses to Louisiana-Lafayette. Arkansas State 31-28

Here’s wishing Tua Tagovailoa a speedy and complete recovery from a painful hip surgery. Great kid playing a tough game. He won’t be missed on the field this week, though. However much the Tide are paying the Catamounts, who are 3-8, isn’t enough. Nick Saban will call off the dogs, but Bama’s third-teamers won’t be stopped either. Alabama 63-7

Maybe if Gus Malzahn can get his Tigers to win 102-0 he can get a little of the heat off. Probably not. The Bulldogs did beat Western Carolina 31-13 and East Tennessee State 24-17. These two teams have played 13 times, and the Tigers have won every time. Obviously, this is a tune-up time for the Gus Bus that needs to get past Alabama next week to truly get the heat off. Auburn 49-10

The Bulldogs have sewn up a spot in the SEC Championship Game, but a loss to the Aggies would knock them out of the College Football Playoff. The Bulldogs’ only loss of the season was at home to South Carolina. The Aggies have hit a stride and won four consecutive games but none between the hedges. Georgia 35-21

Finally, the Wildcats get bowl eligible. The Skyhawks had a signature loss to Florida earlier in the season, 45-0, so there’s not a lot of reason to believe there’s a shot at an upset. Kentucky 42-10

The Bulldogs can get within a win in the Egg Bowl of being bowl eligible. The Wildcats have lost two in row. Mississippi State 38-17

It appears the wheels have come off for the Tigers who have lost four consecutive. The Vols have won three straight. It might benefit the Razorbacks if the Tigers could find a way to win this since they would have enough victories to be bowl eligible when they come to The Rock next Friday. Of course, Missouri would still need to jump through some hoops with the NCAA to get its one-year bowl ban lifted. Tennessee 24-17

Was that the dreaded voice of confidence that Commodores’ Derek Mason got from his AD this week? Lose tomorrow and that support could disappear. Vanderbilt 31-17