Hogs used to playing No. 1 team 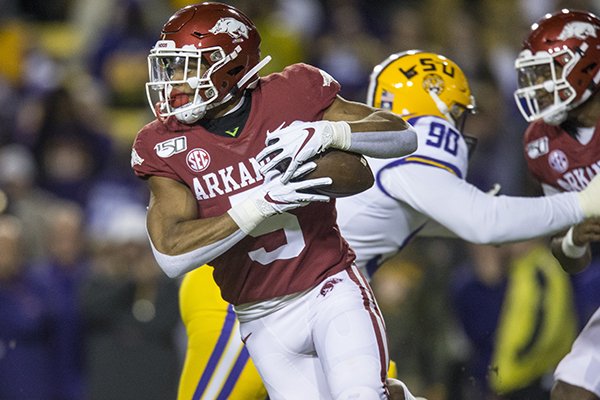 Arkansas running back Rakeem Boyd carries the ball during a game against LSU on Saturday, Nov. 23, 2019, in Baton Rouge, La.

BATON ROUGE -- Saturday night in Tiger Stadium marked the 26th time that the University of Arkansas had played a No. 1-ranked team, including twice in the past four games.

LSU's victory dropped Arkansas to 4-22 against No. 1 teams.

This is the first time Arkansas has played two No. 1 teams in the same season, but the Razorbacks are used to taking on top-ranked opponents. They have played a No. 1 team in nine of the past 10 seasons, and in 12 of 15 seasons since 2005.

The Razorbacks have lost 11 consecutive games to No. 1 teams, including seven to Alabama.

Arkansas' last victory over a No. 1 team was in 2007 when the Razorbacks beat LSU 50-48 in triple overtime at Tiger Stadium. That also was Houston Nutt's final game as Arkansas' head coach.

The Razorbacks' current losing streak to No. 1 teams started in 2009 when Florida beat Arkansas 23-20 in the Swamp.

Arkansas' first game against a No. 1 team was in 1957 when Texas A&M beat the Razorbacks 7-6 in Fayetteville.

Arkansas' Barry Lunney Jr. became the fifth interim coach in the Arkansas-LSU series since the Razorbacks joined the SEC in 1992.

Orgeron is the only one of the five who got the permanent job after his season as an interim coach. The former Arkansas graduate assistant strength coach (1986-87) is now 36-9 at LSU, including 11-0 this season.

Arkansas Athletic Director Hunter Yurachek and Chuck Barrett, the Razorbacks' radio play-by-play announcer, made it to the game with about 30 minutes to spare after encountering some travel issues.

Yurachek was in Terre Haute, Ind., to start the the day at the NCAA Cross Country Championships, where the Arkansas women claimed the national championship.

When Yurachek and Barrett -- who was in Fayetteville on Friday night to call the Arkansas-South Dakota basketball game -- arrived at the private jet terminal in Baton Rouge, they were informed that a fatal traffic accident had occurred on Interstate 110 between Baton Rouge Metropolitan Airport and Tiger Stadium, and that they might make it to the stadium by halftime.

When Dallas Cowboys owner Jerry Jones and his wife Gene landed in Baton Rouge, they suggested the car carrying Yurachek and Barrett and others could tag along with their escort to the stadium. The escort took back streets to arrive at Tiger Stadium in time for the opening kickoff.

The Razorbacks were down two defenders to open the game. Starting cornerback Montaric Brown and linebacker Deon Edwards did not travel with the team.

A team spokesman said both players had undisclosed illnesses.

Arkansas safety Kamren Curl forced and recovered a fumble by LSU receiver Ja'Marr Chase with 11:16 left in the third quarter for the Razorbacks' first takeaway in six games.

The Razorbacks hadn't forced a turnover since Sept. 28 when they lost to Texas A&M 31-27 in Arlington, Texas.

After the Texas A&M game, the Razorbacks didn't have a takeaway against Kentucky, Auburn, Alabama, Mississippi State or Western Kentucky.

LSU became the eighth Arkansas opponent in 11 games to score on its first possession.

Joe Burrow hit Ja'Marr Chase with a 37-yard touchdown pass with 12:54 left in the first quarter to cap a six-play, 75-yard drive that put the Tigers ahead 7-0.

Arkansas sophomore safety Joe Foucha was called for offsides for breaching the neutral zone on back-to-back plays on LSU's last drive of the second quarter to give the Tigers a first down at their 35.

Foucha came back into the game after one play.

John David White, a true freshman from Pulaski Academy, made his first career catch for the Razorbacks when Nick Starkel hit him for a 14-yard gain in the third quarter.

Shaq in the house

O'Neal, named one of the NBA's 50 greatest players and now a TV commentator, also made an appearance during the game's first half when he was introduced on the field and drew loud cheers from the crowd.

Arkansas has lost 15 consecutive games to nationally ranked teams after falling to LSU. The Razorbacks are 0-4 in such matchups this season, including losses to Texas A&M, Auburn and Alabama.

The Tigers extended their winning streak over the Razorbacks to four games with Saturday night's victory.

LSU's winning streak matches its third longest in the series, which began in 1901 when the Tigers won 15-0 in Baton Rouge.