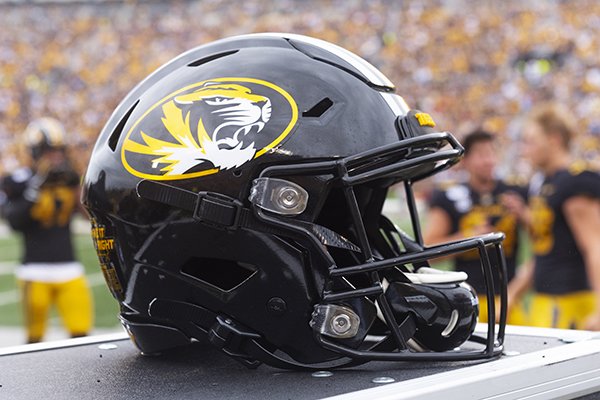 A Missouri football helmet sits on the bench during the third quarter of an NCAA college football game against South Carolina Saturday, Sept. 21, 2019, in Columbia, Mo. (AP Photo/L.G. Patterson)

FAYETTEVILLE — Arkansas’ game against Missouri on Friday will be the last this year for both teams.

The Tigers (5-6, 2-5 SEC) had their postseason ban upheld by the NCAA on Tuesday, nearly 10 months after Missouri appealed the verdict. That means that even if the Tigers, a 12-point favorite, defeat Arkansas at Little Rock’s War Memorial Stadium, they won’t be able to play in a bowl game.

Both teams enter the game on long losing streaks. Arkansas (2-9, 0-7) has lost eight straight games and Mizzou has lost five in a row.

"I hate the news for our program and for our seniors who have represented the University in a very positive way," Missouri coach Barry Odom said in a statement. "This decision negatively impacts their short experience in life as college student-athletes who had nothing to do with this situation. It's a tough lesson to be dealt, but they will learn from this and motivationally use it later in life when hardship comes along."

Missouri’s football, baseball and softball teams were given one-year postseason bans in January when the NCAA Committee on Infractions found that a former tutor completed academic work for 12 athletes. Other penalties included scholarship reductions and recruiting restrictions.

Missouri appealed the decision, saying its penalties were more harsh than similar cases that resulted in NCAA punishment. The ruling was upheld by the NCAA’s Infractions Appeals Committee.

"It is regrettable that so many innocent current Missouri student-athletes across three sports will miss postseason opportunities due to actions for which they were not responsible," Sankey wrote. "Our disappointment related to the application of a postseason ban and the Infractions Appeals Committee’s upholding of the decision after more than four months of deliberations is magnified by recent decisions in other cases with similar fact patterns."

Missouri chancellor Alexander Cartwright and athletics director Jim Sterk said they were "deeply disappointed and appalled" in a joint statement.

"Today's decision raises serious questions about whether the current NCAA enforcement system encourages or discourages cultures of compliance and integrity," they wrote.

With Missouri ineligible for the postseason, the SEC will not have more than nine teams eligible to play in bowl games this year. Eight teams are eligible entering the final week of the season, and Mississippi State can secure its sixth win with a victory over Ole Miss on Thursday.

Four teams - Arkansas, Ole Miss, Vanderbilt and South Carolina - have been eliminated from bowl contention with seven or more losses.

With so few teams eligible the SEC will not be able to send a team to all of the bowls with SEC tie-ins, and may have vacancies in multiple bowl games. The league could have as many as three teams play in New Year’s Six bowl games, which would have a trickle-down effect on less prestigious bowls.