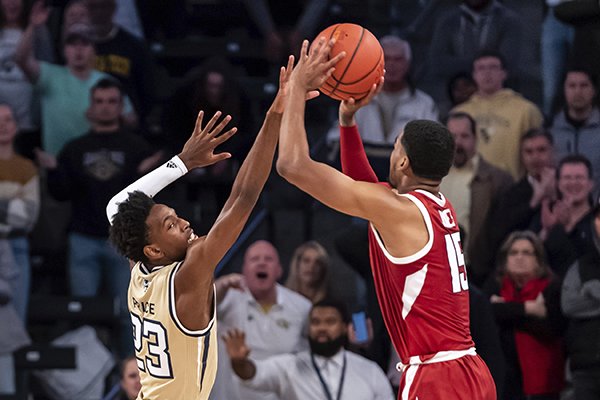 The University of Arkansas basketball team couldn’t score in overtime until Mason Jones banked in a three-point basket from 25 feet with one-tenth of a second left to lift the Razorbacks to a 62-61 victory over Georgia Tech on Monday night before an announced crowd of 6,547 at McCamish Pavilion in Atlanta.

The clock was running down when Jones caught a pass from Isaiah Joe — who was double-teamed — and got off a shot closely guarded by Georgia Tech defender Asanti Price.

“[Joe] passed me the ball, and I knew there was three seconds left and I had to do what I had to do,” Jones, a junior guard who led the Razorbacks with 24 points, said on Arkansas’ postgame radio show. “And God blessed me with a banked three-pointer.”

After Georgia Tech 6-10 senior center James Banks hit a short jumper in the lane for the first points for either team in overtime to give the Yellow Jackets a 61-59 lead with 21 seconds left, Arkansas Coach Eric Musselman chose not to call a timeout because he didn’t want to have to inbound the ball against a set defense.

“I wanted something out of the flow,” Musselman said on Arkansas’ postgame radio show. “Obviously, I didn’t call bank shot, but we had the right guy shoot it.”

“As we know, in basketball sometimes the ball bounces your way, and sometimes it doesn’t, and tonight it didn’t bounce our way at the end there,” Georgia Tech Coach Josh Pastner said in his postgame news conference. “We guarded it really well and the kid hit a prayer.

Arkansas (6-0) won its first road game under Musselman after winning five games at home by an average of 28.2 points. Musselman is the first Arkansas coach to win his first six games on the job since the 1942-43 season when the Razorbacks started 10-0 under Eugene Lambert.

Arkansas shot 38.6% from the field (22 of 57) and had missed 10 consecutive shots — including four in overtime — before Jones hit the game-winner.

“I thought we had some ill-advised shots down the stretch maybe by guys in spots that we didn’t want shooting the basketball in,” Musselman said. “But you want to give guys freedom.”

The Razorbacks had 14 turnovers, including two in overtime.

“We had some turnovers that were really, really costly against the zone that we’ll have to clean up,” Musselman said. “But just from a competitive nature, they did a great job.”

Joe, a sophomore guard, shot 4 of 14 but had 13 points, a career-high 9 rebounds and matched his career high with 5 steals.

Arkansas beat Georgia Tech for the first time in 58 years, since a 72-42 victory on Dec. 30, 1961, in the Poinsettia Classic in Greenville, S.C. Since then, Arkansas had lost five in a row against Georgia Tech, including 69-65 at Fayetteville last season.

“It was crazy,” Jones said of the postgame locker room scene. “We were all just celebrating, having fun, knowing that we wanted to come in here and get a ‘W’ on the road, and knowing we owed them from last year. It was just exciting to get a ‘W’ and start 6-0.”

The Razorbacks held Yellow Jackets sophomore guard Michael Devoe, who came into the game averaging 26.0 points to rank third nationally, to 12 points on 4-of-16 shooting.

Whitt, a senior graduate transfer guard from SMU who lost to Georgia Tech as an Arkansas freshman during the 2015-16 season, had 6 points, 4 rebounds and 2 assists while playing all 45 minutes.

Jones missed the front end of a one-and-one opportunity with 2:22 left in the first half to end his streak of consecutive made free throws at 36 going back to last season. Jones was 27 of 27 this season before his first miss. He was 7 of 10 on Monday night.

“The ball was kind of slick tonight, especially dealing with that Adidas ball,” Jones said. “It was kind of different. But I don’t want to put the blame on the ball.

“I’m a player, and I should be making free throws. It’s kind of on me for the game being that close.”

Georgia Tech starting point guard Jose Alvarado — who led the Yellow Jackets against Arkansas last season with 20 points and 9 rebounds while playing 40 minutes — didn’t dress out because of an ankle injury and was replaced in the lineup by Bubba Parham.

Parham scored 10 points, but he had 6 of Georgia Tech’s 23 turnovers.

“I think you’re putting a lot of stress on Bubba and Michael to handle it without Jose in there,” Pastner said.

Arkansas won at Georgia Tech for the first time in three visits after the Yellow Jackets beat the Razorbacks at home during the 1964-65 and 1965-66 seasons.

“My son flew all the way from San Diego and got in right before the game, so I’m glad he got to see a barnburner because that was unbelievable,” Musselman said. “We did just enough to win.”