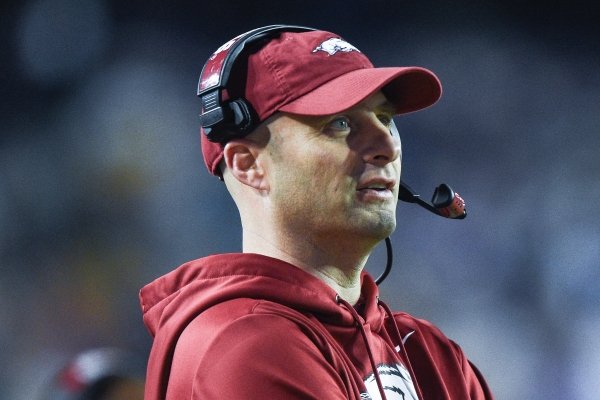 • It's Thanksgiving week, and we appreciate you guys covering this team and thankful for the media relationships I've been able to create over the years.

• Hayden Henry had shoulder surgery and will be out for the rest of the year. He had a significant injury there, and he had successful surgery and is on the mend. He will attack the recovery with toughness and grit. We'll miss him. I'm saddened for that.

• It's still day-to-day with the quarterbacks right now. Nick Starkel and KJ Jefferson both threw yesterday. We're still evaluating. I guess it would be appropriate for the position to be up in the air heading into Week 12. Again, very hour to hour with how this is proceeding.

• More on Henry: We're thin at linebacker. De'Jon Harris and Bumper Pool have played a lot of snaps. We're hoping to get Deon Edwards back this week. I expect Harris, Pool and Grant Morgan to take a bulk of the snaps there.

• Montaric Brown will likely be out this week. He did not travel to Baton Rouge last week with an illness. We’re holding out hope that he gets to the point where he’s ready to go with us.

• I've known Jack Lindsey's family and know him. When he's gotten chances in scrimmages, he's made plays. He's been a guy in a scrimmage here or there who makes a play and he's confident and aggressive. He's been coached by Zak Clark at Fayetteville and Springdale. Zak is a very good friend of mine.

• Hudson Henry has taken advantage of the four-game redshirt rule and is progressing. He made two catches and finally has positive yardage receiving. I joked with him and said I had more receiving yards than him after his first catch, which went for -2 yards. He's progressed nicely and has a very bright future ahead of him. He has all the physical traits. He wasn't ready early on, but he has shown some good signs of improvement over the last month.

• Austin Capps will be the offensive captain this week. He watched his first Razorbacks game in Razorback Stadium. I couldn't have come up with a better person to represent us this weekend than him.

• I think the quarterback situation stuff is just so over-saturated. Only we need to know what's going on behind closed doors in regards to that. We're going right into team stuff immediately, too. We're shortening practice up at this time of the year. We're jumping right into team and getting going with our gameplan. I just made the determination that you guys were going to get players later, but not watch practice.

• On Missouri: I'm more worried about our guys. We've laid out extensively what we have to play for, which is a lot. We have to put some more hay in the barn, but we'll get there. We have a lot to play for.

• I never caught a pass, but I would have caught it if they threw me one.

• I think I got concussed the first day Danny Ford showed up and we had to do open-field tackling. I didn't miss any extensive time ... well, actually, Mississippi State in 1993 I got knocked out of the game. Only time I ever missed a game. We tied the game 10-10 in War Memorial. I got knocked out in the second quarter.

• Missouri is a well-coached football team. They are well coached and have a veteran OC in Derek Dooley. They're sound in all three phases in their schemes. They take the identity of Barry Odom defensively.