Lashlee among semifinalists for Broyles Award 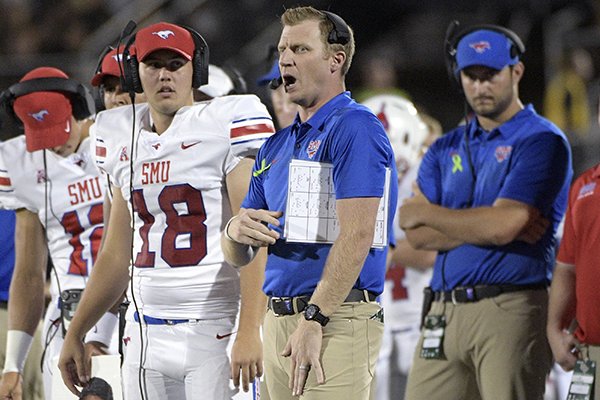 FAYETTEVILLE — SMU offensive coordinator Rhett Lashlee, a former walk-on quarterback at Arkansas, is one of 15 semifinalists for the Broyles Award, which is given annually to the nation's most outstanding college football assistant coach.

SMU's offense is averaging 506 yards and 43.5 points per game this season, which both rank in the top 10 nationally. The Mustangs (9-2) are scheduled to conclude their regular season with a game against Tulane on Saturday.

Lashlee was a finalist for the Broyles Award while offensive coordinator at Auburn in 2013.

Lashlee, a Springdale native who set state passing records in high school at Shiloh Christian, was a backup quarterback at Arkansas from 2002-04, and was a graduate assistant for the Razorbacks in 2006.

Scott, Steele, Brown and Leonhard were previously finalists for the award.

Five finalists will be announced next week and will be invited to the Broyles Award banquet on Dec. 10 in Little Rock.