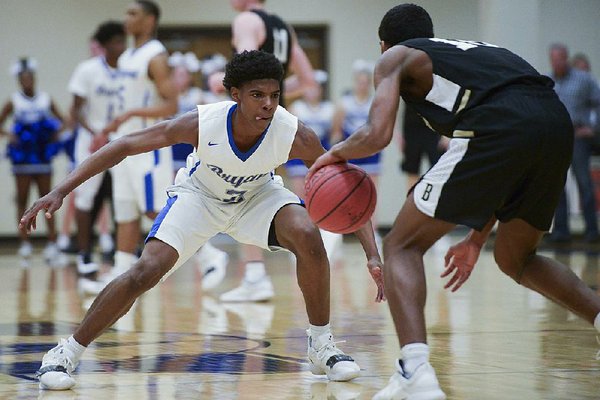 Arkansas coach Eric Musselman has another reason to be thankful on Thanksgiving Day after 4-star guard Khalen Robinson announced his commitment to the Razorbacks.

Robinson, 6-1, 170 pounds, of Oak Hill Academy in Virginia narrowed his list of schools to Arkansas and Kansas before choosing the Razorbacks. He also had scholarship offers from Illinois, Iowa State, TCU, Texas A&M, Vanderbilt and others.

Musselman’s player development and having former NBA point guard Earl Boykins on staff as the director of student-athlete development was a key factor in Robinson’s decision to commit to Arkansas.

“They have Earl Boykins and he’s a small guard and he was in the league for 10 to 12 years, then just the playing style they have,” said Robinson, who attended Bryant as a junior. “That’s why I committed to Arkansas.”

ESPN rates Robinson a 4-star recruit, the No. 20 point guard and No. 90 overall prospect in the nation.

Because other schools had offered scholarships to Robinson earlier, Musselman and the staff had to play catchup in developing a bond with him after arriving in Fayetteville in April and offering Robinson in June.

Robinson said Musselman showed him he was really wanted at Arkansas.

“Just the genuine love I was looking for that,” Robinson said. “That’s what made him catch up with all of the other schools that were recruiting me.”

Robinson was named to the Arkansas Democrat-Gazette first team All-Arkansas Preps team after averaging 18 points, 4.5 rebounds, 3 assists and 3 steals a game and leading the Hornets to the Class 6A state title game as a junior.

“We’ve been trying to play together the last couple of years, but if we didn't play with each other we would still support each other no matter what,” Robinson said. “It’s big we have that connection on and off the court.”

Robinson, who wanted to announce his college decision on his brother Kollin’s 12th birthday, said he and Moody have an unbreakable bond.

“If he’s down, I know how to lift him up and if I’m down he knows how to lift me up,” Robinson said. “That just comes from playing with each other when we were younger.”

The Razorback fan base has been very vocal in hoping Robinson would commit.

“The fan love from Arkansas is crazy,” he said. “I loved it.”

All four prospects are ESPN top 100 recruits. ESPN national recruiting director Paul Biancardi rated the Hogs' class No. 6 nationally prior to Robinson’s commitment and said the addition of Robinson might vault the class into the top five.

Robinson, Williams and Moody plan to sign with Arkansas during the spring signing period that begins April 15.