No time for that: Musselman not one to prolong game 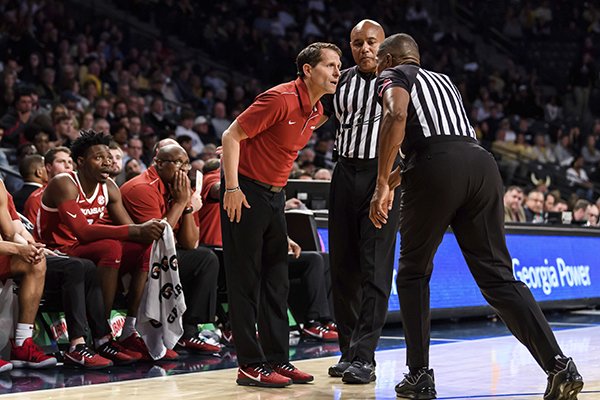 The Razorbacks finally called their first timeout of the season with 8:22 left in the second half of their 62-61 overtime victory at Georgia Tech on Monday night, but it was by guard Desi Sills, not Musselman.

Sills signaled for a timeout while he was trying to inbound the ball because he didn't want to be hit with a five-second call and cause a turnover.

"I'm really trying to see how many timeouts I can save in a lifespan," Musselman said. "I've got a lot of equity built up in timeouts saved that I'll be able to take with me when I'm done coaching."

[Video not showing up above? Click here to watch » https://www.youtube.com/watch?v=CdZ26hLkCYE]

There are eight media timeouts in a college game with four in each half. Each team also has four timeouts -- and can save as many as three for the second half -- with an additional timeout for an overtime period.

"The real truth is, when you're watching a game the worst thing you want is a million timeouts," said Musselman, a former NBA head coach and assistant coach whose mentors included Chuck Daly. "I mean, Chuck Daly used to hate timeouts.

"I do think there's a time and a place [to call timeout], but I think a lot of times they're overused. Having coached against Phil Jackson, I kind of always marveled at the fact that his teams figured things out.

"I see so many times where teams are out of timeouts, too. We're never going to be out of timeouts down the stretch. If you do need something, we'll always have some extra timeouts for sure."

[Video not showing up above? Click here to watch » https://www.youtube.com/watch?v=J8KbBt7kZWw]

Dean Salinas learned first-hand several years ago how serious Musselman is about not calling timeout.

Musselman was fired as the Sacramento Kings' head coach after the 2007-08 season, but he had three years left on his contract and decided to take a break from coaching to spend more time with his sons.

Michael Musselman, now on Arkansas' staff with his father, and Salinas' son, Jake, were among the players on a sixth-grade AAU team in Danville, Calif. -- about 30 miles east of San Francisco -- called NorCal Select.

Salinas, an operations manager for a construction company in Livermore, Calf., convinced Musselman to coach the team.

Salinas said Musselman agreed to coach if Salinas was his assistant and did everything else involved with the team, such as dealing with parents, getting uniforms and making sure tournament fees were paid.

"We had the best AAU team in the Bay Area," Salinas said. "Because every kid from San Francisco to Sacramento wanted to play for Eric Musselman.

"We were going through games and winning by 40 or 50 points. But we finally got a close game and one of our kids and a kid on the other team were on the court scrambling for a loose ball."

That's when Salinas decided to do some coaching.

"When our kid got the ball right in front of the bench, I jumped up and called timeout to make sure we kept possession," Salinas said. "Who wouldn't do that? Every coach on the planet would do that, right?"

"Eric basically forearmed me right in the chest and knocked me back into the chair -- like a hockey player knocking a guy into the boards," Salinas said laughing. "He said, 'Don't you ever call a timeout ever again in my games!'

"So I'm trying to learn as much as I can from Eric Musselman -- the NBA coach -- and I ask him, 'Is not calling a timeout part of your strategy of not letting the other team take a break so you can wear them out? Do you not want to stop our momentum? Or is because you don't want to let them set up a play?'

" 'What is your philosophy? Please enlighten me.' "

None of the above.

"Eric looked at me and he said, 'I want to make sure we have time to go get a burrito before we play the next game. We have to play again 30 minutes after this one ends,' " Salinas said. "I mean, he's one of the smartest coaches ever, and he's telling you he doesn't call timeouts because he's hungry and he wants to get something to eat."

Georgia Tech took a 61-59 lead over Arkansas on James Banks' basket with 21 seconds left in overtime, but Musselman still chose not to call a timeout.

With the clock was running down under five seconds, Razorbacks guard Mason Jones caught a pass from Isaiah Joe -- who was double-teamed -- and banked in a game-winning three-point basket with 0.1 second left.

"I want the guys to know that I trust them," Musselman said. "Hopefully, we've defined roles well enough for guys to know who we want shooting the ball at the end of a game.

"Obviously, we don't want to bank a shot from 35 feet. But having said that, there is a lot of times you watch a game and a team will struggle to inbound the ball or a pass will be deflected or the opposing team will have a timeout and they're able to make an adjustment and they might have played 10 straight possessions of man-to-man and then they go zone.

"We knew what defense we were going to see. In the flow of the game they weren't going to change it. They didn't have enough time to do anything."

In Arkansas' 77-56 victory over South Dakota, Musselman didn't call a timeout when the Coyotes cut a 19-point deficit to 10 with seven minutes to play. The Razorbacks finished the game on a 15-4 run.

Georgia Tech tied the game late in the second half after trailing by seven points, but again Musselman let the Razorbacks keep playing.

"I love it because he just lets us play through the little momentum runs that the other teams have," Jones said. "Just the fact that he trusts us his first year here is amazing."

"I think it's a great way to play," Horn said. "At the end of the day, what we're trying to do as coaches is to get our guys to play well between the lines when the lights are on, so I think what Eric has done with his team so far is awesome."

Musselman said that in leading Nevada to a 110-34 record the previous four seasons -- including NCAA Tournament appearances from 2017-19 -- he rarely called timeouts. His comfort level with that philosophy has carried over to his brief time at Arkansas.

"I feel like we've practiced a lot of situations for the last six, seven months," Musselman said. "It's up to our staff to make the right play call. I feel like we have some quick-hitters that are a little bit different. Options that we don't utilize during the flow of the game.

"I don't really want to bring out the play calls of what those are, but we do have specific plays that we don't run over and over and over to get a guy to good look. And I don't feel we have to call a timeout to do that."