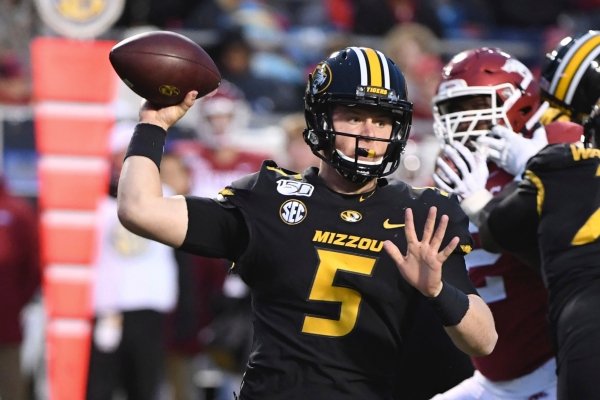 Missouri quarterback Taylor Powell drops back to pass against Arkansas during the second half of an NCAA college football game Friday, Nov. 29, 2019, in Little Rock, Ark. (AP Photo/Michael Woods)

LITTLE ROCK — A trio of Fayetteville players returned to the site where they won two state titles and put Arkansas' season to bed before 33,961 fans at War Memorial Stadium.

Powell, 8-of-14 passing for 105 yards with a touchdown and an interception, put the game away with a 10-yard pass to former Razorbacks wideout Jonathan Nance, who had three catches for 38 yards on the day.

Missouri head coach Barry Odom, who also has a couple of other Arkansas products on his roster in former Bentonville player Joe Britton and Little Rock Parkview’s Markell Utsey, was pleased with their efforts.

“I know what it is like to go back and play your home school,” noted Odom, a former Missouri player who was a defensive coordinator at Memphis when that team came to play the Tigers. “I am proud of the effort, I am proud of the focus. It is not easy to handle those things some of the time. I think they all played really well.

“For Nance to make the touchdown catch, the way they he did with Taylor Powell delivering it. Barrett Banister had so many plays. Britton played great on special teams and then the defensive linemen, Byers and Utsey, I saw them flash a number of times, which is awesome.”

It was the ninth loss in a row for Arkansas, which finishes a second straight season 2-10 season and lost its 19th straight SEC game.

Powell was happy to take home a trophy courtesy of a win in what is called Battle Line Rivalry over the team he loved growing up.

“Sympathy or empathy, I am not sure of because it is a rivalry game,” Powell said of how he views the Razorbacks’ current struggles. “But those will always be my boys. If you are from Fayetteville or you are from Arkansas, I have a lot of respect for you. I probably knew 90 people on the field today and that team. I know a lot of the coaches, too.”

That includes Arkansas interim head coach Barry Lunney, who replaced the fired Chad Morris two games before the end of the season.

“And props to Coach Lunney,” Powell said. “He and I go way back and he was great to me through the recruiting process and he has always been nice to my family so I am really thankful for him, too.”

The game turned into a quarterback battle between former Fayetteville High quarterbacks Powell and Arkansas starter Jack Lindsey, who finished his high school career at Springdale and threw two touchdown passes in his Razorback starting debut.

Lindsey ended the day 10-of-26 passing for 75 yards and put Arkansas up 7-0 with a 19-yard pass to Trey Knox in the first quarter and 14-10 early in the third quarter on a 10-yard scoring toss to Grayson Gunter.

“A bunch of people were asking me, ‘Wdho is this 18?’ I told them it is me and Barrett’s best friend," Powell said. "Probably in about two or three weeks we will go and get some golf rounds in and be back home with him. That will be good.”

Missouri (6-6, 3-5) had lost five games in a row before winning its regular season finale, one that came a few days after its appeal on a NCAA bowl ban had been denied.

“We sure needed it,” Odom said. “I am happy to get win number six, wish we had the opportunity to go play in a bowl game somewhere, but they can’t take those six from this team and we will continue to work. We will take a little break with our guys and there are a lot of guys in that locker room that will be back next year. We will start building the next football team in short time.”

Powell echoed the sentiment of how big a win it was.

“It has been tough the last five or six weeks,” Powell said. “It is good momentum for us going into the off-season. Our guys are really high right now and we are really happy. We haven’t had that in awhile. I’m really excited for the seniors, too.”

The win was especially pleasing for Banister, who had four first-down catches one Missouri drive and was not offered a preferred walk-on spot at Arkansas as he was at Missouri.

“It meant a lot to me,” Banister said. “It was a lot of fun. It is something that I will remember for the rest of my life. This game is marked on my calendar every year. I enjoyed it. It was fun.”

Powell also admitted that winning at a place he, Banister and Byers won two state titles in three attempts, was special.

“It was cool,” Powell said. “This a great place. I love War Memorial, lot of good memories here.”

Powell and Banister hooked up on several passes, just as they did at Fayetteville.

“I don’t have many words to describe him because he is my best friend, he is like my favorite target,” Powell said. “He played his balls off and I am thankful for him.”

It was a game where Arkansas had over 10 players out due to injuries and an outbreak of the mumps while Missouri was also banged up.

“I am so proud of our team, especially our seniors and then all the guys who stepped up today because there were so many injuries that went into the day,” Odom said. “It was a short week, we were banged up going into the game, first and foremost. You just have to prepare and get the next guy ready.

“…When we needed it, we were able to go run the ball and then defensively we give up 240 yards (total offense) and that’s a pretty good day at the office.”

Banister is aware it was not a pretty win for his team, but it was a satisfying one to go into the off-season on.

“The last couple of weeks we have been hearing how we are not very good, how we are not doing this, not doing that. We have had some injuries, guys go out there and go down and we had other guys step up and make plays. We didn’t play perfect, we were the best group in the world today, but we went out and made plays when we needed to so I was proud of how everybody stepped up, prepared for that and it was a good jump start into this off-season.”

Odom’s job security has been a hot topic in Missouri and he was asked after the game if he had any idea of whether he would be retained as the Tigers' coach.