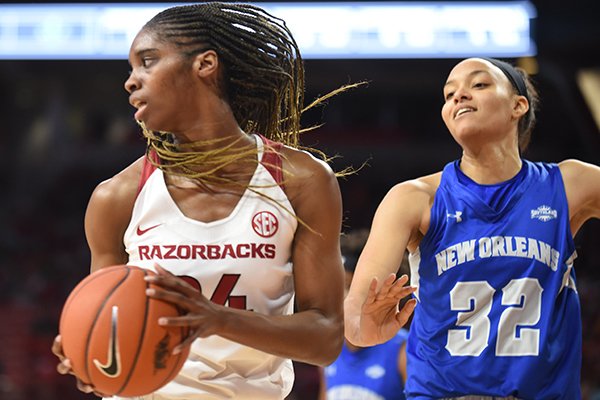 Arkansas forward Taylah Thomas (24) pulls down a rebound during a game against New Orleans on Friday, Nov. 8, 2019, in Fayetteville. Thomas recorded a career-high 21 rebounds, one shy of the school record for a single game.

FAYETTEVILLE — Arkansas women’s basketball coach Mike Neighbors raved in the preseason about Taylah Thomas’ fitness level and the 6-foot-1 junior showed she’s raised her level of play, too, to begin this season.

Thomas came within a rebound of a single-game school record in the season opener, grabbing 21 boards in the win over New Orleans. She also set a career-high, scoring 16 points in the Razorbacks’ 84-80 loss at California on Sunday.

There’s no question Thomas has been a key component in the Razorbacks’ 5-1 start which has them ranked No. 25 nationally by The Associated Press and No. 24 in the USA Today Coaches’ Poll. Thomas is averaging a team-best 10.8 rebounds per game and also showed off a better offensive game.

She showed off her quickness beating Cal’s bigger players down the floor in transition for layups multiple times in the first half.

“Taylah was phenomenal,” said Neighbors talking about the Cal game. “She had a season’s worth of highlight video on how to run the floor as a rim-runner in one half of one game. I think you’ll see her confidence continue to soar.”

She’s been forced to shoulder the bulk of the work around the basket since injuries sidelined 6-1 Kiara Williams, last year’s leading rebounder, along with 6-3 freshman Destinee Oberg and 6-3 junior Macy Weaver. Not bad for a player who Anderson found thanks to former Arkansas women’s assistant coach Kit Kyle Martin not long after he took the job in Fayetteville in April 2017.

“I never saw her play live, not one time,” Neighbors said. “Film and took Kit Kyle’s word. There’s not a lot of people I’d do that with but she was one of them. “She said ‘this kid’s got it.’ Then we got her on the phone and she was just a delight to talk to from the get-go.”

It’s sure paid off for the Razorbacks as Thomas has played in every game since she stepped on campus. That’s a string of 74 consecutive games played.

Neighbors said she was kind of forced to play as a freshman, but Thomas wasn’t fazed. “Nothing really challenged me like, ‘Oooh, this is too hard,’” Thomas said. “I just had to keep leveling up. We played really fast in high school so that wasn’t a really big adjustment.”

She worked harder in the offseason to return in better physical condition this year and it’s worked out well for her and the Razorbacks with all the injuries.

Neighbors took special notice in August when the post player posted the top score of all players on what’s called a beep test, which measures fitness. “It’s really rare for a non-point guard to win it,” Neighbors said. “Ninety-nine percent of the time a point guard will win it. That was our indicator there.”

Thomas hasn’t felt any added pressure with the shorter post rotation either. “He told me you can’t get in foul trouble,” Thomas said. “You don’t really have backups with size. As a junior now I can take that in and say, ‘OK, I got you.’ Maybe if I was a little more immature I would be like, ‘I gotta do this, I gotta do that.’ But now it’s just, ‘I got you.’”

Neighbors said Thomas has made a big jump that often happens with players going from their sophomore to junior years. “She’s been the perfect example of one who found the right fit and learned your role,” Neighbors said. “Then accept your role and then blossom in your role. If she does what she’s capable, she’ll be one of the top 10 rebounders in the history of our program.

“When she got 21, that’s among the elite of the elite on the glass in our program.”

Neighbors acknowledged he will move her to the perimeter some as well.

“She’s going to make a three sometime soon,” Neighbors said. “Once she makes one, she’ll get comfortable. She makes them in practice.”

Thomas said that could come when some of her teammates get healthy.

“They haven’t got to see what I can do yet,” Thomas said. “Everybody thinks I’ve improved, but they haven’t really seen anything yet. When we get our bigs back, maybe they can see that.”

NOTABLE Finished with a career-high 16 points in the loss at Cal earlier this week. … Was just one rebound from tying the single-game school record when she grabbed 21 in 28 minutes in the season-opener against New Orleans. … Leads the Razorbacks in rebounding, averaging 10.8 per game. … Has played in 74 consecutive games at Arkansas, never missing a game in her Razorback career.

Paul Boyd can be reached at pboyd@nwadg.com or on Twitter @ NWAPaulb.