State of the Hogs: QB play the difference 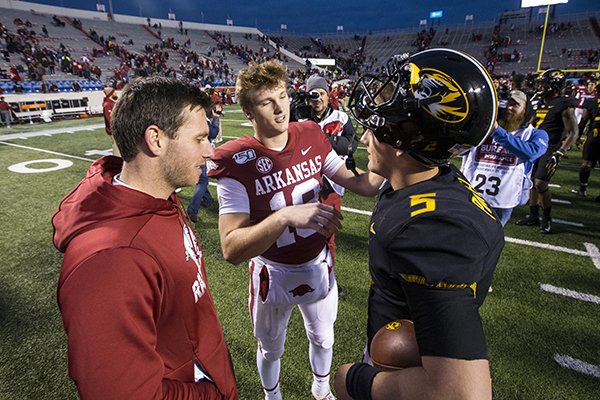 LITTLE ROCK — Trivia Question: Who was the last Arkansas quarterback to earn a victory as a starting quarterback in the SEC?

The ninth different quarterback of the last three seasons gave it a valiant effort against Missouri on Saturday at War Memorial Stadium. But, Jack Lindsey met the same fate as so many others the last two seasons. The junior from Springdale High School did not finish the game.

Lindsey threw two touchdown passes to give the Hogs a 14-10 lead 86 seconds into the second half, but Taylor Powell rallied the Tigers to a 24-14 football victory. It was the 19th straight SEC loss for the Hogs.

And, yes, it was Cole Kelley who last started a winning SEC game for the Hogs. It was Oct. 28, 2017 - a 38-37 victory over Ole Miss in Oxford, Miss. He was playing while Austin Allen recovered from a shoulder injury.

Allen took over for the final three SEC games that season, the beginning of the conference losing streak that’s the longest in school history. Lindsey got the nod against the Tigers after last KJ Jefferson, last week’s starter at LSU, was ruled out while in concussion protocol.

No one confirmed it, but that’s probably the status that Lindsey was in when he left the stadium. He took a blow to the head – that somehow wasn’t ruled targeting – with 6:43 to play.

The Missouri defensive back, after someone knocked Lindsey off balance, made a helmet to helmet hit to Lindsey that eventually caused UA interim head coach Barry Lunney to call timeout to substitute Ben Hicks at quarterback.

You probably recall that it was Hicks who opened the season as the starting quarterback. That was the first of five different starting quarterbacks this season. Nick Starkel and Jefferson all starts in SEC games, and John Stephen Jones started against Western Kentucky.

If you go back to the previous two years, Ty Storey, Kelley and Allen got SEC starts in the losing streak. Connor Noland’s only start last year was in a nonconference game against Tulsa.

Lunney didn’t have to be told all of that to sum up what’s happened with the Arkansas quarterbacks over the last three seasons. He is the lone coach who worked for head coaches Bret Bielema and Chad Morris. Someone did tell him there had been five different starters this year, anyway.

Lunney called it a “good point” and added, “It’s not how you draw it up. We’ve tried to look for answers (at quarterback) and there have not been clear cut answers.”

It’s called a lack of stability at the game’s most important position.

And, it’s a big reason the Hogs will have their third head coach in three years, not counting Lunney.

Lunney’s efforts should count for something. He made few mistakes in his two games at the helm. Turnovers have been the killer over the last two-plus seasons. The Hogs did not have one under Lunney.

That’s saying something considering Jefferson and Lindsey had worked primarily with the scout team most of this season. Lindsey battled a stout Missouri defense like a true Razorback.

The Tigers entered ranked 17th in the nation in total defense, allowing just 318 yards per game. They will improve that mark after holding the Hogs to 242.

Lindsey completed just 10 of 26 passes for 75 yards. He was just 1 of 9 in the first half, but that one gave the Hogs a 7-0 lead on a 19-yarder to Trey Knox. His first throw of the second half produced a 10-yard TD pass to tight end Grayson Gunter.

The Tigers chased Lindsey, but never sacked him. He rambled for 50 yards on four carries.

Missouri was scrambling at quarterback, too. Kelly Bryant did not play because of injuries (hamstring, knee). Connor Bazelak got the start, but gave way to Fayetteville product Taylor Powell in the second quarter.

Powell’s interception to open the second quarter helped the Hogs jump in front, but Powell settled in to lead touchdown drives of 84 and 64 yards, putting the game away with a 10-yard pass to former Razorback wide receiver Jonathan Nance with 8:47 left.

Powell completed 8 of 14 for 105 yards. Wide receiver Barrett Bannister, another Fayetteville product, led the Tigers with six catches for 60 yards. He caught passes for four first downs in the first Mizzou scoring drive.

Akial Byers (Fayetteville) and Markiel Utsey (Little Rock Parkview) made tackles in reserve roles on the Mizzou defensive line. Lunney was asked about preventing good players from leaving the state.

“It’s very critical,” he said. “If you get away it’s because they want to get away. It can’t be because we don’t evaluate properly.”

Obviously, those decisions fell on Bielema, the head coach when those four were coming out of high school. All four flashed SEC talent then and clearly should have been recruited by the Hogs.

Who will be the next head coach came up in the interview room, but not before players credited Lunney for restoring their spirit as the interim boss.

“Tonight we came out and fought for Coach Lunney,” said linebacker Bumper Pool, the team leader with 13 tackles.

“You never accept losing, but these last two games we got back to our roots, what being a Razorback is about.”

Pool said Lunney spoke from the heart to the team over and over about Razorback pride, including the origins of the name.

“He told us we were the Cardinals until the coach told reporters that his team had fought like a wild band of Razorbacks,” Pool said. “So he gave us the history lesson. It gave me chills thinking about it. Coach Lunney is a true Razorback. I’m so proud of Coach.”

Lunney had said the same thing about his players just a few minutes earlier.

“I’m very proud of the way they played,” he said. “We didn’t play well enough to win. But for two weeks, they gave me everything.”

Just seconds later, Lunney turned to the quarterback situation and the beating they took on a weekly basis. Concussions have become the new normal.

“At the end of the day, that’s a reflection of not a great football team,” he said. “Usually, the quarterback suffers. Obviously, they contributed to that, but (playing so many different QBs) is a microcosm of our season.”

Lunney said while Jefferson was ruled out of the game, he was clear to play Starkel, Jones or Hicks.

“Jack flashed at the end of last week’s game,” he said. “So we went with him.

“He scrapped around and did the best he could. He fought and hung in there. He probably will watch the film and see some things he’d want to do over.

“There were some balls that we could have caught, but Missouri’s defensive backs made plays on some of them.

“When you go back and look, the difference in the game, they made some plays with their wide receivers on a couple of passes at the end of the game. They just made more plays than we did.”

Lunney challenged the team to hang tough while the search for the head coach rolls along. It could take a couple of more weeks. His job is to continue to lead.

“I have tried to protect the integrity of the program,” he said. “I’ve told our players it’s grown man time. Men do what they got to do; boys do what they want to do. They have to take care of their responsibilities.”

Knox, just a true freshman, sounded like a grown man.

“That (19) hurts a little bit,” he said. “But at the end of the day, it’s something that we will carry with us. It will give weight to our workouts. We are going to get a new coach and I’m going to play for him.”

Then, there was a little smile, and a hope, “I want somebody who is going to throw it.”

That was a reference to style of play. To do that, the new coach make these trivia questions about quarterbacks a thing of the past.