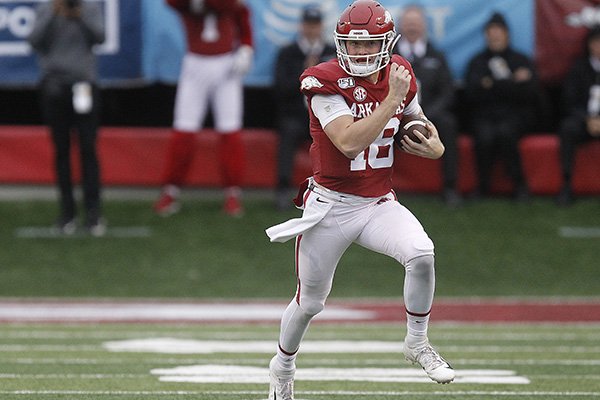 Arkansas quarterback Jack Lindsey (18) runs the ball during the second quarter of the Razorbacks' 24-14 loss to Missouri on Friday, Nov. 29, 2019, at War Memorial Stadium in Little Rock.

For the fifth consecutive game, the University of Arkansas started a different quarterback.

Redshirt junior Jack Lindsey made his first career start, but Missouri beat Arkansas 24-14 on Friday at War Memorial Stadium in Little Rock to hand the Razorbacks their ninth consecutive loss.

True freshman quarterback KJ Jefferson -- who suffered a concussion last week at LSU when he made his first career start -- didn't dress out Friday, so Arkansas interim Coach Barry Lunney Jr. gave Lindsey a shot rather than go back to senior Ben Hicks, junior Nick Starkel or redshirt freshman John Stephen Jones, who had combined to start the first 10 games.

"I think it's just been a strange year in that regard," Lunney, who made 40 starts at quarterback at Arkansas from 1992-95, said of the revolving door at the position this season. "It's not how you draw it up. I think what you probably see is us trying to look for answers. Just mix it up, change it up.

"There's just never been a clear-cut answer in that regard, and it's been a little bit of a challenge. Stability, just in general, is what's needed right now, especially in that position."

Lindsey, the Razorbacks' holder the past two years, got snaps at quarterback last week against LSU for the first time in a game since he was a senior at Springdale High School. He led Arkansas to two touchdowns in Baton Rouge while completing 3 of 4 passes for 51 yards and having a 30-yard run.

"KJ's out, concussion. Nick, early in the week he was being evaluated for it, too," Lunney said. "I felt like it was important to get somebody some reps and be stable.

"[Lindsey] had flashed in the last part of the [LSU] game. You always have to be careful about making assessments like that off of cleanup time. But Jack had been steady.

"Honestly, we'd had other guys who had opportunities as well. I think really at the end of the day, that's a reflection on that fact we're not a great football team right now."

Lindsey completed 10 of 26 passes for 75 yards and 2 touchdowns, and rushed 4 times for 50 yards on Friday.

"I think Jack played well given the short week and a day less to prepare," said freshman receiver Trey Knox, who caught a 19-yard touchdown from Lindsey to give Arkansas a 7-0 lead in the first quarter. "I thought he came out there and made big plays.

"He threw the ball nicely down the field. He played his tail off."

Lindsey's passing numbers could have been better, but there were some drops and plays on contested balls that went in the favor of Missouri's defensive backs rather than Arkansas' receivers.

"Yeah, I think he probably did," Lunney said when asked whether Lindsey played better than his numbers reflect. "I think he scrapped around and did the best that he could possibly do under the circumstances.

"I thought he fought and hung in there, and I'm sure there will be some things that he would like to do over when watching the film, but that's the same thing for everybody that plays the position, no matter if you're playing on Fridays, Saturdays or Sundays."

Lindsey was hit on several plays, and Missouri twice was penalized for roughing the passer.

"Jack was really tough today," said running back Rakeem Boyd, who led the Razorbacks with 95 rushing yards on 21 carries. "I thought the shot he took when he was going to the ground [in the fourth quarter] was possibly targeting. He's a tough guy. He got right back up after and ran another play."

"It's not something you see every day, five starting quarterbacks," Knox said. "But we had to play, it's football, you have to do what happens.

"Adversity is going to hit. We've just got to find the right guy."