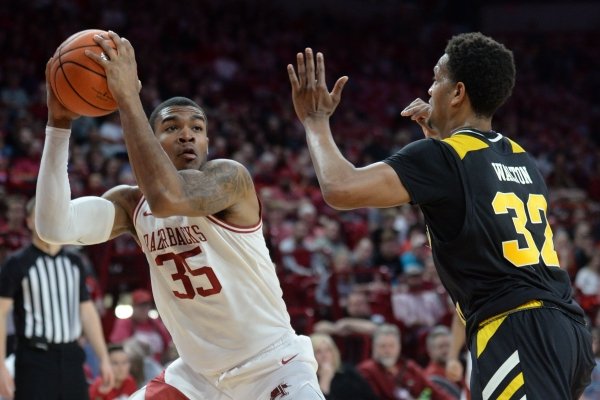 Cylla's stay on the floor was short lived, however. The grad transfer from North Carolina-Wilmington started both halves of Arkansas' 66-60 win over Northern Kentucky but played only five minutes. He did not record a stat against the Norse, and Saturday marked the seventh time - second time in as many games - in his career he did not score.

That gave way to the first bit of extended playing time of the season for sophomore forward Reggie Chaney, who began the year on indefinite suspension and missed the team's first three games against Rice, North Texas and Montana.

He played a season-high 25 minutes and stuffed the stat sheet, finishing with six points and career highs in rebounds (11) and assists (5) prior to fouling out with two minutes, 27 seconds to play.

Four games into his second season at Arkansas, Chaney is getting his feet back under him, Musselman said. And considering Arkansas has faced a zone defense for almost the entirety of its last two games, he added that he probably hasn't given Chaney enough credit for his interior passing.

Turnovers were an issue for Chaney at times as a freshman (24.7 percent turnover rate, per KenPom), but he has appeared more under control so far this season. He has handed out seven assists against just two turnovers.

One of the highlights of Chaney's night, too, was an assist in which he battled for a rebound, fell to the floor, regained possession while lying on his back and found Jimmy Whitt for a layup at the rim. The score pushed Arkansas' lead to 47-40 after Northern Kentucky cut its deficit to just two points roughly three minutes prior.

"His rebounding tonight is what we need from him," Musselman said. "And something that’s probably not going to get talked enough about is when you have a guy come off the bench like Reggie and he has five assists. I thought he did a great job of interior passing."

Saturday's game was a continuation of Desi Sills' struggles beyond the 3-point line. After an 0 of 5 night beyond the arc, the sophomore is now 2 of 30 on the season.

But what we also saw from Sills against Northern Kentucky was continued aggressiveness attacking the rim. Sills finished with 17 points - one off his career high set in the 2018-19 season finale at Indiana in the NIT - on 7 of 15 from the floor.

All seven of his scores came at the rim, and the seven buckets set a career-high for 2-point makes in a game. He had scored four times inside the arc in four games in his career prior to Saturday (three times this season), but he blew past those marks against the Norse.

“I think he is a kid that is really aggressive and plays with the kind of personality and approach that I'm sure Eric wants in his team and his players,” Northern Kentucky coach Darrin Horn said. “We were pleased in the way we guarded because (Isaiah) Joe was the only real threat from 3 and he was 2-of-9 shooting.

“But I think they hurt us a few times getting in the paint and getting some easy ones against our defense.”

Musselman noted that he probably could have done without a couple of Sills' dribble drives that led to turnovers, but he has been pleased with the rate at which Sills has finished when attacking opposing forwards.

"Probably the most important thing is he’s actually seeking contact inside that charge circle," he added. "He’s getting into bodies of shot blockers. He did that a lot against Georgia Tech. Tonight, I thought he did a great job of getting and-1s going to the rim.

"He’s getting 3-point plays, but they aren’t behind the arc. They're the old-school way."

In regards to his jumper, Sills said shots will begin to fall soon and he has not lost confidence in his touch. Whitt, who scored a team-high 24 points and grabbed nine rebounds, approves of Sills not settling for 3s.

"He’s done other things. He’s been able to find other ways to score," he added. "That was prevalent tonight in how he went out there and played. We were a man down — a scorer down — and he came in and put those points on the board for us.

"That’s huge, especially once he adds that and the shooting capability that we know he has, the sky’s the limit for him."

Walking away from that game, Horn, then an assistant under Shaka Smart, knew Joe was an elite shooter after he knocked down 5 of 8 attempts from 3-point range and scored 17 points in his college debut. The Norse's plan was to limit Joe's open looks on Saturday.

Joe, who made a program record 113 3-pointers in his freshman year, got some good looks from distance against Northern Kentucky but struggled to find his touch for the third consecutive game. He finished with 10 points on 2 of 11 shooting and 2 of 10 from deep.

Over his last three games, Joe is 6 of 26 from distance. The six 3s are the second fewest Joe has made in any three-game stretch in his 41-game career.

“Nothing special other than wanting to know where he was all the time,” Horn said of what the Norse did to slow Joe. “One of the 3s he got, we just totally blew it and left him. He shot it from maybe over in Rogers and still you can’t let him do that.

“I think he is the best shooter that we have seen and will see all year."

Whitt and Sills expect Joe to get going again from 3-point range sooner than later. Whitt reminded reporters what happened the last time the sophomore struggled with his shot - he broke out and poured in 29 points in one half.

"I'm pretty sure everybody knows he can shoot and knock down shots," he said. "Everybody knows at some point he's going to knock them down again, so it's nothing we worry about."

For the first time this season, the Razorbacks failed to lock up the perimeter defensively, and it nearly cost them.

Northern Kentucky, which came into the game taking 48.5 percent of its shots from 3-point range, knocked down 8 of 24 attempts. The eight 3s are by far the most Arkansas has allowed in a game. Rice, North Texas, Montana and Texas Southern combined for just eight triples in the first four games of the season.

A ninth 3 from the Norse may have handed the Razorbacks their first loss. Down 62-60 with less than 20 seconds to play, Northern Kentucky's Adham Eleeda missed a wide-open 3 in the corner opposite the team's bench that would have given the visitors the lead.

But the shot rimmed out, Adrio Bailey grabbed his third and final rebound of the game then sealed the win at the free throw line with 11 seconds to go.

Following the game, Musselman said Bailey over-helped defensively and left Eleeda, 5 of 25 from 3 entering the game, uncovered for the potential game winner.

"Obviously, the instructions were, ‘Don’t leave your feet on a 3 and guard the 3-point line,'" Musselman said. "But, with a team that drives and kicks, sometimes guys just naturally react to go help, and Adrio went to help. That’s a player that, like, 92 percent of his shots are from three. He was certainly not anybody we wanted to leave.

"Again, having said that, we came out with a win."

• Mason Jones missed his first game as a Razorback due to a shoulder injury. Musselman noted following the game he does not know when or how the injury occurred, but team trainer Mark O'Neal notified him of Jones' status on Friday.

Arkansas certainly missed its leading scorer and would have loved to have another 3-point shooter and ballhandler capable of breaking down the defense on the floor facing a 2-3 zone for the second straight game.

When asked about Jones postgame, Musselman said he is out indefinitely. The Razorbacks will prepare as if Jones will miss Tuesday's game against Austin Peay. It is probably best to sit him one more game to ensure he is healthy and rested for Arkansas' trip to Western Kentucky on Dec. 7.

• Dantez Walton, in Horn's mind, was the best player in Bud Walton Arena on Saturday. It is hard to argue that.

Walton, the Norse's leading scorer, finished with a game-high 30 points and 10 rebounds in the loss. He got his points efficiently, too, hitting 10 of 14 shots and 4 of 6 3-point attempts. Horn added that he didn't think Arkansas had a player on its roster who could guard Walton.

"They play so few guys that it seems that they are a little less aggressive once they get in the scoring area because they don’t want to foul,” Horn said. “We were just telling him to be aggressive and we moved him all over the floor to take advantage of that.

“We got in a two-man game to start the second half and got him some looks, posted him a few times and got him the ball at the top of the key and, really, he is a very talented scorer."