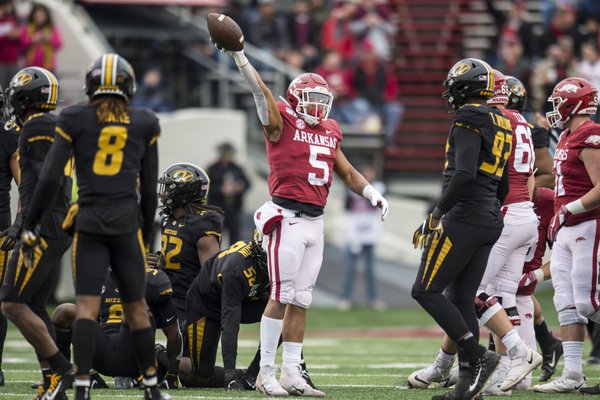 University of Arkansas running back Rakeem Boyd (5) celebrates a first down during the Battle Line Rivalry game against the University of Missouri Tigers at War Memorial Stadium in Little Rock on Friday November 29th 2019.

Running back Rakeem Boyd might have played his last game for the University of Arkansas on Friday.

Boyd finished his junior season with 184 carries for 1,133 yards after rushing 21 times for 95 yards in Missouri's 24-14 victory over the Razorbacks in War Memorial Stadium in Little Rock. He also had 19 catches for 160 yards this season.

Numbers like those in the SEC will get the attention of NFL teams.

So Boyd, who has played through injuries to both shoulders in his two seasons with the Razorbacks, has a decision to make about whether to return to Arkansas for his senior season or enter the NFL Draft.

Boyd said he's not sure what he'll do, saying he'll talk to his family and also rely on the advice of running backs coach Jeff Traylor.

"Coach Traylor is like a father figure to me," he said.

Barry Lunney Jr., the Razorbacks' interim coach, said he hopes Boyd will be back at Arkansas next season.

As a sophomore after transferring to Arkansas from Independence (Kan.) Community College, Boyd rushed 123 times for 734 yards and had 23 catches for 165 yards.

"He's been a great running back for this program," Lunney said. "He's just matured and matured, and I think he's on the right track.

"I think he needs to be back here carrying the ball for the Razorbacks again. He's just been really steady. He's gotten better each of the two years.

"I think he's got a lot of football in front of him. He's got a high ceiling that is not anywhere close to being reached. I think it would be really beneficial for him to be wearing that Hog uniform again."

The announced crowd for Friday's game was 33,961, which was tickets distributed.

That was the second-smallest crowd in War Memorial Stadium since Arkansas joined the SEC in 1992. The smallest crowd was 22,329 against LSU in 1996.

But Razorbacks interim Coach Barry Lunney Jr. was full of praise for the fans considering Arkansas had lost eight games in a row coming into Friday's matchup and has now suffered consecutive 2-10 finishes.

"First of all, I've just got to say I can't thank Little Rock, our fans, enough," Lunney said to open his postgame news conference. "You saw today what our fans and our people are made of.

"They showed up in an incredible fashion and gave our team fuel and energy like lots of teams over the years have experienced. I'm so grateful for how our fans rallied around our team despite the circumstances. It was very moving for me and our football team."

"They were into it from the Hog walk, from the moment we took the field," he said. "That's our people. I know however many there were at [the game], we had that many more people rooting us on from home [watching on television] and listening on the radio.

"That's the beauty of this state, is that on [game days] we can come together in the fall and get behind the Razorbacks. It's a unique thing across this country.

Arkansas senior linebacker De'Jon Harris had 11 tackles to give him 101 this season. It's the third consecutive season he's had more than 100 tackles, including 115 in 2017 and 118 last season.

In 48 career games, including 36 starts, Harris made 371 tackles to rank fifth on the Razorbacks' all-time list.

"He's got a future in football, there's no doubt."

Missouri receiver Jonathan Nance, a graduate transfer from Arkansas, had 3 catches for 38 yards against his former team, including a 10-yard touchdown pass from Taylor Powell that extended the Tigers' lead to 24-14 with 8:47 left.

Powell, a redshirt sophomore from Fayetteville, came off the bench to complete 8 of 14 passes for 105 yards.

"It meant a lot to me," said Banister, who began his Missouri career as a walk-on. "It was a lot of fun.

"It's something that I will remember for the rest of my life. This game is marked on my calendar every year."

"I know what it is like to go back and play your home school," said Tigers Coach Barry Odom, who is from Ada, Okla., and as a linebacker for Missouri played against Oklahoma and Oklahoma State. "I'm proud of the effort [of the Tigers from Arkansas]. I'm proud of the focus. It isn't easy to handle those things some of the time. I think they all played really well."

Friday's game marked the end of Arkansas playing at least one game in Little Rock for 88 consecutive seasons, including every season since War Memorial Stadium opened in 1948.

Arkansas has played in Little Rock every season since 1932, beginning with a 20-6 victory over Baylor.

The Razorbacks will play their spring game in 2020 in War Memorial Stadium, but not another regular-season game until they face Missouri on Nov. 27, 2021.

Bell started in place of true freshman Mataio Soli, who had started 10 consecutive games since Dorian Gerald suffered a season-ending neck injury in the opener. Mason started for junior Kamren Curl, who was ill.

Redshirt sophomore cornerback Montaric Brown was back in the starting lineup after missing last week because he was ill.

Missouri beat Arkansas for the fourth consecutive year to improve to 8-3 against the Razorbacks.

Since the Tigers joined the SEC, they're 5-1 against Arkansas. The Razorbacks' only SEC victory over Missouri was in 2015 when Arkansas won 28-3.

Arkansas' seniors were introduced and ran through the "A" formed by the Razorback marching band before their final game for the UA.

The seniors also were introduced and honored in a pregame ceremony with their family members on Nov. 10 when Western Kentucky beat Arkansas 45-19 in the Razorbacks' final game in Fayetteville this season.

Arkansas junior receiver De'Vion Warren played after missing the previous three games because of an ankle injury he suffered at Alabama.