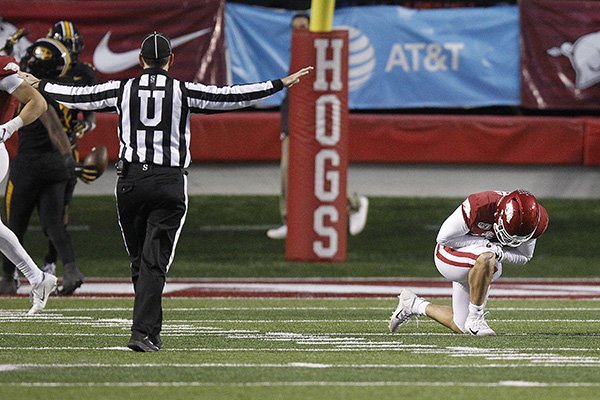 Arkansas quarterback Ben Hicks (6) reacts after a fourth down incompletion on the Razorbacks final drive during the fourth quarter of the Razorbacks' 24-14 loss to Missouri on Friday, Nov. 29, 2019, at War Memorial Stadium in Little Rock.

LITTLE ROCK — A long, hard football season ended Friday with the University of Arkansas’ 19th consecutive SEC loss, this one to a Missouri team that had lost five consecutive games and every road game this season.

This has been the most disappointing football season in Razorbacks’ history. A second consecutive 2-10 record with no sign of improvement is unheard of at a school that was once a national powerhouse.

It’s easy to point fingers, but there’s no need for that again. Everyone knows what happened when Chad Morris was hired.

He had installed Clemson’s national-championship offense as an assistant. His SMU team improved each of his three seasons there, but it went unnoticed at the time that he had never beaten a Power Five school.

Meanwhile, the Razorbacks are losing not only to SEC teams but also programs that were paid well to lose in Fayetteville.

Despite the state of affairs and a cold, windy day, more than 30,000 Hog callers showed up at War Memorial Stadium in Little Rock to cheer hard until Missouri took a 24-14 lead midway through the fourth quarter. That final score was indicative of the mundane game.

Arkansas had 242 yards of offense, and Rakeem Boyd got 95 of those with his legs.

The Razorbacks started their fifth different quarterback and Missouri started its third, but it took Fayetteville native Taylor Powell coming off the bench for the Tigers to secure the victory.

Arkansas’ last win was Sept. 14 against Colorado State. What the fan base has endured since has been a huge test of loyalty.

Justifiably, many are beyond frustrated. Some are downright angry.

The fall started before Morris, but he wasn’t the right leader to turn the program around.

There are some good players and coaches on this 2-10 team, but there’s not enough of them.

Athletic Director Hunter Yurachek will meet with the team no later than Monday to reassure the players that he is going to hire the right guy as their next coach.

Yurachek’s job is to find a person willing to take on this chore and succeed. It is not monumental, but it is big, and a few coaches have made it clear they are not interested in the challenge.

That’s fine, because Arkansas doesn’t need someone who is afraid to put his brand on this program and make it proud again.

Where Yurachek finds that person is up to him. That person, like the majority of these players, deserves support.

Yurachek no doubt has had conversations with agents, and when the regular season ends tonight, it’s on. He waited until the end of the season, and that’s more than some ADs do.

The memories of Houston Nutt beating LSU and Bobby Petrino taking the Hogs to a BCS game leave no doubt it can happen at Arkansas again.

Yurachek wants someone who cannot only recruit but teach players. That’s how you coach them up.

Teaching fundamentals such as looking off the primary receiver and tackling to the ground is how teams improve. Better evaluations and keeping Arkansas players at home would be a great start.

Yurachek has the biggest hire of his life in front of him, because the program is at ground zero.