Down and out: Depleted Hogs battle before losing 9th in row 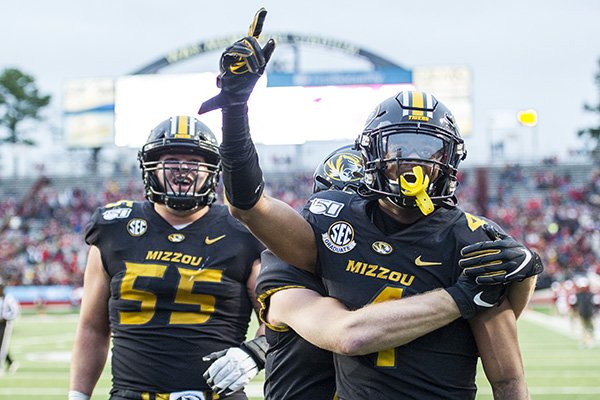 Missouri receiver Jonathan Nance celebrates after scoring a touchdown during the fourth quarter of a game against Arkansas on Friday, Nov. 29, 2019, in Little Rock.

A bout with the mumps and the revenge of players with Arkansas backgrounds combined to knock the Arkansas Razorbacks down on a dreary Black Friday.

The University of Arkansas found an opponent more on its own level with a visit by struggling Missouri, but the Tigers rallied from a second-half deficit for a 24-14 victory before an announced crowd of 33,961 at War Memorial Stadium in Little Rock.

Arkansas capped a second consecutive 10-loss season with its ninth defeat in a row, which is a school-record 19th consecutive loss in SEC play. Arkansas (2-10, 0-8 SEC) lost their last nine games for the second time, joining the debut season of Bret Bielema in 2013.

The Razorbacks lost their fourth game in a row to Missouri (6-6, 3-5), their 12th consecutive trophy game and their fifth SEC game in a row at War Memorial dating to 2012.

Interim Coach Barry Lunney Jr. prodded more competitive efforts from the Razorbacks the past two weeks, but he fell to 0-2 at his alma mater after taking over for the fired Chad Morris.

"We knew it was going to be a challenge, and we knew we were going to need to have some field position and a turnover or two, and we had that going there," Lunney said. "We just didn't have enough to finish that out."

Missouri had its hopes for a bowl berth dashed earlier this week by the NCAA appeals committee, which upheld its bowl ban, but the Tigers fought for a .500 record by outgaining Arkansas 329-242 in total offense to snap a five-game losing streak.

"It wasn't pretty, we all know that, but it was a win, and I'll take as many of those as we can get," Missouri Coach Barry Odom said. "Wish we had an opportunity to go play in a bowl game somewhere, but they can't take those six [wins] from this team."

An already thin Arkansas roster was severely depleted in the secondary and at linebacker.

"We were just kind of a shell of ourselves in some areas out there today," Lunney said. "It's been a challenge. It's not an excuse.

"I've never seen anything like it, and don't know if I will again. We've not necessarily been ravaged, but we've been dealt some tough blows just through the injury and through the sickness and the illnesses."

Despite those hardships, the Razorbacks broke on top early and regained the lead in the second half thanks to sterling field position.

After stopping Missouri on fourth and 1 from its own 39 on the Tigers' first series, Arkansas capitalized.

Starting quarterback Jack Lindsey capped a 38-yard drive with his only first-half completion, a 19-yard touchdown strike to Trey Knox to put the Razorbacks on top 7-0 at the 6:49 mark of the first quarter.

"After I scored I was like, 'We got this,' " Knox said. "We just fell apart. We kept three and out, three and out, stalling out every drive. You can't do that and win games."

Lindsey, making his first career start in his second college game at quarterback, completed 10 of 26 passes for 75 yards and 2 touchdowns, playing all but the final series. He became the fifth different starting quarterback for the Razorbacks in five games.

Ex-Razorback Jonathan Nance caught a back-breaking 10-yard touchdown pass with 8:47 left in the game to put the Tigers up by 10 and complete the scoring.

"I knew I would have a one-on-one to the boundary, so I just took a three-step drop, read where the corner was at -- and he was high and eyes on top, so I back-shouldered it and gave Jon Jon a chance," Powell said of his first college touchdown pass. "It was cool."

Nance's touchdown catch was the first by a Missouri receiver against SEC competition this season.

Powell and Lindsey are close friends as well as former teammates at Fayetteville who have both attended and played in many games in Fayetteville and Little Rock. Powell went 2-1 in state championship games in Little Rock.

"This a great place," he said. "I love War Memorial. Lot of good memories here."

Powell completed 8 of 14 passes for 105 yards, with a touchdown and an interception.

Another Fayetteville alum, Barrett Banister, led the Tigers with six catches for 60 yards, including three key third-down grabs on a first-half drive that led to an equalizing touchdown for Missouri.

Rakeem Boyd had a game-high 95 rushing yards for Arkansas, while Missouri's Larry Rountree had 88 yards and a touchdown.

The Razorbacks stayed in contention most of the game, unlike the last five outings that produced a 254-80 scoring differential for an average of 51-16 per game.

"We did have a shot," Boyd said. "We got up early, then there were some mistakes we made and we didn't really execute often."

Senior linebacker De'Jon Harris, whose 11 tackles gave him 101 for the year and three consecutive seasons with 100-plus tackles, said he appreciated the fight his teammates showed.

"That's basically what the seniors, the message we gave last night. Just go out there and don't give up. Try to build on something," Harris said.

"I thought we fought pretty hard," linebacker Bumper Pool said. "This season hasn't necessarily been what we wanted or any way close to that. But today I feel like we came together as a team and rallied behind Coach Lunney.

"Losing is never acceptable. But seeing the fight in everybody, especially for the seniors, was really cool."

The Tigers scored the final 10 points of the first half to take a 10-7 lead into halftime.

Arkansas caught a big break on the first play of the second half when Powell threw errantly into the right flats and nickel back Greg Brooks Jr. picked him off and returned the interception to the Tigers' 26.

Lindsey broke off a 15-yard run on the next snap, and two plays later he connected with tight end Grayson Gunter on a 10-yard pass for a touchdown and 14-10 Arkansas lead.

Missouri made a concerted effort to go up-tempo a couple of possessions later and it paid off.

Powell led an eight-play, 84-yard touchdown drive that ended on Tyler Badie's 3-yard run for a 17-14 Missouri lead at the seven-minute mark of the third quarter.

The Razorbacks had a historically poor defensive showing this year, finishing the season with a school-record 442 points allowed as well as a single-season worst 66.6% completions allowed.