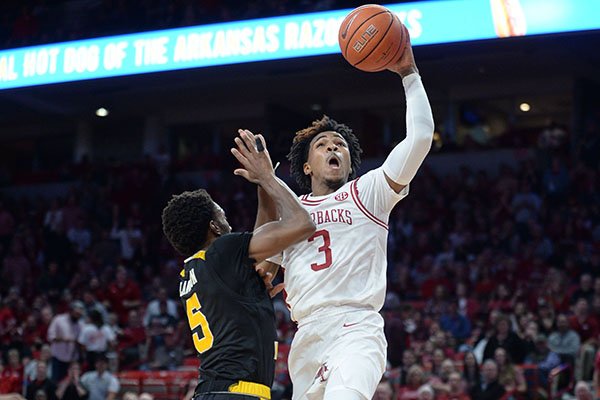 Arkansas guard Desi Sills (3) reaches to score Saturday, Nov. 30, 2019, as he is fouled by Northern Kentucky Bryson Langdon during the first half of play in Bud Walton Arena.

FAYETTEVILLE — Desi Sills and Jimmy Whitt combined for 41 points as Arkansas overcame the absence of its leading scorer Saturday to hold off Northern Kentucky and stay undefeated with a 66-60 victory.

The Norse trimmed a 10-point Arkansas lead to two in the final 30 seconds but Adham Eleeda’s potential go-ahead 3-pointer rimmed out with 14 seconds left and the Razorbacks (7-0) sealed the game from the free throw line.

Sills finished with 17, one shy of his career best. His up-and-under finish with 2:22 left in the first half gave Arkansas its first real lead of the game, other than a 2-0 start, and his three swished free throws with 9:40 left put the Razorbacks up by double digits for the first time.

The Norse (5-3) kept the game close, thanks in large part to their 3-point shooting. Entering the game, no team had made more than three from beyond the arc in a game against Arkansas. Dantez Walton hit three of Northern Kentucky’s five in the first half and the visitors finished 8 of 24 from range, well ahead of Arkansas’ Division-I leading 14 percent 3-point defense.

Mason Jones, whose 18.1 points per game leads Arkansas, did not play. Jones was nursing a shoulder injury, according to the Arkansas pre-game show.

Whitt’s 24 points tied a season high and Watson led all scorers with 30.

Northern Kentucky: Arkansas is one of two power-conference teams on Northern Kentucky’s schedule this year, but the Norse decently represented themselves in Fayetteville. Continued play like Saturday could see them in quality position to defend their Horizon League title.

Arkansas: The Razorbacks’ 7-0 start is their best since the 1997-98 season when they began the year with eight straight wins. That team was beaten in the second round of the NCAA Tournament by eventual national runner-up Utah.

Northern Kentucky: The Norse travel to Ohio to play Mid-American Conference’s Miami (Ohio) on Tuesday. Northern Kentucky has one win against a MAC foe, Ball State, already this year.

Arkansas: Austin Peay visits Fayetteville on Tuesday. It will be the teams’ third meeting in four years and fifth all-time. The Razorbacks won last year’s game 76-65.

The Razorbacks survive an upset bid from the Norse behind 24 points from Jimmy Whitt and 17 from Desi Sills. Arkansas improves to 7-0 on the season.

NKU missed a wide-open corner 3 with under 30 seconds to play that would have given it a late lead. Beautifully designed play, but the shot didn't fall. Dantez Walton scored a game-high 30 points.

We'll have more from today's game a little bit later on WholeHogSports.com.

This one has been a bit too close for comfort down the stretch. Dantez Walton, the Norse's leading scorer coming into the game at 14.7 per game, has a game-high 30. He grabbed an offensive rebound and kissed a floater off the glass to cut the Razorbacks' lead to one.

Isaiah Joe is at the line. He just missed the front end of two free throws.

Jimmy Whitt and Desi Sills will get a lot of the talk following this game, but Reggie Chaney played his tailed off this evening. He totaled six points, 11 rebounds and five assists prior to fouling out just before the media timeout.

Whitt has a team-high 22 points and Sills still has 17. They've been pretty solid all game.

NKU, which came into today's game taking 48.5 percent of its shots from 3-point range, have knocked down 8 of 21 attempts and stayed in the game that way. Dantez Walton has been phenomenal, scoring 26 points on 9 of 13 shooting.

Isaiah Joe was also fouled attempting a 3 across from the Razorbacks' bench, and he, too, made all three free throws to balloon Arkansas' lead to 12 at the time. Joe has nine points on 2 of 9 from the floor and 2 of 8 from deep. He is 5 of his last 18 from deep.

Jimmy Whitt (18 points) and Reggie Chaney (4) each have eight rebounds to lead the Razorbacks, which are plus-5 in the rebound battle (30-25).

Jimmy Whitt and Desi Sills have carried Arkansas offensively today. They have combined for 35 of the Razorbacks' points - 18 and 17, respectively. Sills was fouled attempting a 3 from the corner across the floor from the team's bench and knocked down all three free throws.

Northern Kentucky is shooting 4 of 12 in the second half and 2 of 6 from deep. The Razorbacks have forced three second-half turnovers as well and now have their largest lead of the afternoon.

Jimmy Whitt has been a majority of the Razorbacks' offense since the break. He has a team-high seven points on 3 of 4 shooting since halftime and 16 for the game. He also has six rebounds.

Desi Sills just added his first bucket of the second half on a terrific spin move in the lane. Sills has a season-high 14 points and has set a career-high with seven 2-point scores. He's been phenomenal at the rim today.

Isaiah Joe knocked down his second 3 of the game on a busted play late in the shot lock, answering Tyler Sharpe's 3 to open the second half. Joe has six points, four assists and three turnovers today. He's not been himself, but that was a big shot to get things going after the break.

Jimmy Whitt has Arkansas' only other bucket, a pull-up from about eight feet.

Jeantal Cylla, who started both halves today, is already on the bench. He sits in favor of Jalen Harris.

The Razorbacks closed the first half as well as you could have asked, scoring the final 10 points over the last three minutes, 37 seconds.

Desi Sills is having perhaps his best game of the season. He has a team-high 12 points on 6 of 11 shooting. He also has a pair of steals, one that turned into a dunk on the other end. He's been relentless attacking the rim, and he has finished very well.

Jimmy Whitt aided Sills with nine points, six during the 10-0 run. He and Sills combined for all 10 of the points in the spurt.

Jeantal Cylla, after starting his first game with the Razorbacks, played only three minutes in the first half. Reggie Chaney came in in place of him and provided energy and production with four points and a team-high six rebounds in 12 minutes. He was a plus-10 in the first half.

The Norse shot the ball well in the first half, especially from 3. They made 5 of their first 9 attempts before cooling off and misfiring on their last four. Dantez Walton scored a game-high 15 for NKU. Walton committed four of the Norse's eight turnovers.

The Norse have fared much better than Arkansas' previous opponents beyond the 3-point line. NKU has knocked down 5 of its 9 attempts from deep.

Dantez Walton has a game-high 15 points on 6 of 8 from the floor and 3 of 4 from 3-point range and Trevon Faulkner has eight for the Norse. Those two have given Arkansas fits.

Desi Sills has a team-high eight points for Arkansas on 4 of 9 shooting. Reggie Chaney also has four. No other Razorbacks player has more than three.

Desi Sills is having a nice game so far. He's got a team-high six points on 3 of 6 from the floor. All of his scores have come at the rim.

Adrio Bailey isn't off to a good start today. He has three turnovers, a miss under the rim and a 3-point miss from the top the key. Reggie Chaney has two points and a team-high three boards off the bench.

Give NKU credit, they have not been fazed in this environment. There's a good crowd in Bud Walton Arena today, but they've kept the crowd fairly quiet today - with a couple of exceptions - by making shots and playing solid defense out of their 2-3 zone.

Arkansas has climbed back into this game after falling behind 13-4 thanks to scores from Adrio Bailey, Isaiah Joe, Jimmy Whitt and Desi Sills. Sills swiped the ball from an NKU guard and threw down a two-handed dunk on the other end just before the media timeout.

Joe knocked down his first 3 of the game from the left wing - probably 3 feet beyond it. Bailey added a midrange jumper and Whitt got a tip-in to fall.

Razorbacks are 1 of 6 from 3 so far, and Sills is 0 of 2 but playing well defensively.

Reggie Chaney has Arkansas' only score since the first stoppage in play. He caught at the free throw line, took a couple of dribbles and laid a floater off the glass. Nice move from him.

Razorbacks look sloppy defensively, especially defending the 3. The Norse have knocked down 2 of their first 3 attempts from deep, and Eric Musselman calls for time for the first time this season.

Desi Sills scored the first bucket of the game on a baseline out of bounds play. NKU has scored eight straight.

Razorbacks guard Mason Jones will not start today and is likely out. According to Arkansas' pre-game radio show, Jones is dealing with a shoulder injury. He did not go through pre-game layup lines.

Eric Musselman also announced today that former Arkansas defensive lineman Jamario Bell has joined the team as a walk-on. He certainly can provide some physicality and another interior presence to a thin, undersized frontline.

NKU enters today's game 5-2 overall. It lost its toughest game to date at Missouri, 71-56. Sharpe led the Norse with 18 points and, as a team, they shot 8 of 29 from 3-point range against the Tigers. That is something else to keep an eye on: NKU's 3-point shooting. According to KenPom, 48.5 percent of its field goal attempts this season have come beyond the arc. Arkansas needs to be sharp in that area, as it has all season.

Walton is the Norse's top player. He takes 32.8 percent of the team's shots when in the lineup and he has shot 38.5 percent from deep on 39 attempts this season.