Hogs out to keep Norse from signature victory 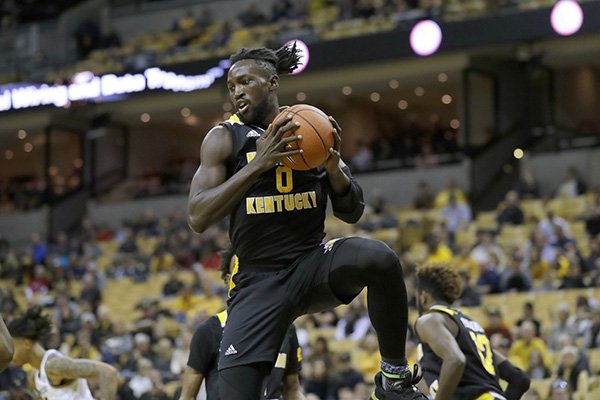 FAYETTEVILLE -- Since Northern Kentucky's basketball program moved up to NCAA Division I status for the 2012-13 season from Division II, the Norse have played in the NCAA Tournament in 2017 and 2019 and the NIT in 2018.

"We were really fortunate to take over a program that's had recent success with some good players returning," said Northern Kentucky Coach Darrin Horn, who previously was the coach at Western Kentucky and South Carolina. "This is a place that really cares about basketball. We're committed to winning and continuing to build the program.

"The next logical step is we've never beaten a high-major team in school history. Never. It would be a huge step."

Last season, Texas Tech started its run to the Final Four -- where the Red Raiders lost to Virginia in the NCAA Tournament final -- with a 72-57 victory over Northern Kentucky in Tulsa.

The Norse lost 71-56 at Missouri earlier this season to drop to 0-4 against SEC teams.

Northern Kentucky will try again for an elusive victory over a high-major conference team when the Norse (5-2) play the University of Arkansas (6-0) at 4 p.m. today in Walton Arena.

How big would upsetting the Razorbacks be for Northern Kentucky if the Norse could pull it off?

"It would be a signature win for our program, just because it's never been done," Horn said. "We want to compete and make sure we play in such a way that it gives us a chance against the best we play.

"From what I've seen, Arkansas is the best team on our schedule by far."

Upsets this season have included teams from the Missouri Valley Conference and Southland Conference beating No. 1-ranked opponents on the road. Evansville won 67-64 at Kentucky and Stephen F. Austin won 85-83 in overtime at Duke.

Hofstra, from the Colonial Athletic Association, won 88-78 at UCLA. Utah Valley, from the Big Sky Conference, won 79-78 at Nebraska.

"A lot of crazy stuff happens every night in college basketball," Arkansas Coach Eric Musselman said. "So the thing is, let's just worry about, 'How do we beat Northern Kentucky?' Up to this point, we've shown great maturity of really understanding and respecting our opponents."

Karl Harris, a 6-5 senior graduate transfer from Northern Arizona, is averaging 11.1 points off the bench for the Norse. Bryson Langdon, a 5-9 sophomore starting in Tate's place, is averaging 8.4 points and 3.9 assists.

"They've got experience," Musselman said. "They've got seniors that have played in big games. They've got a good record. It's a good basketball team."

"I don't think that's possible this year with the way Coach Musselman prepares us this year and the way his energy stays the same regardless if we're playing a top-5 team or a nobody," Jones said. "It's the same preparation, it's the same focus and discipline that he expects from us every game regardless of who we play."

"They're a high, high, high volume take a three-point shot team," Musselman said. "So our three-point defense is going to be very, very important."

The Razorbacks' three-point defense has been good enough to lead the nation at 14.0% with opponents hitting 13 of 93 attempts from beyond the arc. They rank third in scoring defense (50.0 points), fourth in turnovers forced (21.5) and eighth in field goal defense (35%).

"Watching Arkansas on film, I'm really impressed by their overall level of athleticism and the way that they're defending in general," Horn said. "Not a surprise from one of Eric's teams with their ability to switch and versatility defensively.

"I think the thing that stands out to me about them offensively is they really share the ball well. They're getting good ball movement. It looks to me like they're playing really unselfish."

As South Carolina's coach from the 2008-12 seasons, Horn was 2-2 against Arkansas, with the victories at home and the losses in Walton Arena.

"It's a great place to play and a great opportunity for us to play there, and we want to try to make the most of it," Horn said. "I think players want to play in big games and they want to play on the biggest stage that they can.

"For us, this is the best team on our schedule in an SEC arena, so our guys are going to be excited to play."

CHALK TALK Junior Jalen Tate, a returning starter at point guard for Northern Kentucky, will miss his fifth consecutive game after breaking his left hand in practice. Tate, who averaged 8.3 points and 6.3 assists the first three games before his injury, is expected to return to the lineup in late January. … Arkansas is leading the nation in three-point defense at 14.0% (13 of 93). … The Razorbacks and Norse have one common opponent this season with Texas Southern. Arkansas beat the Tigers 82-51 and Northern Kentucky lost 98-96. … Northern Kentucky Coach Darrin Horn was 2-2 against Arkansas when he was South Carolina’s coach from the 2008-09 through 2011-12 seasons. His Gamecocks beat the Razorbacks twice at home and lost to them twice at Walton Arena. … Arkansas Coach Eric Musselman was Nevada’s coach and Horn was a Texas assistant when the Wolf Pack beat the Longhorns 87-83 in overtime in the 2018 NCAA Tournament at Nashville, Tenn. … Northern Kentucky is 0-4 all-time against SEC teams, including 0-2 vs Kentucky and 0-1 vs Texas A&M and Missouri. The Norse lost 71-56 at Missouri earlier this season.