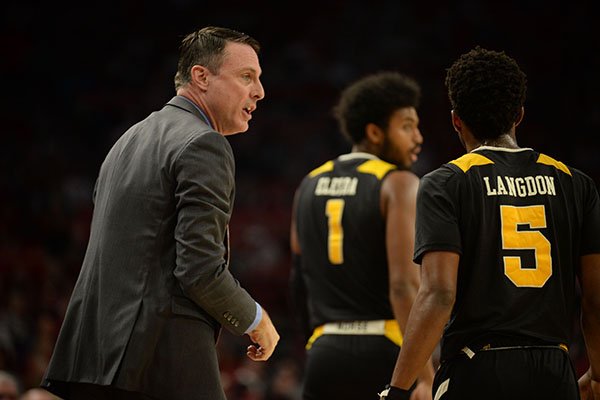 Northern Kentucky coach Darrin Horn directs his team Saturday, Nov. 30, 2019, during the first half of play against Arkansas in Bud Walton Arena.

FAYETTEVILLE — Before Darrin Horn took the court at Bud Walton Arena on Saturday afternoon, he felt like his Northern Kentucky team had a chance to steal a game from Arkansas.

The Norse were in the NCAA Tournament last season and Horn felt like his squad, playing without 6-6 star point guard Jalen Tate (broken hand), had a shot against Eric Musseman’s unbeaten Razorbacks

But Arkansas playing without injured leading scorer Mason Jones (18.5 points per game), was able to hold on for a 66-60 victory.

“I think we have a good basketball team and I have got a lot of respect for Eric and Arkansas, but also felt like they had some real offensive challenges with the way we play defensively, so to be honest with you I felt like that before I knew that Mason wasn't playing," Horn said. "And I think you have to. I don’t why you would feel any other way.”

Dontez Walton had a game-high 30 points and the Norse (5-3) hit eight 3-pointers against a Razorback team that had allowed only 13 3-pointers through its first six games. Arkansas had the nation's No. 1 3-point defense entering the game.

“I thought we had the best player on the floor,” Horn said. “Quite honestly, I didn’t think it was close in Dantez Walton. I thought he was outstanding and really impacted the game in a number of ways, not just scoring the basketball.

“So not happy with the loss, but I think this is something that we can take and try to build on as we move forward.”

“We didn’t feel like they had anybody that could guard him honestly and they play so few guys that it seems that they are a little less aggressive once they get in the scoring area because they don’t want to foul,” Horn said. “We were just telling him to be aggressive and we moved him all over the floor to take and take advantage of that.

“We got in a two-man game to start the second half and got him some looks, posted him a few times and got him the ball at the top of the key and really just, he is a very talented scorer, and we wanted to move him around and didn’t feel like they had anybody that matched up with him very well.”

Arkansas led by as many as 10 points in the second half before Northern Kentucky got it within 61-60. The Norse had a wide open 3-point attempt late that would have given them the lead.

“I am never OK with a loss, obviously, but really proud of our guys and how we competed,” Horn said. “We have really been challenged, especially in the last week and we needed to put a game together where we compete for 40 minutes, where we follow a game plan and where do the little things like get the floor for loose balls in key moments.

“I think we definitely did that tonight. We just didn’t make enough basketball plays to win the game. We got Adham Eleeda wide open at the end of the game and you couldn’t get a better look than that. It’s 62-60 and I don’t know how much time was on the clock, I think about 15 seconds maybe, and it just didn’t go in.

“We were really pleased with our effort to come into this environment and a team that we were definitely outmatched against athletically anyway.”

Horn thought Eleeda’s shot was going in, but it didn't and Arkansas senior Adrio Bailey grabbed the rebound and hit a pair of free throws to push the lead to 64-60.

"Adham is as good a shooter as we have in terms of just making shots," Horn said. "He just hasn’t been able to carry it into game action yet. I actually told him coming out of the last timeout, 'You are about to make a big shot for us. Your time is coming.’ So I actually thought it was going in, but it rimmed in and out.”

Nothing special other than wanting to know where he was all the time and make sure he didn’t get any clean looks,” Horn said. “One of the threes he got, we just totally blew it and left him. He shot it from maybe over in Rogers and still you can’t let him do that.

“I think he is the best shooter that we have seen and will see all year. I played against him last year when I was at Texas and I think he is an elite, elite shooter.”

Jimmy Whitt had 24 points and 9 rebounds, Desi Sills a career-high 17 points and Reggie Chaney had 6 points, 11 rebounds and 5 assists in the win.

“I just think he (Whitt) is a really versatile dude,” Horn said. “He is crafty, not overly explosive in terms of blowing by you, but by changing directions and getting guys on your hip band getting to two feet around the basket and either drawing fouls or getting the ball on the time.”

Sills was solid on both ends of the court.

“I think he is a kid that is really aggressive and plays with the kind of personality and approach that I am sure that Eric wants in his team and his players,” Horn said. “We were pleased in the way we guarded because Joe was the only real threat from three and he was 2 of 9 shooting so.

“But I think they hurt us a few times getting in the paint and getting some easy ones against our defense.”

Joe was one of the Razorbacks that the Norse fouled while shooting 3-pointers.

“That is one of the things that we talked to the team about afterward,” Horn said. “Guys, we have said we need to be together a game where we compete and are a team for 40 minutes. We did that tonight, but we have got to fix some basketball stuff. You can’t foul 3-point shooters. You can’t foul jump shooters. We fouled one on a little floater in the lane from about 12 feet which is the shot we wanted them to take all night.

“We challenged our guys before the game that if they can beat us making little 12-foot jump shots, then, God bless them, good game for Arkansas. But we fouled on one of those as well. There were a few plays like that - offensive execution plays that we can clean up and get better at so, in some ways, that is a positive thing, but it didn’t help us win the game.”