Shots are what's for breakfast for Hogs 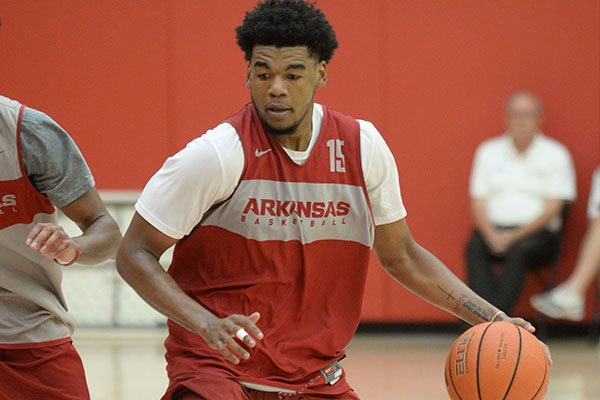 Arkansas guard Mason Jones (15) drives to the lane Thursday, Sept. 26, 2019, as guard Isaiah Joe defends during practice in the Eddie Sutton Gymnasium inside the Basketball Performance Center in Fayetteville.

FAYETTEVILLE -- Jalen Harris woke up before 5:30 a.m. on an early June day to the sound of the garage door opening at the house he shares with several other University of Arkansas basketball teammates.

"I was like, 'Who's leaving this early in the morning?' " Harris said.

Harris found out his roommate with the early wake-up call was junior guard Mason Jones.

Jones quickly was joined not only by Harris but also by sophomore guards Isaiah Joe and Desi Sills, and senior forward Jeantal Cylla for the early shooting sessions.

"We just started killing it at 6 every morning for an hour," Jones said. "We got a lot of shots up, then we'd lift weights, go to class, then it was time for practice."

Arkansas Coach Eric Musselman nicknamed the group the "Breakfast Club" and credited Jones for his leadership and work ethic.

"Before anybody got in the building, there were three or four or five guys here shooting," Musselman said. "Mason was one of the guys that spearheaded that group.

"Now with Mason, it's just about consistency on a daily basis. There are practices where he shoots lights out and is phenomenal, and then he'll miss a couple of shots and we've kind of got to bring him back to where he's got to get mentally."

Jones, who hit 76 of 208 three-pointers (36.5%) last season in his first season at Arkansas after transferring from junior college, said he believes the "Breakfast Club" workouts will help him become more consistent.

"Seeing all those other guys come with me and shoot that early, too, was amazing," Jones said. "We all could have still been sleeping in a little bit later, but we were waking up and grinding."

Joe hit an Arkansas record 113 of 273 three-point baskets (41.4%) last season, but he said he needed to get in plenty of extra shooting.

"It's definitely tough getting up that early every day," Joe said. "But getting all that extra work in before you do anything else -- I think we got up 300 or 400 shots every morning -- that's really going to help all of us get better."

Last season was Harris' first playing for the Razorbacks after he transferred from New Mexico and redshirted. He averaged 7.6 points and 5.6 assists in a team-high 30.8 minutes while starting all 34 games, but he shot 11.6% (8 of 69) on three-point attempts.

"I think a lot of it with shooting is mental, too," Musselman said of Harris' shooting struggles. "He's been getting in reps, he looks really good.

"I feel like his confidence is growing. I think with [Harris], it's really just getting him into a game and him knocking down a couple threes and then we'll see what we did behind closed doors. Hopefully, he'll shoot the ball at a much higher rate this year."

Harris said he's confident his hard work in the offseason will pay off, but he didn't want to predict what percentage he'll shoot from three-point range.

"I'm not going to put that type of pressure on myself, because if I don't shoot that percentage I don't want anybody coming at me," Harris said with a smile. "We'll have to wait and see."

Harris said he has altered his shooting technique and credited assistant coach Corey Williams, who was Stetson's coach the previous six seasons.

"When Coach Williams got here, he was telling me what was wrong with my shot," Harris said. "I was leaning back when I was shooting, which was a really big problem.

"So every time I worked out early in the morning in the summer, I made sure to stay straight up on my jump shot. When I jump now, I go straight up, not back.

"It helps me a lot because of the arch I put on the ball now. When I faded back, it was hitting the front of the rim a lot of times and bouncing away. I've got a better shooting touch now."

"Jalen's come a long way from where he was last season," Jones said. "I'm excited to see how he shoots this season, because I know he's ready to prove a lot of people wrong about his shot."

NOTEWORTHY Doors open at 1:30 p.m. … Seating is on a fi rst-come, first-served basis. … The Razorbacks will hold an autograph session after the game.