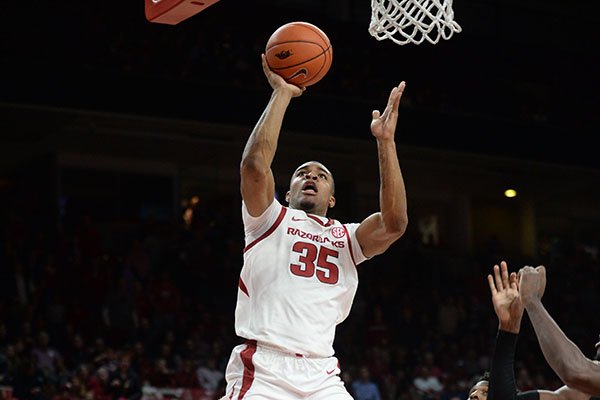 Arkansas Reggie Chaney (35) takes a shot in the lane over Georgia guard Tyree Crump Tuesday, Jan. 29, 2019, during the second half of play in Bud Walton Arena.

FAYETTEVILLE — You’ll forgive Arkansas sophomore Reggie Chaney if he doesn’t know a lot about Barnhill Arena, where the Razorbacks played basketball from 1953 through the 1992-93 season.

After all, the last Arkansas game there was played six years before Chaney (6-8, 222) was born in Tulsa. But he does know at least one thing about the place Arkansas will play its Red-White game Saturday at 3 p.m.

“I know that (Tulsa native and former Razorback) Lee Mayberry did a lot of great things there,” Chaney said. “I’m looking forward to learning more about it and seeing what it is going to be like for our game.”

Chaney, who finished his high school career at Henderson (Nev.) Findlay Prep, was one of Arkansas’ top players off the bench last season and is as tall as anyone on a team mostly void of size.

He logged 555 minutes, an average of 16.3 per game, last season while often playing behind current Chicago Bulls forward Daniel Gafford. Chaney also joined him on the floor for roughly 20 percent of the team's possessions.

“I am definitely ready to show people I belong out there on the floor,” said Chaney, who averaged 5.4 points, 3.5 rebounds and 1.3 blocks per game last season.

Chaney got an opportunity to showcase that when he started for Gafford in the NIT after Gafford chose to prepare for the NBA Draft.

Chaney was 7-of-9 from the floor and had season highs of 14 points and seven blocks, and five rebounds in 28 minutes in a 84-72 win at Providence in the NIT’s opening round.

“With Dan sitting out the NIT, that gave me a good look at what we've got for next year, so I think that was good for us,” Chaney said. “We are lacking in size. He likes to start guards, you know? Like, he’ll play Mason Jones at the 4 sometimes.

There was not one part of his game Chaney didn’t try to improve in the offseason after a rookie season in which he shot better from the field (55.3 percent) than he did from the free throw line (51.5 percent).

“My finishing, my shooting, my dribbling, I’ve literally worked on a lot of things, just my overall game,” Chaney said. “I want to prove a lot because my freshman year I felt like there are areas that I really needed to work on a lot that I couldn’t help my team out last year that I can this year.”

Chaney, who started in two games and played in all 34 contests for Arkansas (18-16), viewed himself as more of a defensive player last season.

Chaney said he never thought of transferring when former coach Mike Anderson was at the helm, but did wonder about things when he was fired on March 26 and before Eric Musselman was hired on April 7.

“When Coach A and them left it was hard, but I found out all these other guys (Musselman and his staff) were coming in and I’m like, ‘OK, I might as well stay because they’ve been on that (NBA) level.’ They can give me something I can take away from them. I know they can get to me that level faster.

“I’m the type of person that just wants to stick out a situation. I did want to see what was going to fall in place and didn’t want to make any decisions too fast. I wanted to just soak everything in and I thought the best opportunity for me was to stay put and stay right here.”

"He was really open with us and he let us say what we had to say and he said what he had to say," said Chaney. "And I was just willing to see what he was like on the court. I like him so far."