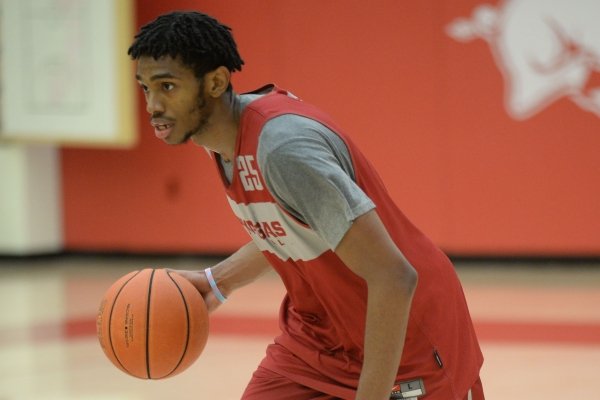 Arkansas guard Jimmy Whitt Jr. drives with the ball Thursday, Sept. 26, 2019, during practice in the Eddie Sutton Gymnasium inside the Basketball Performance Center in Fayetteville. Visit nwadg.com/photos to see more photographs from the practice.

FAYETTEVILLE — Jimmy Whitt's explanation for his transfer was simple.

"I have enjoyed my experience at the University of Arkansas, but I feel like it's time for me to make a change.”

That was the official statement from Whitt to Arkansas basketball fans on March 30, 2016, the day he announced his intent to transfer from former coach Mike Anderson’s program and pursue other opportunities after averaging 6.1 points as a freshman who played in all 32 games.

Three years and two full seasons in uniform at SMU later, his career has come full circle. On May 27, Whitt declared he would return to Fayetteville for his final season as a graduate transfer. The 6-3 guard arrived on campus in July - one month later than the rest of his teammates - and immediately provided experience and wisdom as a self-proclaimed thinker of the game.

“It’s comfortable,” Whitt said last month at Arkansas’ annual media day. “It’s different because a lot of grad transfers, they go to a different school, you know? It’s not usual that you come back to the same school. For me to come back, I was here when (the Basketball Performance Center) was first here, so a lot of it has been comfortable.

“I’ve still got a lot of friends and stuff here. It’s been a smooth transition.” 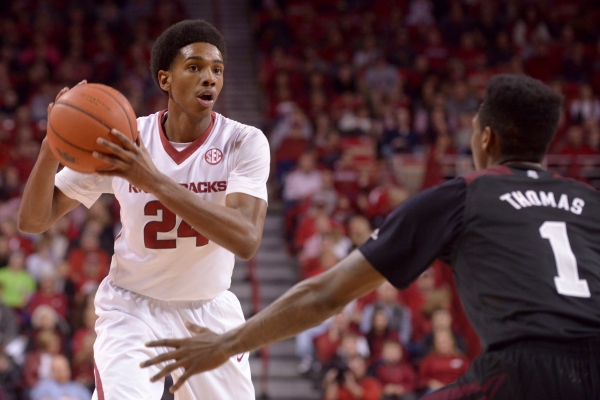 Jimmy Whitt, who played his freshman season at Arkansas under former coach Mike Anderson, has returned to the program as a graduate transfer for the 2019-20 season.

Whitt waited “until about the last day” to enter his name into the NCAA transfer portal, he said. Soon after that came a message from Arkansas coach Eric Musselman, the transfer maven who was hired to lead the Razorbacks in early April.

Whitt knew the program well and relayed to the coach there was no need to take an official visit. He did, though, visit unofficially.

From his perspective, Whitt was searching for a program with a coach and staff proficient in dealing with players in his position. Arkansas, after careful consideration, was a fit.

“Getting a lot of guys 1-2 years that were really focused and knew what they wanted, and he knew how to handle them and develop them, so that was big for me.”

Whitt averaged 11.4 points in 63 games - all starts - with the Mustangs, led by former NBA champion coach Larry Brown upon his arrival. The two remain close, and Whitt views the 79 year old as a mentor and father figure. He also shared a tight relationship with Tim Jankovich, who replaced Brown as SMU’s coach following Brown's resignation in July 2016.

Jankovich was fully supportive of Whitt’s wishes to test the transfer waters and ultimately leave the school, Whitt said.

“I loved my time at SMU,” Whitt said. “It just came down to sort of having to make a selfish decision on your part. … I had just felt like me coming back here and being with Coach Musselman was the best decision for me.”

His years at SMU allowed him to mature and develop into a more well-rounded player. Whitt admitted he didn’t see the bigger picture as a freshman with the Razorbacks. His singular focus in those days was himself and how good he could be, not team success. He was also critical of his game as a freshman, labeling himself a one-dimensional player.

Whitt posted averages of 1.7 rebounds and 1.1 assists per game at Arkansas. Those numbers rose to 5.8 and 3.7, respectively, in two seasons with the Mustangs.

"This year I feel like I’m just older. I feel it in my body, feel it in my knees and stuff," he joked. "You look at things differently. ... I think as a grad I’m coming in thinking what can I do to best serve the team, because you understand that when your team does good then everyone is going to get what they want out of it."

A native of Columbia, Mo., and former four-star recruit by Rivals, Whitt will showcase an uncommon game on the offensive end. His bread and butter is the midrange jumper, statistically one of the least efficient shots in basketball. Whitt shot 48.1 percent on midrange attempts in his final season at SMU, according to shot chart data collected by The Stepien.

It was engrained in him growing up, he said, and the first shot taught to him by his father.

"When I came here (Musselman) knew it was one of my strengths, and he told me he didn’t want to take that away," Whitt said. "He wanted to add to my game.

"He definitely said, ‘That’s something you do. I don’t ever want to take something away that makes a guy unique.’"