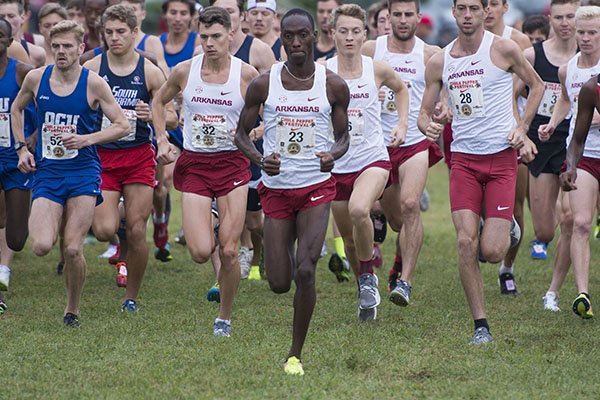 Arkansas' Gilbert Boit leads the pack during the Chile Pepper Festival on Saturday, Sept. 22, 2018, in Fayetteville.

FAYETTEVILLE -- The University of Arkansas' men's and women's cross country teams will run on their home turf for the first time this season Saturday at the Chile Pepper Festival.

Arkansas' women's team is ranked No. 2 nationally behind Colorado, while the men are ranked No. 25.

"We're always excited to run at home," Razorbacks women's Coach Lance Harter said. "The high schools are the center of attention, but we're glad we get to join in the festivities."

The 31st annual Chile Pepper Festival features a full schedule of races for college, high school and junior high teams, along with an open 10,000 on Saturday and a pair of mile races for youngsters tonight at the UA's Agri Park Course.

"There's nothing like the Chile Pepper anywhere else in the country," Arkansas men's Coach Chris Bucknam said. "It's an unbelievable atmosphere."

Katrina Robinson, who won the Chile Pepper title last year and was runner-up at the SEC meet, is redshirting this season to allow a hip injury to fully heal and junior Lauren Gregory is also being held out today.

Arkansas is an overwhelming favorite to win the SEC title, and Harter said he believes he has a team that can compete for the national championship as well.

"The Chile Pepper is the springboard into the rest of our season," Harter said. "It's always been good to us."

Arkansas' men's team will be led by in the 8,000 meters race by senior Gilbert Boit -- last year's SEC champion -- along with junior Matt Young and senior Graham Brown.

"This is the beginning of our competitive season," Bucknam said. "This is when it starts to get real."

Bucknam said the Razorbacks don't have as much depth on their roster as in past seasons.

"We'll compete hard and see how it goes," Bucknam said. "We'll get a good look at where our guys are at as we get ready for the SEC meet."

The SEC Championships will be Nov. 1 at Lexington, Ky., followed by the NCAA South Central Regional on Nov. 15 at Fayetteville and the NCAA Championships on Nov. 23 at Terre Haute, Ind.

About 6,800 runners are expected to compete in the Chile Pepper's various races this weekend.

"When it first started, the Chile Pepper was just the open race," Harter said. "Then it evolved with high schools added, and then the University of Arkansas teams were invited to run as well.

"It's really taken off and expanded over the years. So many of my coaching peers have run at the Chile Pepper and then tried to duplicate it at home, but it's never as successful as what we've got here."