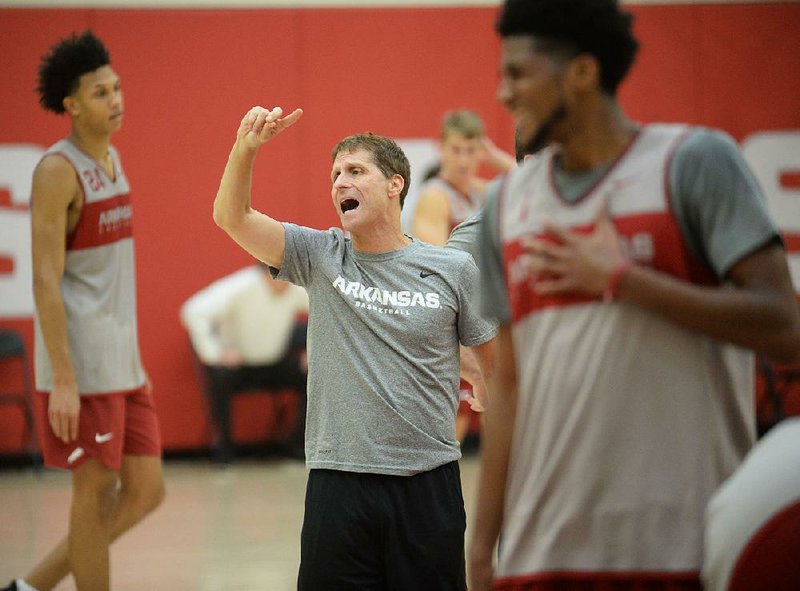 High school basketball prospects across the nation usually have the same goal-- to play in the NBA after college.

University of Arkansas men's basketball Coach Eric Musselman's resume includes being the head coach of the Golden State Warriors for two seasons and for one season with the Sacramento Kings. He was also an assistant for his father Bill with the Minnesota Timberwolves along with stops at Orlando, Atlanta and Memphis.

Several recruits have commented on how the Arkansas program operates much like an NBA franchise.

"Oklahoma City's coaching staff and management have always been at the forefront of opening their doors to other coaching staffs and have been ahead of the curves in many areas, including analytics," said Michael Musselman, Arkansas' director of recruiting. "Each of the staff members went to Oklahoma City with a designed area to focus on. Hays' was analytics and drills, Earl's was practice plan structure and Pat's was offensive and defensive schemes."

The staff's emphasis on the ways of the NBA isn't likely to change.

"We owe it to our current players to seek new and creative wrinkles to our offense and drills," Eric Musselman said. "Another key factor is staff development and for all staff members to continue growing our NBA contacts."

The NBA philosophy translated well at Nevada, where Musselman led the Wolf Pack to three consecutive Mountain West titles in his four years with three consecutive NCAA Tournament bids, including a Sweet 16 appearance.

"Our system the last four-plus years is predicated off NBA offensive and defensive philosophies," Michael Musselman said. "The drills we do, the schemes and scouting for game preps are done the same way Coach did them when he was with the Golden State Warriors and Sacramento Kings."

The Arkansas staff also has NBA ties. Assistant coach Corey Williams played for the Chicago Bulls for one season, while assistant Clay Moser also has an extensive NBA background that includes being with the Los Angeles Lakers in 2011-2019. Boykins also played 13 seasons in the NBA.

Eric Musselman and director of basketball operations Anthony Ruta have picked the brains of Golden State Coach Steve Kerr and his staff the past four years while attending the Warriors' training camp.

"The NBA is on the cutting edge of new and creative ways, and we feel it's imperative that our staff makes as many NBA contacts as possible," Michael Musselman said.

Arkansas is expected to host an impressive list of prospects on unofficial visits for the Red-White game in Barnhill Arena on Saturday.

ESPN 4-stars Fort Smith Northside center Jaylin Williams, 6-10, 220 pounds, and Jacksonville point guard Davonte Davis, 6-4, 170, are slated to visit. Williams is rated the No. 87 overall prospect in the nation for the 2020 class, while Davis is rated No. 79.

Davis, who committed to Oklahoma State in December, reopened his recruiting Tuesday.

Arkansas junior center target Daimion Collins, 6-9, 180 pounds, of Atlanta, Texas, is planning to make his way to Fayetteville for the intrasquad game.

Sophomore forward Kel'el Ware, 6-9, 190, of North Little Rock, is also expected to visit. He has an offer from Oral Roberts and is receiving interest from Arkansas and others.