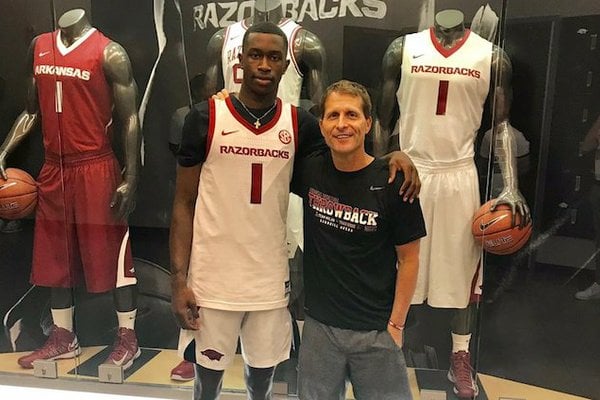 FAYETTEVILLE — Arkansas’ one day back in Barnhill Arena was exciting for Jacksonville senior star Davonte Davis, who de-committed from Oklahoma State earlier this week.

Davis (6-4, 175 pounds) was one of several Arkansas recruits in attendance for the program’s Red-White Game in Fayetteville.

“It was a great scene and I enjoyed watching the team go against each other,” Davis said.

He also got a chance to hang out with Arkansas coaches.

“We all got along well,” Davis said. “Talked about many different things.”

Davis has begun to think about which teams he might visit during his second go around in the recruiting process.

“I have a couple in mind, but not sure just yet,” Davis said. “I’m signing late most likely. I’m planning on taking all five official visits.”

The Razorbacks will get one of those.

Davis was an AAU teammate this spring and summer of a pair of other Razorback targets, West Memphis forward Chris Moore (6-6, 220) and Fort Smith Northside big man Jaylin Williams (6-10, 230). Williams was also at the scrimmage Saturday.