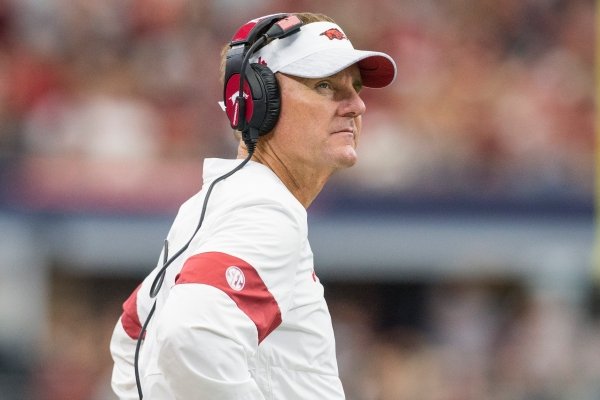 Arkansas coach Chad Morris is shown during the fourth quarter of a game against Texas A&M on Saturday, Sept. 28, 2019, in Arlington, Texas.

FAYETTEVILLE -- The Arkansas Razorbacks had their first open date of the season this week, but they were super active on several fronts, most notably getting younger players more live action and recruiting.

They even got a jump start on their game plan for Kentucky.

The University of Arkansas coaching staff is out recruiting in full force this weekend, including Coach Chad Morris. Many of the Razorback assistants posted their recruiting locations via social media Friday.

"As far as recruiting, it never ends," Morris said. "You've been around me long enough to know that.

"Recruiting never ends. In an open week, it actually amps up even more. So in the evaluation process coaches plan on getting out on the road this week and being at games and being in schools all day Friday and Saturday. We've got a great plan in place and that includes me being out and about Friday night."

The Razorbacks did good-on-good work in practice and added in live-tackling segments, particularly for the younger players.

"We picked and chose when we wanted to live tackle ... especially with some of our high-rep guys," Morris said on Wednesday. "Our younger guys, there was a substantial amount of time toward the end of practice, and it was a full-on, live-tackle [opportunity]."

"Kentucky prep is in full force, getting a plan together and getting our guys to understand the plan and be able to play at a high level," Morris said on Wednesday's SEC teleconference. "Again, it's about how we play, it's not who we play. That will continue to be my message."

Junior safety Kamren Curl is having a huge season for the Razorbacks, ranking among the top five safeties in the nation through five games, according to ProFootballFocus.com.

Both of Curl's interceptions have come with him playing free safety, but the Razorbacks are lining him up in the box, and in man and zone coverage with good results.

"He's put us in some of the right calls sometimes when we may have needed the right secondary coverage check. I'm really pleased with Kam."

Curl leads the Razorbacks with 39 tackles and has filled up his stat line with 2 sacks, 2 interceptions for 22 yards in returns, 1 pass breakup, 1 forced fumble and 1 fumble recovery for a 69-yard touchdown.

Tight ends coach Barry Lunney Jr. was pleased with the showing of senior Cheyenne O'Grady, who caught a career-high eight passes for 91 yards against Texas A&M.

"He played good the other night," Lunney said. "The best he's played in a while, just from top to bottom. He wasn't perfect by any means.

"But as far as just the week of preparation and the way he stayed engaged in the game and competed from top to bottom, that was his best game. We need more of that this coming week."

Offensive line coach Dustin Fry said his unit had a strong bounce-back game against Texas A&M after the Hogs' 31-24 loss to San Jose State the week before.

"We did a really good job," Fry said. "Obviously kept the quarterback upright more. That was very disappointing the way we got the quarterback hit against San Jose. We take a lot of pride in that."

Fry said the offensive line has been responsible for allowing five of the team's seven sacks this season.

"Our sack total is really low this year," he said. "We've got to keep those hits off of them, though. When that guy's getting hit, that's an issue."

Freshman Treylon Burks catches punts with his fingers up and his hands typically at helmet height, which goes against the norm for returners, who are normally trained to make double-underhanded catches in the breadbasket.

"When he started returning punts in fall camp, I was back there trying to coach my tail off and trying to get him fixed," Stepp said. "And Coach Morris finally looked at me one day and said, 'Hey, Stepp, just leave him alone.' Whatever you got to do to catch it."

Stepp said "NFL guys" on the sideline at AT&T Stadium for the Hogs' game against Texas A&M were telling him they'd never seen a player catch them like that.

"I said, 'I haven't either,' but it works," Stepp said. "He wears 5X gloves, which I think we have to order for him. He's got huge hands, and he goes and attacks the ball."

Tight ends coach Barry Lunney Jr., who also serves as special teams coordinator, went from the press box to the sidelines for the Texas A&M game.

"We weighed that a little bit," Lunney said of the debate about whether he should coach from the box or the field. "We just felt it was for me to be engaged with my players, then obviously the special teams perspective, to be able to be there and more involved."

Lunney said he and Daniel Da Prato, the quality control coach for special teams, can communicate better face to face. And now the tight ends bunch can sit and talk to him during the game.

"They were kind of a man without a home, so to speak, down there," Lunney said. "Now part of the reason we initially tried to do that was because of the experience and maturity we have there. I think it just worked out better for me to be with them, and I think that's something we'll probably stick with moving forward."

Junior T.J. Hammonds is working as a running back and receiver as the Razorbacks look for ways to get playmakers the ball in space.

"T.J. is a very smart kid," running backs coach Jeff Traylor said. "So, he's learning a little bit of both. We're working him back in slowly, and we'll continue to see how that evolves."

Hammonds, lined up in the slot, had a couple of receptions for 8 yards on forward "pop" passes that are essentially jet sweeps in his first game off suspension against Texas A&M.

"He's kind of like T.Q. [Jackson]," Stepp said. "He's a dynamic playmaker and brings some things as far as athletic ability and play-making ability that's different. That's on us as coaches to find the best place to put him."

Only one of Arkansas' first six opponents sports a winning record. Portland State, Ole Miss, Colorado State, San Jose State, Texas A&M and Kentucky are a combined 12-17 (.414). The No. 25 Aggies lead the way with a 3-2 mark.

Kentucky, Ole Miss and Portland State are all 2-3, while San Jose State is 2-2 and Colorado State is 1-4.