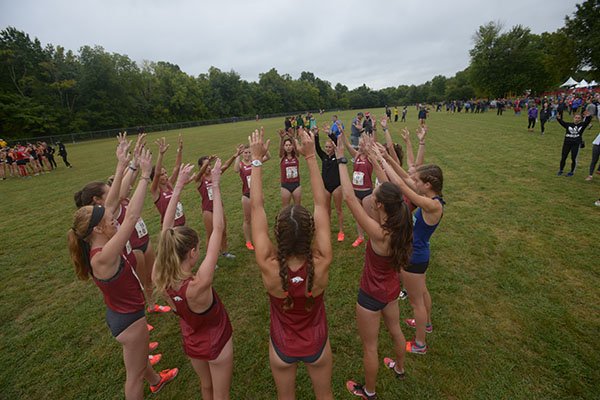 Arkansas runners call the Hogs during the Chile Pepper Festival on Saturday, Sept. 22, 2018, in Fayetteville.

FAYETTEVILLE -- This morning at the Chile Pepper Invitational on the University of Arkansas' Agri Park's cross country course, Coach Lance Harter's nationally ranked No. 2 Razorbacks women will run just one cog shy of the machine they hope will win another national championship next month.

The Chile Pepper marks the first nearly-running-at-full-strength meet for Harter's women and Coach Chris Bucknam's nationally ranked No. 25 Razorbacks men before striding into the Nov. 1 SEC Championships in Lexington, Ky.

Gregory, a junior third last year in SEC Cross Country, is on a "six weeks recovery program," Harter said, trying to heal a metatarsal stress reaction in her foot.

All-American Werner leads the Razorbacks and could lead the nation.

"Taylor is considered in the hunt for the national title," Harter said.

Oklahoma State, 19th, is the only other ranked women's team at the Chile Pepper. A total 70-teams divide for two races. Arkansas' women raced at 10:40 a.m. in a 30-team seeded field with OSU and some outstanding individuals via Big 12 members West Virginia, Texas, Oklahoma, and Baylor, and the Sun Belt's Arkansas State and Rice of Conference USA among others.

Bucknam's Razorbacks and Oklahoma State are among the 30 seeded men's teams racing at 9 a.m.

Bucknam and Harter laud the Chile Pepper's organizers for raising a $70,000 to be dispersed among 16 boys and girls cross country programs, among 16 Northwest Arkansas high schools, and not only bringing high school and junior college to campus, but also showcasing the UA to so many attending friends and siblings of the competitors.

"This is when it gets real for us," Bucknam said. "Even cross country has kind of an unofficial preseason running new guys and young guys in September and saving your best guys for the month of October. Chile Pepper is the kickoff for that. A great measuring stick for us."