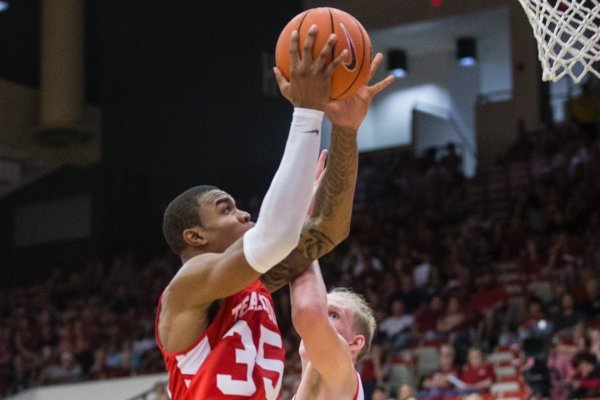 Late last month at Arkansas’ annual media day, Reggie Chaney said he was ready to prove to people that he belongs on the floor as a sophomore.

Chaney looked as if he belonged for stretches during a solid freshman season in 2018-19. He definitely did on Saturday in the Razorbacks’ annual Red-White Game in Barnhill Arena. The tallest player on the roster currently eligible for the upcoming season, Chaney finished with a game-high 19 points on 8-of-11 from the floor, 3 rebounds, 3 assists and 3 steals.

Arkansas coach Eric Musselman was pleased with Chaney’s performance and added that the forward played with confidence and within his skillset, one thing he did not do at times last season.

"He’s done a really good job of playing within himself, and then late in the game there were some plays run for him in the post as well, which didn’t really happen the first part of the game," Musselman said. "Toward the end of the game we started looking for Reggie a little bit in the post to see what he could do. He ... had some good patience. Reggie’s going to be a big key to who we are."

Among the highlights of Chaney’s day were a couple of shot fakes in the painted area that got his matchup off his feet. In both instances he beautifully executed up-and-under moves for scores. He appeared composed, played at his own pace and put nice touch on the layups, making sure to avoid the come-from-behind block attempts of the ultra lanky Connor Vanover, who finished with 15 points.

Chaney knocked down all three of his free throw attempts in the scrimmage, too, and one came after a good-looking midrange jump shot from around the left elbow on which he was fouled. Following the scrimmage, Chaney noted that he worked tirelessly this offseason to add an in-between jumper to his repertoire. Practicing game-ready shots has been his focus.

"I think today I was just trying to put in everything I’ve been working on through practice and just being at the gym, working on my finish and my footwork, working on my shooting, as well," Chaney said. "I just try to put all that in when we play."

Chaney also played the passing lane well at least once. With quick hands on the perimeter, he knocked the ball loose from Vanover and led a one-man break for a layup. It was an impressive sequence that reminded me a bit of when he finished with four steals in the Razorbacks’ home loss to LSU last season. He can absolutely be a pest for big men not used to handling the ball above the break.

"Reggie is a presence, physical, athletic," guard Jimmy Whitt said. "You don’t get a combination like that too often with a guy that has good size, athletic, can do the things he does on that block. He’s a presence and I think we’re really going to need that this year, especially from his position."

Jimmy Whitt is typically a very laid-back guy, but when the public address announcer in Barnhill Arena began rattling off the names of Razorbacks players for introductions prior to the scrimmage, he flashed back to his freshman season at Arkansas and felt those familiar nerves.

It is only an intrasquad scrimmage, but Whitt left an impression on fans in attendance in his second Razorbacks debut. The graduate transfer from SMU finished the day 7 of 9 from the floor for 14 points, showing off a nice midrange game, which is his bread and butter. He shot 48.1 percent on midrange attempts in his final season with the Mustangs, according to The Stepien.

"I thought I did pretty good," Whitt said. "Coming in here, I just wanted to have fun. I wanted all the guys to have fun and be able to showcase what we all can bring to the team individually. That’s what I wanted to do, showcase that I can rebound, defend, make some shots, make some plays. I feel pretty good about how it went."

In his press conference previewing the 2019-20 season, Musselman lauded Whitt for his ability to rebound as a 6-3 guard. It's one of the aspects of his game that made him a hot commodity in the NCAA transfer portal, the coach said. Saturday, in the first half, Whitt grabbed five rebounds in less than 15 minutes, tying him for the Team Eddie lead with Vanover. Senior forward Adrio Bailey had six at the break.

"He’s one of the best rebounding guards in the nation," Musselman added Saturday. "When you look at guys like, not to compare, but when (Russell) Westbrook is on the floor in an NBA game, he’s a great rebounder and it changes the defensive rebounding aspect, especially when a point guard can grab a defensive board. It ignites your offense a little bit more in transition."

On top of his efficient scoring day - he did not miss a shot until the final play of the third quarter - Whitt handed out three assists on Team Eddie's first eight buckets of the game.

"I think the biggest thing I learned through my college career is that it’s the little things that win games, and everybody has to have a guy on the team that’s willing to sacrifice and do the little things," Whitt said.

Hogs different with Vanover on floor

Connor Vanover electrified the announced crowd of 4,559 in Barnhill Arena with a pair of first-quarter 3-pointers for Team Eddie. Those opening few minutes were a sample of what could be if Vanover is granted a waiver from the NCAA for immediate eligibility.

Musselman remarked at Arkansas' efficiency when Vanover was on the floor Saturday.

His team was plus-20 in his 12 first-half minutes, and in nearly seven minutes together, the lineup of Vanover, Whitt, JD Notae, Bailey and Isaiah Joe outscored Team Nolan 19-8, scoring at a sizzling 1.475 point-per-possession clip.

"We’re a lot different when he’s on the floor because he spaces it. He adds a dimension from, obviously, the size factor, but his three-point shooting," Musselman said. "When you put him out there with some of our other guys, our spacing just opens up and there’s a lot more dribble-drives.

Vanover finished with seven rebounds in the scrimmage - five in the first half - and a pair of steals, one in each half.

While it was certainly fun to see Vanover in action again, there has been no word, according to Musselman, on his waiver. As he has said previously, the team is preparing as if Vanover will be in a developmental year. Joe added that the big man being eligible this season would "help us tremendously." He's absolutely right.

Alongside Vanover, Isaiah Joe pushed Team Eddie to a big lead in the early stages of Saturday's game. He knocked down three of his first five attempts from 3-point range and looked to be on pace for a Red-White performance similar to last year when he made 10-plus triples.

Joe hit four 3-pointers in the first half, led his team with 12 first-half points and he also handed out four assists. He seemed to have it all going. He did not, though, score again after the break, and in the second half he missed all five shots and turned the ball over four times.

The sophomore, looked at as the leader of the team this season after a phenomenal freshman campaign, said fatigue played a bit of a factor in the team's first public action of the year. His group, which made 17 of 29 shots in the first half, was just 6 of 21 after changing over to Team Nolan.

"You're going to have those off shooting days. You've got to learn how to overcome (being tired)," Joe said. "Overall, it was just a bad shooting half for the second half, but in my mind I'm going to make the next shot, so I'm going to keep shooting."

The Razorbacks' other guards turned in OK games. Mason Jones and Desi Sills scored 10 points apiece and grabbed a combined four rebounds. Point guard Jalen Harris, who noted on media day that he worked all offseason to improve his 3-point shot, finished with two points on a breakaway dunk in the second half. He attempted only two shots, both inside the arc.

Jones and Sills struggled with their touch from 3-point range Saturday. Jones misfired on one 3 in the first half for Team Nolan, then was unable to connect on his final three attempts. He did, however, have a pair of very nice finishes at the rim through contact.

Sills finished the day 1 of 6 from 3-point range, but recorded three assists - all in the second half - and three steals. He is going to be a big piece of what Arkansas does this season. If he can provide consistent perimeter scoring, alongside Joe and Jones, as he did down the stretch last season, the Razorbacks could be dangerous. He has the ability to be a menace defensively, and Musselman loves that aspect of his game.

I will be interested to see how Arkansas' guards kind of bounce back in their first exhibition game against Arkansas-Little Rock on Oct. 20.