Whitt shows off his versatilty in Barnhill throwback 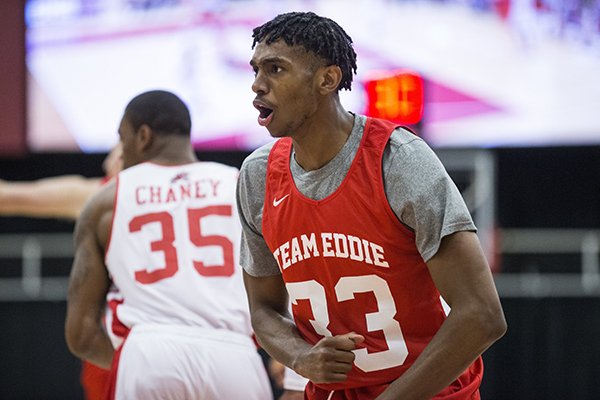 Arkansas guard Jimmy Whitt (33) is shown during the Razorbacks' Red-White Game on Saturday, Oct. 5, 2019, in Fayetteville.

FAYETTEVILLE — So much for the saying that you never get a second chance to make a first impression.

Jimmy Whitt, who played his freshman season at Arkansas before transferring to SMU, reintroduced himself to the Razorbacks faithful on Saturday during the Red-White Game at Barnhill Arena.

Whitt had 14 points, 6 rebounds and 3 assists during the contest, which his team officially won 62-54 after he switched jerseys from Team Eddie and Team Nolan at halftime.

“When they were calling the names (in pregame introductions), at first I was really chill because I usually have a really calm demeanor, but once they started calling names and seeing all the people, I had that feeling that I got my freshman year,” Whitt said. “So, it was a cool experience of how I felt like my life had gone full circle for a moment. I started here and now I’m finishing my career here. It was exciting.”

Whitt was 7-of-9 shooting from the field during the scrimmage at Barnhill, where Arkansas last played in 1993.

“I thought I did pretty good, Whitt said. “ Coming in here, I just wanted to have fun. I wanted all the guys to have fun and be able to showcase what we all can bring to the team individually. That’s what I wanted to do, showcase that I can rebound, defend, make some shots, make some plays. I feel pretty good about how it went."

“Jimmy’s done a great job since he’s been here, but there are certainly guys that when the lights come on, their personality comes out a little bit more,” Arkansas coach Eric Musselman said. “And certainly if I could save three guys that when the lights come on, or when we’ve gone more live scrimmaging behind closed doors in practice, Jimmy and Connor and Isaiah have been three guys that seem … again, we haven’t done anything other than a few live segments in practice, and then today, but those three guys seem to like the lights being on.”

There was a crowd estimated around 5,000 that included legendary former Arkansas coaches Eddie Sutton and Nolan Richardson, as well as several recruits.

“It was cool for me because I have never played there,” Whitt said. “I have never really been in there. I know for a lot of people, a lot older than I am, it was cool to get back in there, get another game feel in there. For me to come in there and see the atmosphere we had in there just for another Red-White Game, it was amazing. I loved it.”

Whitt, who averaged 12.3 points, a team-leading 6.4 rebounds and 4 assists last season for SMU, came into the scrimmage just wanting to have fun.

“I think the biggest thing I learned through my college career is that it’s the little things that win games and everybody has to have a guy on the team that’s willing to sacrifice and do the little things,” Whitt said. “That’s one of the things I want to bring - leadership but also little things like get rebounds, get offensive rebounds, guard block out, areas that we may lack in because we lack in size. I’m willing to do those things. That’s just another aspect I want to bring to the team.”

Whitt was happy for the chance to play with the 7-3, 230-pound Vanover, who hit four 3-pointers and is waiting to hear on a waiver request that will determine whether he is able to play this season. Vanover transferred to Arkansas earlier this year from California.

“I think it’s really unique what he can bring to a team because he shoots it so well from the outside,” Whitt said. “He’s 7 foot, so when you have a guy that can be under the rim on defense and use that length to affect a guy’s shot, and then on the offensive end be such a threat to stretch the floor.

“It helps out guys like me when we’re in a pick-and-roll situation. I can come off it and get to the basket because he’s bringing a (center) all the way out there. He brings such a unique aspect. I wish he could play this year. I wish he was eligible right now because it’s so unique to have him out there.”

“Reggie is a presence, physical, athletic,” Whitt said. “You don’t get a combination like that too often with a guy that has good size, athletic, can do the things he does on that block. He’s a presence and I think we’re really going to need that this year, especially from his position.”