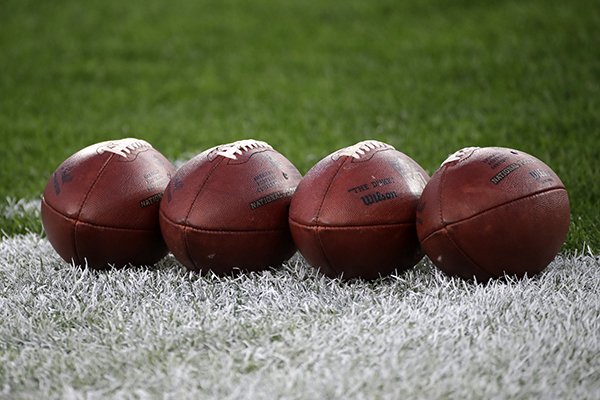 Photo by The Associated Press

Five days after playing his first game on the varsity level against Pea Ridge, Virginia Tech offered Chamblee. The University of Arkansas, Tennessee and TCU also have offered the talented prospect since. Oklahoma and Florida have inquired about him.

"He had a good day at the office against Pea Ridge," Maumelle Coach Kirk Horton said. "He's large, and he's very agile. He was really finishing some blocks in the game."

His athleticism and size make him a prospect who has the ability to rise to the top of his class.

"There may be 50 of them in the whole country that are that big and that agile," Horton said.

Chamblee, who had four pancake blocks and five knockdowns in the first four games, was giddy after receiving the Virginia Tech offer.

"I was so excited, I didn't go to sleep that night," Chamblee said. "I'm just taking it all in and come out here and push myself harder."

He received his second offer while visiting the Razorbacks for the San Jose State game and talking to Coach Chad Morris in his office with his parents.

His mother got emotional.

He was born and lived in Kentucky until the age of eight, when he moved Arkansas. He grew up favoring two Tiger teams

"Probably Clemson," he said. "When I lived in Kentucky and moved down here, I would probably have to say LSU."

Chamblee, who transferred to Maumelle from North Little Rock, was named Maumelle's offensive player of the game against White Hall that the Hornets won 29-21.

Chamblee also is putting up nice numbers in the weight room.

Horton has seen Chamblee progress since arriving at Maumelle.

"You can tell when he first got here his muscles are catching up on his frame, and now that's starting to come to fruition," Horton said.

He has plans to visit Virginia Tech and TCU this month.

Chamblee has played basketball, but he might replace that sport.

"I'm thinking about it just to stay in shape for football, but I don't know because my offensive line coach wants me to wrestle," Chamblee said.

He has a 3.5 grade-point average and is considering studying chemical engineering or going into the medical field.

"My stepmom is an RN nurse, and I'm just really good in science," he said.