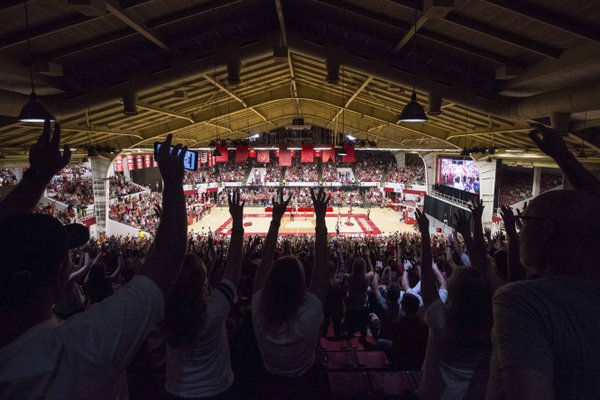 Fans call the Hogs on Saturday, Oct. 5, 2019, during the annual Arkansas Red-White Game at Barnhill Arena in Fayetteville.

FAYETTEVILLE -- University of Arkansas Coach Eric Musselman liked a lot of what he saw in his basketball team's Red-White game Saturday in Barnhill Arena.

"I thought this was really good for us," Musselman said. "The training camp time segment is one where you're going against each other every day behind closed doors, and you're doing a lot of skeleton work or five-on-zero work and a lot of drills that are contact.

"To be able to play in front of fans and have the lights on with referees, much needed after grinding the whole summer and then into this segment for us."

The Razorbacks will play their first of two exhibition games Oct. 20 against the University of Arkansas at Little Rock in Walton Arena.

"Now we have a two-week stretch before we get to compete again," Musselman said. "This will be a great opportunity for our staff to individually watch some film with guys and also to watch it collectively as a team and try to clean up some of the areas from an execution standpoint."

"Offensively, we're probably a little bit ahead of where I thought we might be, as far as spacing," Musselman said. "Pleased with the performance and the guys picking up the offensive terminology in such a short period of time."

[Video not showing up above? Click here to watch » https://www.youtube.com/watch?v=HUCR5GqTj6I

"I think overall we definitely did a lot of good things, and we did and some things we can definitely fix," Joe said. "But the goal was to go out there and have fun the first time fans are seeing us play.

"I think we came out with a lot more energy in the first half than [the opposing team], but in the second half it was vice versa. But overall I thought it was a good debut."

The teams switched jerseys at halftime so all of the players wore red and white in honor of Team Eddie (Red) and Team Nolan (White). The teams were named for Eddie Sutton and Nolan Richardson, former Arkansas coaches who were both in attendance at the game.

That original Red team held on to win 62-54 when the team that started in White, led by sophomore forward Reggie Chaney, had a 33-18 second-half advantage.

"I think the first half, we were too much one on one," said Chaney, who had 19 points, 3 rebounds, 3 assists and 3 steals. "We weren't playing together, and then we came together as a team and said we've got to move the ball more and get people open.."

Musselman said each team having its runs wasn't a surprise.

"The one thing in basketball -- it's something that I repeat all the time -- is my dad used to always talk about, 'There's three runs in every game. The team that controls two of the three runs usually wins,' " Musselman said of his late father, Bill, who was an NBA and college coach. "That's been about 90% accurate since I was a little kid and heard that sentence come out.

"I think the other group coming out of halftime, they knew they had to go make a run and they put some points together and had some defensive stops and all of a sudden the flow of the game starts changing a little bit.

"Then the team that got up a lot, I thought they kind of relaxed for the first five or six minutes of that third quarter."

Senior forward Adrio Bailey, playing on the same team as Joe, Whitt and Vanover, had eight points and seven rebounds. He was 3 of 6 from the field, but showed poor shot selection on two attempts, according to Musselman.

"I thought Adrio did a great job of slashing and getting extra possessions," Musselman sid. "He took two mid-range shots that we don't feel are in his wheelhouse so to speak, and we discussed that with him."

Whitt, a 6-3 graduate transfer from SMU, hit 7 of 9 shots along with being the team's second-leading rebounder.

"I thought Jimmy did a great job rebounding the basketball," Musselman said. "I liked how he didn't force the issue from an offensive standpoint."

The announced crowd was 4,559 for the game in Barnhill Arena, where the Razorbacks hadn't played basketball since the 1992-93 season. It is now the home venue for the volleyball and gymnastics teams.

Musselman and the UA administration decided it would add interest to the Red-White game to have a throwback event in Barnhill Arena.

"I thought it was a great crowd and they stayed until the end," Musselman said. "At halftime, I said to one of the coaches, 'I wonder what's going to happen when we walk out there. Is it going to be half empty?' "

Most fans stayed for the entire game.

"It seems like people are intrigued by the guys on the floor and wanted to watch our ballclub," Musselman said. "But nothing's going to be real pretty at this time for anybody in the country."