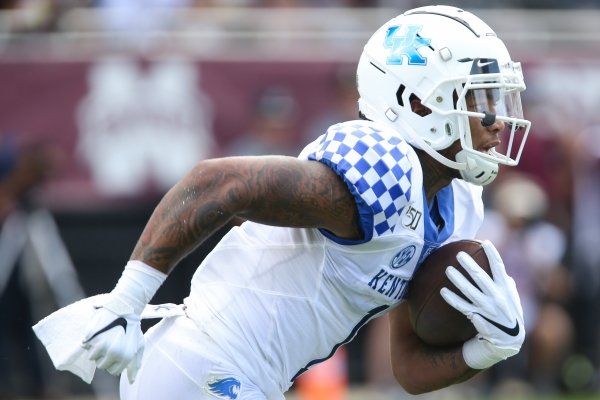 FAYETTEVILLE — Arkansas' aim is to focus on how it plays, not who it plays, on a given Saturday.

First mention of that program mantra came early in Razorbacks coach Chad Morris' press conference on Monday as he provided updates on bye-week happenings and preparations ahead of the team's road trip to Kentucky this weekend. Shortly after came a statement that the Wildcats, losers of three consecutive games in SEC play, are better than their 2-3 record might indicate.

That is the case, Morris added, because of a handful of playmakers on both sides of the football. Offensively for Kentucky, it begins with junior receiver Lynn Bowden, the team's leading receiver in 2018 who has been asked to expand his role in recent weeks as the Wildcats battle a shaky quarterback situation following starter Terry Wilson's season-ending knee injury in early September.

"We anticipate him being all over the field, whether it be quarterback, running back, wide receiver," Morris said of Bowden. "I mean, he’s electric. He’s definitely a difference maker and definitely one of the top players in this conference - a former high school quarterback."

Bowden has been a do-it-all talent this season. He has passed for 39 yards on four attempts, including a 32-yard completion against Eastern Michigan, rushed for 99 yards on 13 carries, mostly in the Wildcat formation, and caught a team-high 30 passes for 348 yards and one touchdown.

Bowden, who spent the bye week in the Kentucky quarterbacks room, took over the team's offense on the final drive against South Carolina in Week 5. Sawyer Smith, the junior who took the reins from Wilson, has dealt with numerous injuries and turnover troubles. He threw three interceptions in the Wildcats' home loss to top-10 Florida and completed only 26 of 73 passes (35.6 percent) in losses at Mississippi State and South Carolina.

Smith played with wrist and shoulder injuries against the Gamecocks and suffered a lower-body injury in the game as well, according to the Louisville Courier Journal. He is expected to be available against Arkansas, Kentucky coach Mark Stoops said Monday.

Regardless, Bowden, listed only as a starter at receiver on the Wildcats' most recent depth chart, remains the biggest offensive threat to the Razorbacks.

"He’ll be all over the field, and we’re prepared for that. The guy is definitely a difference maker. Very impressive to watch."

Formerly a four-star athlete who totaled more than 3,600 yards and 57 touchdowns as a senior at Warren Harding in Youngstown, Ohio, Bowden has enjoyed his stints at quarterback, Stoops said.

Former Iowa basketball player (2015-18) and senior receiver Ahmad Wagner is another skill player of note Arkansas is hoping to limit. Wagner, who has drawn 10 defensive pass interference penalties on 33 career targets, is second behind Bowden in receiving yards this season with 248 on only 12 catches. He contributed three catches for 70 yards and a score against Florida on Sept. 14.

Arkansas defensive coordinator John Chavis said Wagner brings a lot to the table for Kentucky, including great hands and size at 6-5, 238 pounds.

"The best thing he does is when you get him in a situation where it's a 50-50 ball," Chavis noted. "He can go up and get it. He makes those plays and (it is) certainly very impressive when you watch a big guy like that who is really athletic as he is."

One of the Razorbacks' primary objectives during the bye week was to heal various injuries ahead of a tough stretch in conference play. Senior defensive tackle McTelvin Agim, who did not take part in the open portion of practices during the bye week because of a knee injury, is expected to be full-go for Kentucky, Morris said. Agim practiced without restrictions on Sunday.

Freshman defensive end Mataio Soli (10 tackles) could also have the cast on his right hand removed this week. He has worn the wrap since Week 2 after fracturing a bone in the hand in the fourth quarter of the season-opening win over Portland State. Freshman Zach Williams is also back and in the mix following a knee injury that forced him out of the San Jose State and Texas A&M games.

"I don't know that he could be more competitive," Chavis said of Soli. "That's who he is and the way he plays. ... He knows how because of the coaching he got before he got here. Certainly he's got to get better from a technique standpoint, but he knows how to compete."