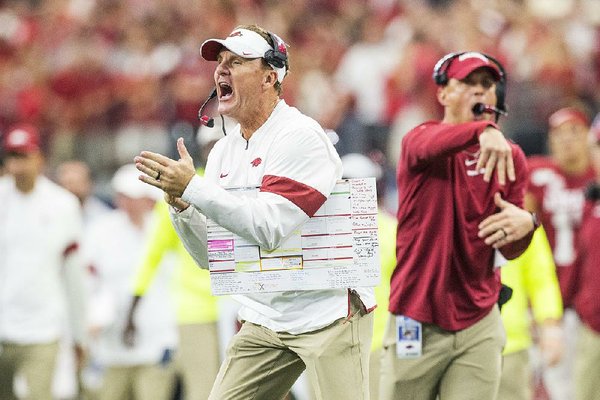 Coach Chad Morris created quite a buzz by arriving at one of the top games in Texas via helicopter when he showed up at the Pleasant Grove versus Carthage contest on Friday night.

Morris joined associate head coach Jeff Traylor, who visited both schools prior to the game.

“It’s awesome knowing that they care about us recruits enough to have the head coach fly out to watch us,” said Jackson, who visited the Hogs for the Fall Kickoff Cookout in late July. “I was really glad he came to watch.”

Razorback commitment and ESPN 4-star offensive lineman Ty’Kieast Crawford, 6-7, 323, helped Carthage to a 35-14 victory over Pleasant Grove. He was disappointed he wasn’t able to a ride with Morris.

“My thought was that it was pretty nice, just kinda mad at him because I couldn’t hop in, but it’s cool,” he said laughing. “I wish he could’ve said ‘Hey’, but at least he was there and it was great.”

“When I saw him flying in, I was just like mind blown, thinking I gotta play great for coach,” Phillips said.

Dixon, who had 84 receptions for 1,288 yards and 17 touchdowns as a junior, had seven carries for 67 yards and 5 catches for 63 yards and a touchdowns in the Bulldogs’ victory. He and Crawford are hoping to visit the Hogs for the Auburn game on Oct. 19.

He said it was a spectacle when Morris arrived.

“That was awesome him flying over and everyone watching them land,” said Dixon, who ESPN rates a 4-star prospect.