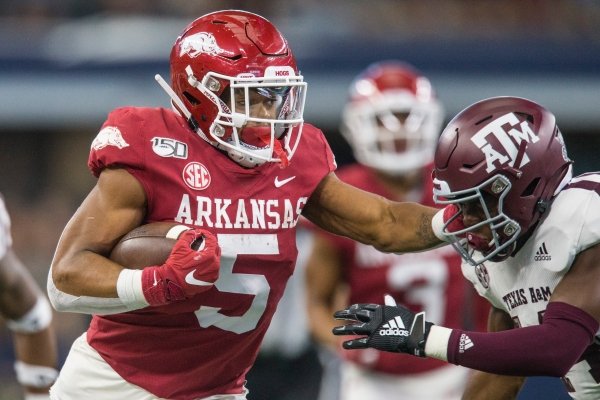 FAYETTEVILLE — Through five games, Arkansas running back Rakeem Boyd believes he has had an OK junior season.

His rushing numbers, when compared to other backs in the Southeastern Conference and even across the country, tell another story. The Razorbacks' lead back has rushed for 483 yards and three touchdowns in 2019, and he is averaging better than five yards per touch.

Entering this weekend's trip to Kentucky, a team that has lost three consecutive games in league play following a 2-0 start in nonconference, Boyd is No. 3 in the SEC in rushing and 13th nationally, currently in a tie with TCU's Darius Anderson. Boyd, though, wants more, and feels as if he should have been more productive in the first month's worth of games.

"I don’t think I’ve done as well as I could, but I think I’m doing pretty good right now," Boyd said Tuesday.

A star on the field in his time at Independence Community College, Boyd carried a different demeanor into his second season at Arkansas. The game appears to mean more in 2019. Razorbacks running backs coach Jeff Traylor said during the bye week that Boyd has been emotional, in tears even, following the team's three losses this season.

Boyd has learned something from each loss, he said.

"I’m taking them pretty hard," Boyd added. "I take every loss we had and look at what I did and see what I could have done better. There are a few things each and every game. I think there are about three games we should have won this year if we had just left it on the field."

Boyd was among a number of offensive players - high-mileage guys, according to Chad Morris - who saw their load lightened during the bye week, and after slightly injuring his shoulder in the loss to Texas A&M, he used the downtime to heal and re-energize. His body feels fresh, like it did at the beginning of the season, he noted.

Last October, Boyd burst onto the scene and became the Razorbacks' go-to tailback with three 100-plus yard efforts against Alabama, Ole Miss and Vanderbilt. He also rushed for 99 yards in the 23-0 win over Tulsa. Boyd is hoping to have the same impact in the running game this time around, too.

Morris, on Monday, lauded the play of Boyd, who has totaled at least 89 rushing yards in four of five games this season and hit the 100-yard mark in wins over Portland State (114, TD) and Colorado State (122, 2 TD).

"I think Rakeem’s had a very productive year to this point," Morris said. "I think that he is running the ball well, he’s catching the ball well. He’s doing a lot of really good things and I know he’s got to continue to refine his game and stay healthy and make the plays when he’s called on."

Arkansas' run game and its offensive line will be tested Saturday by a Wildcats defensive front that features nose tackles Quinton Bohanna and Marquan McCall, who stand 6-4, 361 pounds and 6-3, 371 pounds, respectively. Kentucky, however, ranks 13th in the SEC in run defense, giving up an average of 171.2 yards per game. It has also allowed a league-high 12 rushing touchdowns.

Boyd, who has watched "a lot" of film of Kentucky's defense over the last week, added the Wildcats look sound defensively. Linebacker Kash Daniels (138 career tackles) is also a player to watch as one of the best in the SEC at his position.

"All the guys run to the ball," Boyd said. "They don’t really miss that many tackles. They had game against South Carolina. I watched the whole thing. They missed a few, but they got a bye week. They're well rested just like we are."