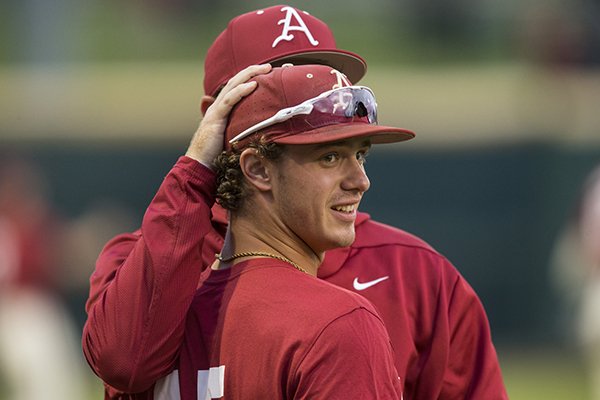 Arkansas shortstop Casey Martin is shown during a scrimmage against Oklahoma on Friday, Sept. 20, 2019, in Fayetteville.

FAYETTEVILLE — Arkansas shortstop Casey Martin will be out for the rest of fall practice after breaking a bone in his hand.

Martin, a junior, broke the hamate bone in his left, nonthrowing hand while batting during practice late last month and had surgery to repair the injury Monday, a team spokesperson said. Martin is expected to be able to swing a bat again in 4-5 weeks.

The Razorbacks begin preseason practice in January and are scheduled to open the season Feb. 14.

The injury is the second this year for Martin, who nursed a shoulder injury while not playing competitively this summer. Martin batted .286 with 15 home runs and 57 RBI, and fielded .912 with an SEC-high 23 errors as a sophomore in his first season playing shortstop.

Martin is a top draft prospect in 2020. Baseball America recently projected him to be drafted sixth overall by the Seattle Mariners next year.