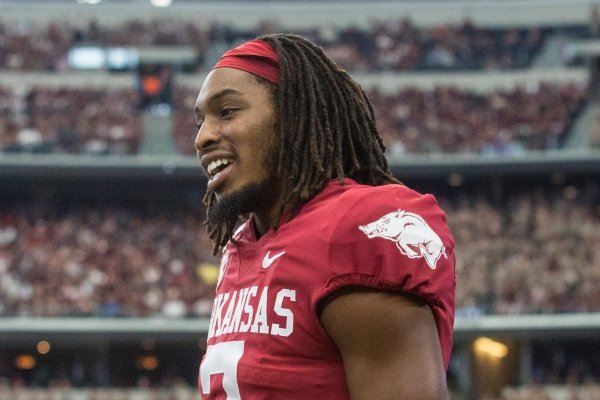 Trey Knox (right) laughs with Karch Gardiner, both Arkansas wide receivers, on the bench in the fourth quarter vs Texas A&M Saturday, Sept. 28, 2019, at AT&T Stadium in Arlington, Texas.

FAYETTEVILLE -- The University of Arkansas' first open date had a huge side benefit in addition to the extra week to prepare for Kentucky, further developing the Razorbacks' younger players and capitalizing on a weekend of on-site recruiting.

The week was great for the wide receiving corps, which had been ailing since before the start of the season.

If all the Razorbacks' receivers continue their recoveries on pace, Arkansas will be healthier at that position when it kicks off at Kentucky on Saturday at 6:30 p.m. as it has been since the season kicked off on Aug. 31. Senior Deon Stewart won't be back after undergoing knee surgery early during training camp, but the rest of the unit could be in action.

"We got guys back healthy," Arkansas Coach Chad Morris said at his weekly press conference Monday. "Should be a full capacity in our wide receiver room for the first time in quite some time, which is good to see."

Junior Jordan Jones is in position to make his 2019 debut after recovering from a high ankle injury that required surgery during training camp.

Additionally, Trey Knox and Mike Woods should be good to go after dealing with hip injuries, while junior De'Vion Warren is expected back from concussion protocol. Knox had been slowed with hip soreness since taking a couple of shots in a Week 2 loss at Ole Miss and it kept him out of the Razorbacks' 31-27 loss to Texas A&M on Sept. 28.

Woods played a ton of snaps against the Aggies and grabbed four passes for 62 yards and a touchdown. He was in a yellow (no participation) jersey last week while resting his hip issue.

Jones wore a green (no contact) jersey at practice last week, but the 6-1, 185-pounder from Smackover is nearing 100 percent.

"I'm hoping to have Jordan," Arkansas offensive coordinator Joe Craddock said. "The other day, coming out of practice he was kind of sore.

"But any time you can get a wideout back and take the reps off other guys to keep them fresh, that's good."

Returning receivers would help keep the crew fresher later in games. Woods played 71 snaps against Texas A&M, while sophomore Tyson Morris logged 50-plus snaps, including some at spots he had rarely played before.

The Razorbacks have gotten big production from underclassmen at receiver throughout their 2-3 start.

True freshman Treylon Burks, who missed one game while on concussion protocol, is fourth on the team behind tight end Cheyenne O'Grady with nine catches for 172 yards. He leads the team with 19.1 yards per catch.

Knox, Woods and O'Grady all rank in the top 20 in the SEC in receiving yards.

"Three of us in the top 20? ... That's awesome," receivers coach Justin Stepp said. "We've got a long way to go in my group. We're young but we've got a chance to be pretty special if we just keep working on it every day."

Burks had a mistaken assignment that wiped out his own would-be 50-yard catch against Texas A&M, so he's got improvement to do on pre-snap work. However, his physical skills and tackle-breaking are uncommon for a rookie.

"He's really special," Stepp said. "Obviously he's gifted. He's a big kid; big enough to play in this league already from the weight standpoint and height. If I can just get him to quit bullying. He tries to bully and run over everybody, which is something different than you usually have in the room.

"But the best thing about the kid is he works hard every single day. He brings it every single day and raises the level of the competition in the room and I'm really proud of him."

Texas A&M Coach Jimbo Fisher was complimentary of Burks both before and after playing the Razorbacks.

"He looks like he has a tremendous future if he continues to work and keep improving each and every year," Fisher said last week. "But he's definitely made an impact as a freshman, and a significant impact."

Jones has 38 receptions for 592 yards and 4 touchdowns in two seasons, as well as 97 rushing yards on 9 carries.

"We hope he'll provide an opportunity to stretch the field vertically for us, even more than what we've done," Morris said. "He's obviously one of the fastest players on our team."

Jones has actually tested as the fastest Razorback.

"Jordan, on film, has shown he's able to ... run by people," Craddock said. "Hopefully he's healthy and hopefully we'll be able to use him some."