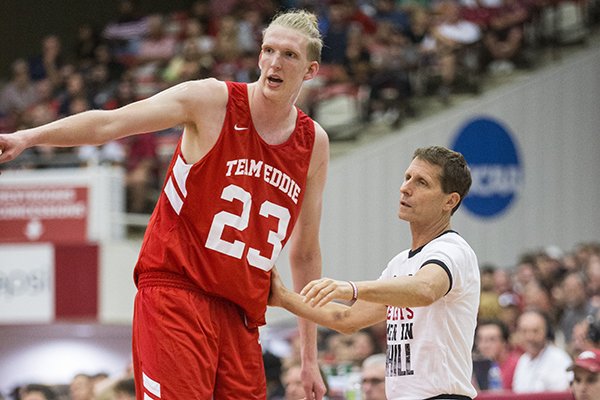 The Arkansas football and basketball programs are expected to host prospects for visits in the near future.

Small forward Keon Ambrose-Hylton and his mother plan to arrive in Fayetteville on Friday for the start of his official visit.

Ambrose-Hylton, 6-8, 196 pounds, of The International Sports Academy in Willoughby, Ohio, narrowed his more than 25 scholarship offers down to Arkansas, Dayton, Alabama, North Carolina State and Southern California. ESPN rates him a 4-star prospect, No. 14 small forward and No. 58 overall recruit in the nation for the 2020 class.

ESPN rates Moody a 4-star prospect, No. 9 shooting guard and No. 29 overall prospect in the nation for the 2020 class. He plans to officially visit the Hogs for the Auburn football game on the Oct. 18-20 weekend.

ESPN rates Love a 5-star recruit, No. 4 shooting guard and No. 16 overall prospect in the nation for the 2021 class.

Highly touted junior cornerback Keaun Parker, 5-11, 170 of Tulsa Washington plans to make an unofficial visit to Arkansas for the Auburn game. He has offers from Arkansas, Oregon, Baylor, Iowa State, Kansas and others.

Junior power forward Zach Clemence and his mother are looking at dates for a future visit to Arkansas.

Clemence, 6-10, 205 of Sunrise Christian of Bel Aire, Kansas has offers from Arkansas, TCU, Oklahoma, Baylor, Nebraska and others.

Junior college cornerback Ronald Williams Jr., 6-3, 190 of Hutchinson Community College in Kansas received an offer from Arkansas on Monday. He also has offers from Texas A&M, Kentucky, Oregon State, Texas Tech, West Virginia and others. He plans to be a December graduate.

He and Smith are talking about a possible official visit.