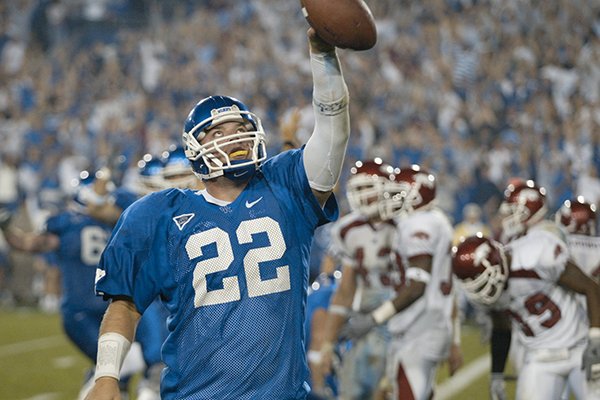 No pun intended, but it is going to be a huge weekend in Lexington, Ky.

The Kentucky Wildcats are coming off an open weekend after three consecutive SEC losses. This is a team that won 10 games last season, and defeat is bitter.

It is homecoming, which is never an honor for a visiting team.

But most of all, the game is being dedicated to the memory of Jared Lorenzen, No. 22 in the program and No. 1 in the hearts of many in Big Blue Nation.

Fans can get $22 off the price of 200-level sideline tickets Saturday, and commemorative rally towels will be handed out at the gates.

Lorenzen died July 3 at the age of 38. He admitted to weighing more than 500 pounds at time in his life, almost double his 285-pound playing weight when he was the heaviest quarterback in the NFL.

His heart and kidneys gave out.

Lorenzen was always big. He weighed 13 pounds when he was born, and he just never stopped growing.

He’s the all-time leader in passing yards at Kentucky with 10,354, but he’s remembered more for his likable personality and charm.

Every time there was a new nickname such as “Hefty Lefty” or “J Load” or “Pillsbury Throwboy,” he always laughed the loudest.

Lorenzen forever will be remembered for the 2003 game against the University of Arkansas.

Arkansas was leading 21-7 at the half, and as Lorenzen headed for the locker room he noticed a lot of Kentucky fans leaving the stadium.

He stopped and yelled: “Where the hell ya’ll going? Ya’ll are going to miss one hell of a game.”

Shortly after Lorenzen’s death, former receiver Derek Abney said: “It was motivating to hear our leader say, ‘Listen, you can give up on us, but we’re not.’ “

The Wildcats got the only score of the third quarter, a 51-yard touchdown pass from Lorenzen, and Kentucky scored first in the fourth quarter with a field goal to make it 21-17.

The Razorbacks answered with a field goal, but Lorenzen drove the Wildcats 79 yards in nine plays, hitting Chris Bernard for a 13-yard touchdown to tie the game with 1:45 to play.

Both teams scored a rushing touchdown in the first overtime.

Kentucky scored another rushing touchdown in the second overtime, and Matt Jones answered with a 10-yard touchdown pass to Jason Peters.

In the third overtime, both teams had field goals. In the fourth overtime, Lorenzen ran for the first of his three rushing touchdowns in overtime. Jones tied it on a 3-yard run.

Jones passed 15 yards to George Wilson in the fifth overtime, but the mandatory two-point conversion failed.

Lorenzen tied it on a 2-yard run, but he threw incomplete while under pressure on the two-point conversion.

In the sixth overtime, Lorenzen again ran for a touchdown and passed complete for two points to make it 63-55.

Mark Pierce scored for the Hogs, and Jones passed to Wilson to make it 63-63.

DeCori Birmingham ran 25 yards for a touchdown in the seventh overtime, and Jones passed to Peters for the two-point conversion. The defense finally held Kentucky.

The Wildcats didn’t win, but Lorenzen has been remembered for his promise of a great game, his love for UK and his personality. He finished that game 28-of-49 passing for 326 yards, and he accounted for 5 touchdowns.

Lorenzen, because of his weight problems, was not drafted, but he made the New York Giants roster as Eli Manning’s backup and collected his Super Bowl ring in 2008. He also played in AF2 for four years.

On Saturday, most of the state of Kentucky hopes his memory will inspire the Wildcats to a win over Arkansas.