Nowhere for UK to go but down 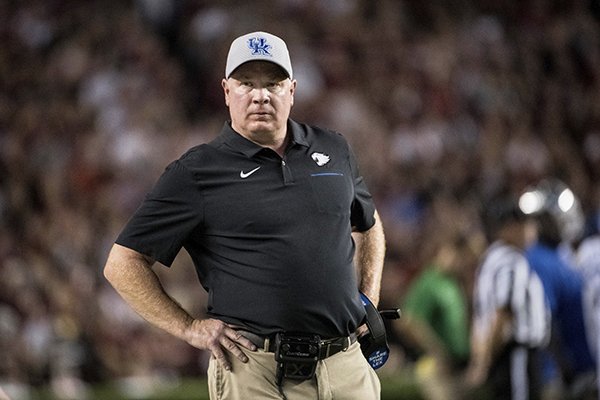 FAYETTEVILLE -- Kentucky has matched or improved upon its total of victories in each of Mark Stoops' previous six seasons as coach -- the only Football Bowl Subdivision team to accomplish that feat, according to UK's notes.

But odds of the Wildcats extending that streak to seven seasons aren't good.

Kentucky (2-3, 0-3 SEC) must win out -- starting with Saturday night's game against the University of Arkansas at Kroger Field -- to equal last season's 10-3 record.

It was Kentucky's most victories since 1977, when the Wildcats finished 10-1. Last year's team was led by senior outside linebacker Josh Allen and running back Benny Snell.

Allen, the national defensive player of the year, was a first-round NFL Draft pick by Jacksonville. Snell was a fourth-round pick by Pittsburgh.

Kentucky's memorable season included ending a 31-game losing streak to Florida with a 27-16 victory on the road, and beating Penn State 27-24 in the Citrus Bowl.

Sawyer Smith, a junior, replaced Wilson as the starting quarterback, but he's been battling shoulder, wrist and ankle injuries.

"It's definitely a challenge. I don't think there's any doubt about that," Stoops said of Kentucky's rough start in SEC play. "We had high expectations for this season, and things have gone the way they have.

"But I've been very proud of our team. The guys are very determined to get things fixed. That's the mentality of this team, to fight our way out of this."

Smith suffered an injury in his "lower extremity," as Stoops put it, that prevented him from finishing Kentucky's most recent game at South Carolina, which beat the Wildcats 24-7 on Sept. 28.

After an open date that allowed Smith extra time to recover, Stoops said he expects the junior graduate transfer from Troy to start against Arkansas. But Stoops left open at least the possibility of Lynn Bowden, a junior receiver, starting at quarterback if Smith isn't ready.

Bowden played quarterback late in the South Carolina game and led the Wildcats on their only touchdown drive.

In Smith's first start against Florida, he completed 23 of 35 passes for 267 yards and 2 touchdowns, but he also had 3 interceptions.

Against Mississippi State and South Carolina, Smith combined to complete 26 of 73 passes (35.6%) for 322 yards and 2 interceptions without a touchdown.

"He's holding up just fine," Stoops said of Smith's mindset. "He's a resilient young man. Really important for him to do the best he can and to help his team.

"We will obviously monitor him very, very closely to make sure we don't put him in harm's way. It's a long season, and we need him back healthy and playing like he did in the Florida game."

Bowden, who played quarterback at Youngstown (Ohio) Warren Harding High School, has career totals at Kentucky of 116 catches for 1,415 yards and 6 touchdowns, and 37 carries for 198 yards. He has completed 6 of 10 passes for 131 yards. He also has 66 kickoff returns for 1,525 yards, and 9 punt returns for 224 yards and 2 touchdowns.

"We anticipate Lynn Bowden being all over the field, whether it be quarterback, running back, wide receiver," Arkansas Coach Chad Morris said. "I mean, he's electric. He's definitely a difference-maker and definitely one of the top players in this conference."

Bowden told reporters in Lexington last week he was ready to play quarterback if needed, even though he's expected to be a receiver in the NFL.

"I'm a team player. I'm a winner," Bowden said. "I don't like losing, so if I've got to go back there to play quarterback to win and then get myself ready [for the NFL], then that's what I've got to do."

"Any great player wants the game to go through him, so what better way than quarterback," Stoops said. "You touch the ball every snap."

Bowden, who this season has 30 catches for 348 yards, isn't Kentucky's only playmaker on offense.

Sophomore linebacker DeAndre Square leads the Wildcats with 35 tackles and is one of nine players with at least one sack. Sophomore defensive end Joshua Paschal and junior linebacker Jamar Watson each have four tackles for lost yards.

Junior punter Max Duffy is a big weapon on special teams, averaging 51.2 yards on 23 kicks to lead the nation. He has eight punts of more than 50 yards with a long of 63.

"Our team is going to be hungry to play this game," Stoops said. "It's been a tough stretch, but this [open date] gave us an opportunity to hit the reset button, kind of reload, and get ready for this next phase of the season."