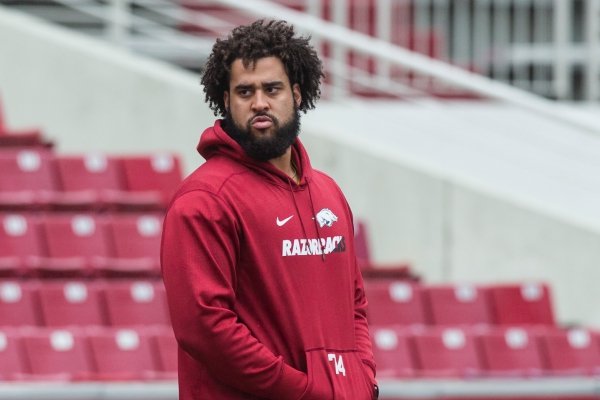 Arkansas continued its Kentucky prep Wednesday afternoon outside Walker Pavilion. Here are a few notes from the open viewing window, plus tidbits from the media session with Chad Morris prior to practice:

• Earlier this morning on the SEC teleconference, Morris said center Ty Clary would be out of his green, no-contact jersey and full go. Clary continued to wear the green jersey Wednesday, as he did yesterday. He has been in concussion protocol since sometime after the Texas A&M game. Senior left tackle Colton Jackson (concussion protocol) was not present at practice today. Morris, who said he wouldn’t have a problem putting Myron Cunningham in his place, was asked about Jackson’s availability should he be able to return by Thursday:

“It all depends on where we are and if we feel he’s confident playing. We’d like for our guys to go through practice as much as possible if we can and get some type of run-through and some type of contact on them. We’re just going to wait and see.”

• Running back Devwah Whaley was not present on Wednesday. Whaley participated in practice on Tuesday and went through the team period versus the first-team defense. There has been no word on his status, and Morris did not mention Whaley prior to practice. The senior has run for 148 yards and three touchdowns this season, including one against Texas A&M.

• Receiver Jordan Jones is “very doubtful” for Saturday’s game, Morris said. Jones (high ankle sprain) was in a green jersey last week and transitioned to a traditional offense jersey Tuesday, but he is not moving around well at all. He was on the field with the receivers, but he did not run routes on air with the rest of the group. I saw him get some light jogging in between the turf and natural-grass field at this time.

• Freshman defensive lineman Mataio Soli still has the club on his right hand. There was talk from Morris and John Chavis earlier in the week that he may have that removed at some point before the game. Defensive ends coach Steve Caldwell was the first to say so during the bye week.

• As running backs and tight ends caught passes out of the backfield from quarterbacks, I saw freshman A’Montae Spivey make a terrific one-handed grab on a poorly thrown ball by John Stephen Jones. It was impressive to say the least. You wonder if Whaley is not available on Saturday if Spivey could see the field and attempt to make an impact.

• Arkansas’ offensive captain this week will be tight end Hayden Johnson, who coaches have nicknamed “The Doctor.” Johnson has not caught a pass this season, but he plays an important role on kickoff return, punt return and punt coverage. Barry Lunney has raved about Johnson’s blocking in the running game this season, too.

• Morris said he expects freshman quarterback K.J. Jefferson to travel this weekend. He added that he likes to carry young quarterbacks on road trips to expose them to different environments when numbers permit. Arkansas is allowed to travel only 70 players to road games.

• Treylon Burks and Karch Gardiner worked at punt return during the first period when Arkansas was running through its base special teams alignments.

• A scout from the Houston Texans was in attendance.

• According to Arkansas football’s official Twitter account, the Razorbacks will wear red helmets, white jerseys and red pants at Kentucky. This is the first time Arkansas has worn this uniform combination since its 38-3 loss at Auburn last season. It also wore red pants in its home loss to LSU last year.

DL Dorian Gerald (strained artery in neck, out for season)